Name of the German Moselle growing region valid until autumn 2007; see there.

The production area is located in Rhineland-Palatinate and to a small extent in Saarland in Germany. The river Moselle meanders over 237 km on its way from Trier to Koblenz, but the linear distance is only 96 km. The vineyards cover 8,798 hectares of vines, which stretch along the Moselle from its headwaters in the Vosges mountains on the border with Luxembourg to its confluence with the Rhine near Koblenz, as well as along its two tributaries, the Saar and the Ruwer. These three rivers gave the old name Mosel-Saar-Ruwer, which was valid until 2007. The oldest vineyards in Germany are located on the upper Moselle, where the Romans were already cultivating wine in the 1st century BC and founded the town of Augusta Treverorum, today's Trier, in 15 BC. In Piesport and Erden you can still see the remains of old Roman presses. The Neumagen wine ship also points out the Roman wine culture. The two Roman poets Ausonius (310-395) and Venantius Fortunatus (530-610) described the beauty of the landscape during boat trips on the Moselle. In the Middle Ages, the Benedictine order owned many vineyards along the banks of the three rivers, as evidenced by many individual vineyard names 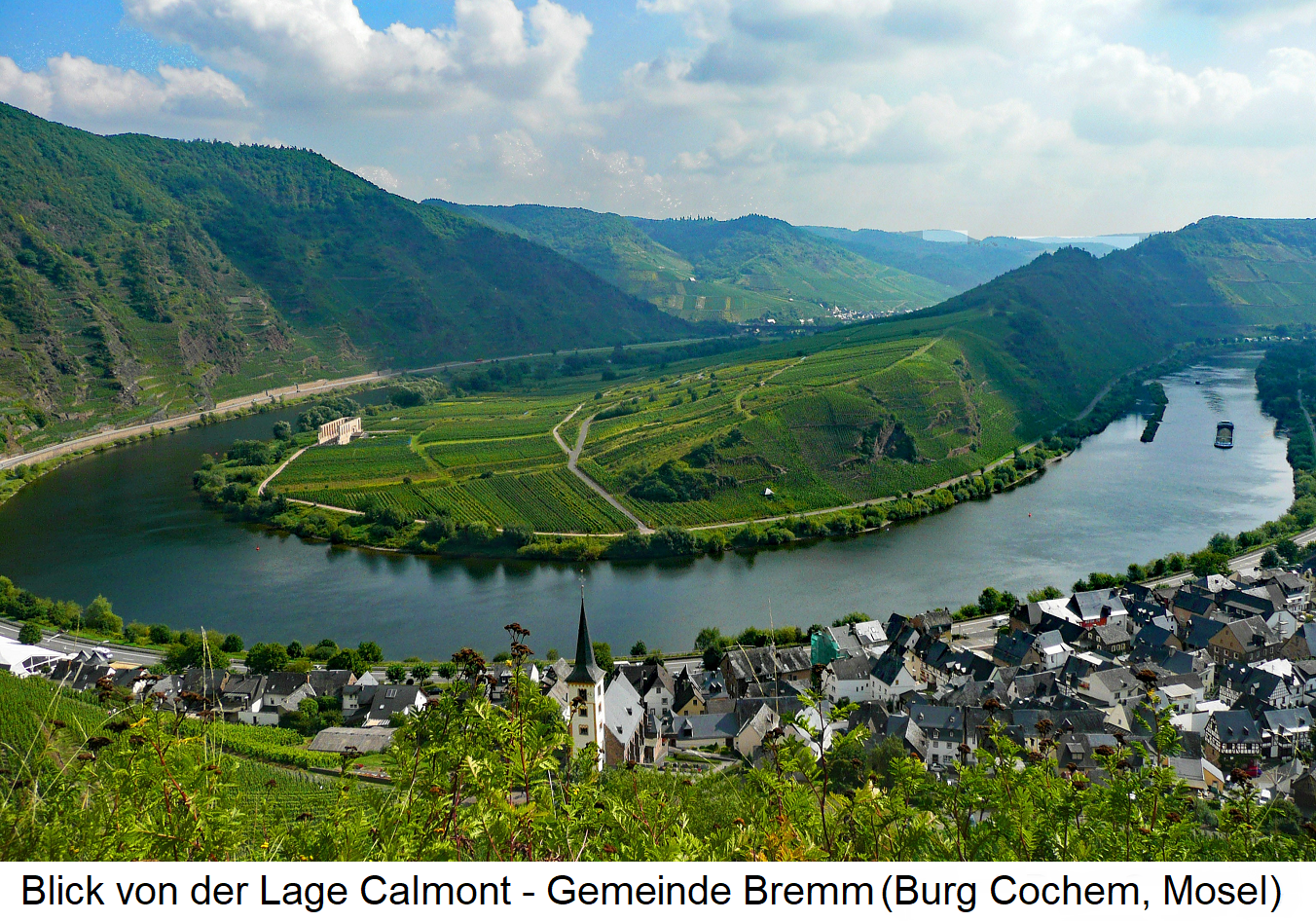 Emperor Napoleon (1769-1821) enacted a law after the occupation of this area in 1807, the negative consequences of which can still be felt today. In order to prevent large estates, he ordered the "real division" by which the property was to be divided equally among all descendants in the event of inheritance. The result was a fragmentation into innumerable, often extremely small units of land. At the Congress of Vienna in 1815, the former Kurtrian territory was assigned to the Prussian state. Subsequently, the royal government took various measures to improve the economic situation of the Moselle winegrowers. These included the Prussian classification of sites, the founding of the wine growers' association and the establishment of three wine growing domains along the Moselle and Saar, which marked the beginning of a heyday for Moselle viticulture. This continued the tradition of the great wine lover of King Frederick the Great (1712-1786), who had a vineyard planted on the southern slope of the Klausberg in the Sanssouci Park in Potsdam as early as 1769.

The growing area is one of the warmer climate zones in Germany. The Moselle, like all waters, has a positive effect or creates the conditions for this by forming valley slopes. Viticulture benefits from the ideal combination of steep, sun-drenched slopes, sun-reflecting slate soils and optimum rainfall. On some steep slopes, cultivation is only possible using special equipment and monorack tracks. Calmont is one of the steepest vineyards in the world, with an inclination of up to 68°. Due to the heat storage, frosts are largely prevented. There are only slight temperature fluctuations. As a rule, there are pleasantly warm summers and only moderately cold winters. The soils consist of shell limestone and keuper on the upper course of the Moselle, and of Devonian and argillaceous slate on the middle and lower course of the Moselle and in the valleys of the Saar and Ruwer. The dark clay slate is found in about half of the vineyards.

The slate rock stores the sun's heat during the day and releases it again at night, which ensures a mild climate. The vines are usually rooted metres deep in the soil or rock. Many small winegrowers work the often terraced steep slopes in laborious manual labor and deliver their grapes to large wineries. Moselle is divided into six areas with 19 major sites and 524 individual sites. The 242-kilometre-long Moselle Wine Route begins directly behind the German-French border in Perl, runs along the river and crosses it several times in the process. In the course of its journey it touches many famous wine-growing communities and finally ends in Koblenz. 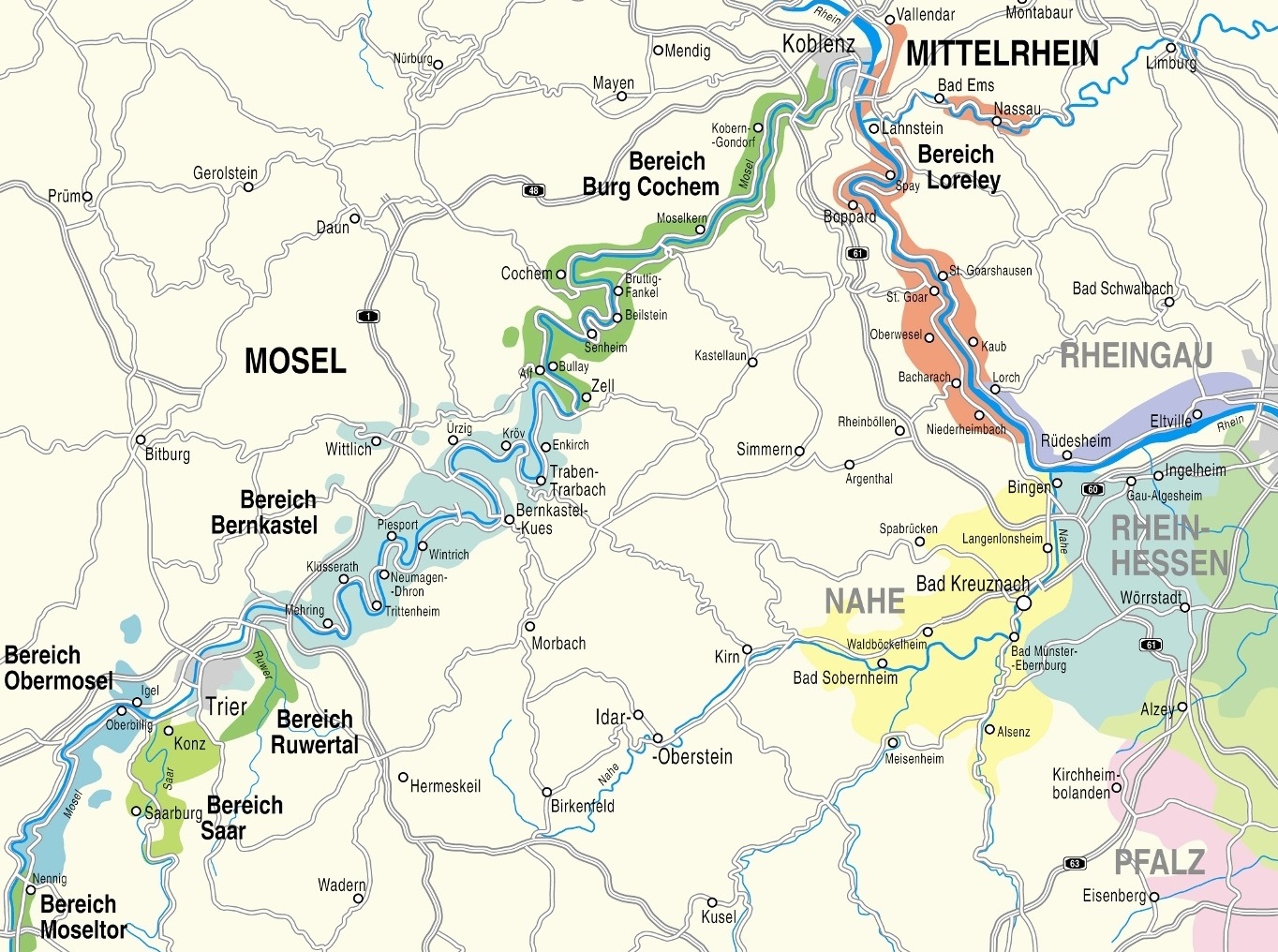 The German wine law allows the area name to appear on the label without the addition of "area", provided that there are no place names or individual vineyard names with which confusion may arise. The winegrowers of the "Saar" had already practised this from the time of the name change, but for those on the "Ruwer" this was not possible. In 2019, vineyards with the name "Ruwer" in the district of Trier-Ruwer, which were no longer being cultivated, were deleted from the vineyard register, thus making it possible to use them on the label

The range Bernkastel or Middle Moselle (formerly Lower Moselle) forms the heart of the region with the most vineyards. It stretches from Briedel in the north upstream to the Moselle metropolis Trier in the south in a length of about 50 kilometres. The Moselle flows through the area in ten relatively narrow loops. The large area comprises almost 6,000 hectares of vineyards and is divided into the ten major sites Badstube, Kurfürstlay, Michelsberg, Münzlay, Nacktarsch, Schwarzlay, St. Michael, Probstberg, Römerlay and Vom heißen Stein. The most famous Moselle communities and vineyards are located here. Bernkasteler Doctor is one of the most famous individual sites in the area and also in Germany. It is part of the renowned Badstube area with (unusually) exclusively first-class sites. The vast majority of the deep soils consist of dark blue weathered Devonian slate, often with a high stone content. In the municipality of Ürzig there is also red sandstone. The most famous wine-growing villages with their individual sites:

The area of Burg Cochem (formerly Zell) is also called Terrassenmosel after the many terraced slopes. It stretches along the lower Moselle from Koblenz to Zell and is divided into the five major sites Goldbäumchen, Grafschaft, Rosenhang, Schwarze Katz and Weinhex. The landscape is characterized by many medieval castles. The vineyards cover about 1,500 hectares of...