French name (also Cuvage or Cuvaison) for fermentation; see there.

The term for alcoholic fermentation in winemaking used to refer to the apparent "boiling" or "foaming" in the grape must. Fermentation is understood as the microbial degradation of organic substances without the inclusion of external electron acceptors such as oxygen(anaerobic) for the purpose of energy production. However, the degradation of organic substances can also take place with the inclusion of oxygen (aerobic). For example, in acetic acid fermentation, oxygen is consumed, which is why this is not a fermentation in the scientific sense as described at the beginning. The term fermentation, on the other hand, is an umbrella term in German for aerobic and anaerobic processes. This often leads to confusion because in other languages "fermentation" is used for alcoholic fermentation or there is no separate term for it.

The process was long thought to be a natural decay. The influence of air (even when oxygen had already been discovered) was not considered. Therefore, the processes involved in the transformation of must into wine, of wort into beer and of wine into vinegar were called fermentation. The involvement of microorganisms was recognised by Louis Pasteur (1822-1895) in 1857. Fermentation occurs spontaneously wherever yeast fungi come into contact with aqueous sugar solutions at an optimal temperature of between 18 and 27 °C. Usually these are fruit juices, but they can also be other substances dissolved in or added to water, such as cereals (barley, wheat, maize, rice) in the production of beer or other substances containing sugar, such as potatoes. 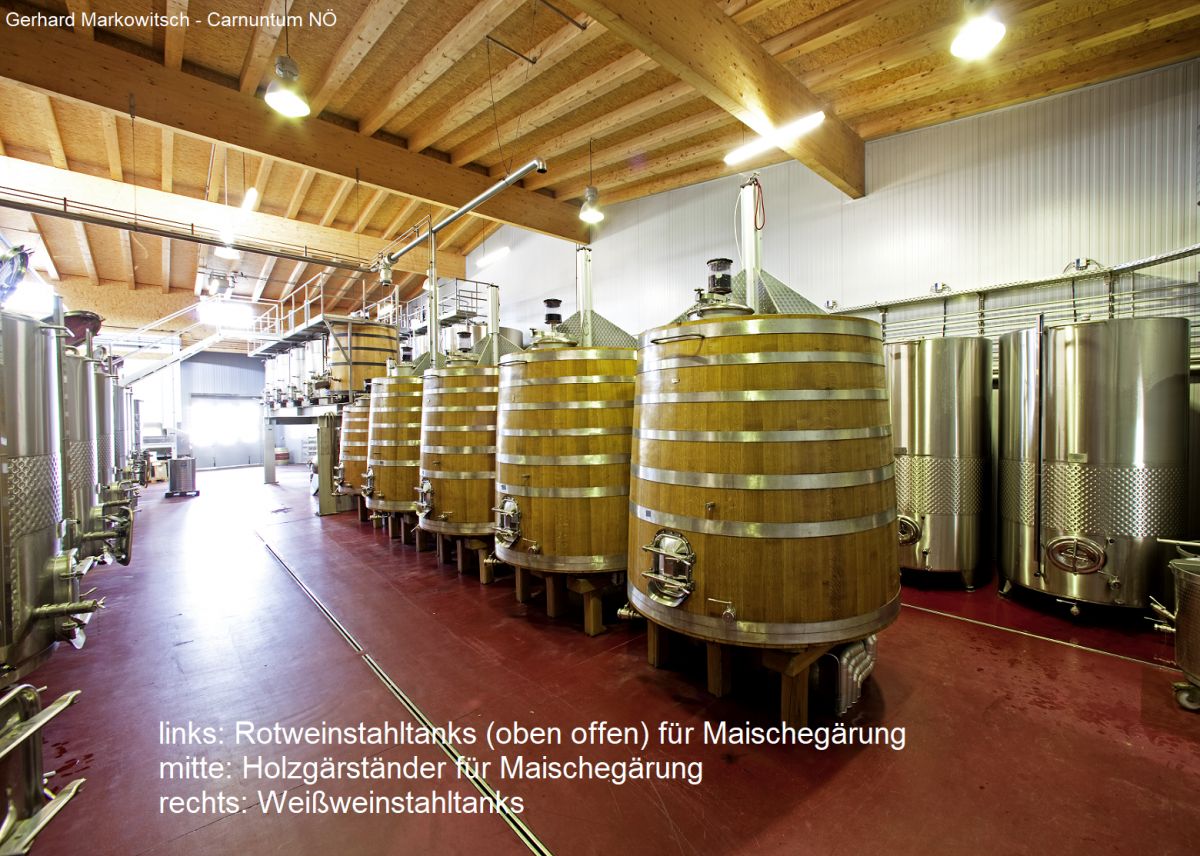 Today, wine fermentation is mostly temperature-controlled in stainless steel tanks, although in larger wineries this is also done by computer. But barrel fermentation is also used by many producers. Fermentation is the enzymatic breakdown of organic substances in an anaerobic environment, i.e. in the absence of oxygen. However, if there is a higher concentration of glucose (grape sugar) in the grape must, alcohol can also be formed in the presence of oxygen, i.e. in an aerobic environment. This is also called the Crabtree effect (or Pasteur effect) after the English biochemist Herbert Grace Crabtree. An aerobic environment with oxidative processes is also common in the production of certain wines such as port and sherry.

The yeasts play a decisive role in fermentation. After pressing, they multiply rapidly in the grape must by sprouting and dividing. Towards the end, there are 50 to 200 billion yeast cells per litre of wine. The biochemical processes are controlled by enzymes contained in the yeasts; the zymase complex is responsible for fermentation. Natural or wild yeasts are present in large quantities in the vineyard and elsewhere (air) and enter the cellar with the grapes. They can also trigger fermentation on their own, which was the usual practice in the past. In this case one speaks of Spontaneous fermentation. However, this is much more difficult to control, but is increasingly preferred especially in connection with organic viticulture in the production of organic wine.

However, pure-breeding fer mentation is still mainly used, which is initiated by means of pure-breeding yeasts (culture yeasts). These guarantee a quick, complication-free start to fermentation. If necessary, this is supported by Starterkulturstarter...