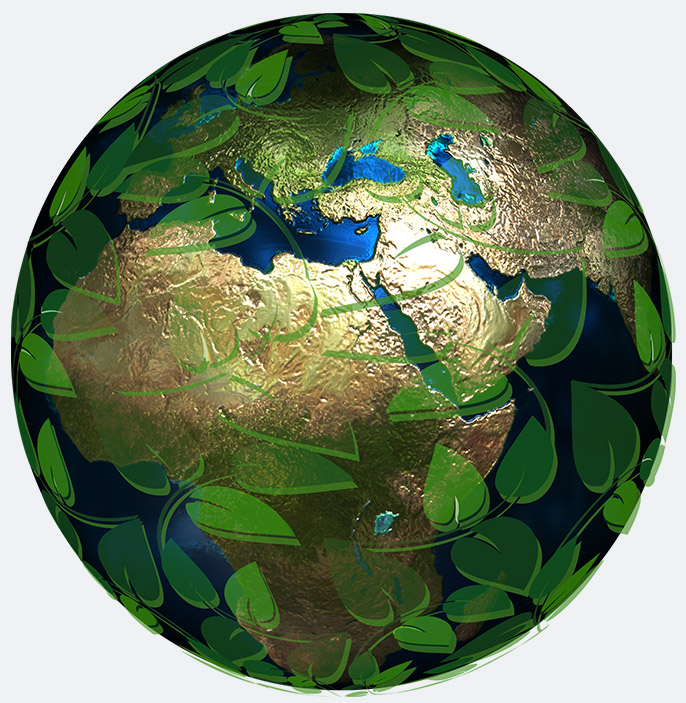 Organic, ecological or also biological-ecological viticulture means partly quite different forms of production for the production of grapes and wine on the basis of measures that are as nature-conserving as possible, taking into account knowledge of ecology and environmental protection. Confusingly, there are many similar terms such as organic, ecological, controlled organic, controlled organic, organic land/viniculture, organic land/viniculture, organic-organic, biodynamic and bio-energetic.

An often asked question is whether there is a difference between "organic" and "eco" in terms of content or law. The answer is no, the terms are used synonymously. Both are protected in connection with food and feed as well as agricultural raw materials that are produced and processed according to the guidelines of organic farming. All derivations and diminutive forms such as "organic" and "eco", alone or combined, may be used.

Care should be taken with the labels "from controlled contract farming", "extensive", "integrated farming", "controlled", "close to nature", "environmentally friendly" or "untreated" or formulations used in the same way. These terms do not indicate production or processing in the sense of organic farming. For clarification or distinction a short definition of the terms:

biology: Biology (bios = life) is the science of living beings as a branch of the natural sciences, which deals with general laws, peculiarities, organisation and development as well as structures and processes of living beings.

organic: An organ or organism belonging to living nature; forming a (harmonious) unit with something. This is to express that this sensitive relationship is taken into account in the management of the land.

biodynamic: This term first appeared in the dictionary in 1980. It is mainly used in Biodynamic viticulture and means "using only organic fertilizers, treated or fertilized only with such means (natural products)". There are also techniques that are not without controversy, such as taking into account the phases of the moon or planetary constellations.

bioenergetic: Bioenergetics (bios = life, energeia = effectiveness) as a branch of biology, biophysics and biochemistry, which deals with energy conversions in organisms. The term is used in bioenergetic viticulture. There are also not uncontroversial techniques such as music during winemaking.

integrated: In the context of a specific process this means the integration of individual measures, for example integrated pest management (KIP/IP). It is therefore a package of measures that is coordinated with regard to a specific purpose.

controlled: Compliance with the guidelines is regularly checked by responsible state-licensed and/or private institutions or associations.

In addition, there are also the terms "environmentally friendly", "environmentally conscious", "close to nature" or "sustainable viticulture", some of which are used inflationarily in brochures. They mean an approach according to certain but often not clearly and unambiguously defined ecological or biological aspects and are sometimes used as a synonym for Integrated Pest Management. However, it is not so much the designations that are important, but rather the individual guidelines and measures in detail, which are summarised below. For if a winery declares itself on the website as an "environmentally conscious, nature-oriented company", this alone does not tell us what measures are meant by this.

The most unambiguous certification is the certification as an organic farm by a licensed institution, because this makes it clear and unambiguously understandable which guidelines are valid. For such farms, this primarily defines the vineyard management, but also the cellar technology and, in some cases, upstream and downstream production processes. In connection with this, the term sustainability was created. This means a way of life that only makes use of the natural resources to the extent that they can regenerate without overexploitation of nature. An essential component as an absolute prerequisite for a stable ecosystem is the preservation of species diversity, which is described by the popular term biodiversity. This is taken into account by appropriate measures in plant protection against diseases and pests and in fertilization.

An important criterion is limited use up to the point of abandonment of chemical synthetic plant protection products(pesticides) and instead the use of plant strengthening agents or only certain approved agents. In pest control, environmentally friendly methods such as confusing methods with pheromones or beneficial organisms are used. No herbicides are used for soil care and instead synthetically produced nitrogen fertilizers, easily soluble phosphorus fertilizers and approved mineral fertilizers are used. In the case of organic production forms, all synthetically produced plant protection agents are prohibited as a matter of principle. Green manure or greening is a fixed and essential component of soil care.

Very often the measures are associated with particularly low, quality-enhancing yields (although only the normal wine law requirements apply and there are no stricter maximum yields). Certain cellar-technical measures or means are also often omitted. The fermentation is carried out by many producers as far as possible with natural yeasts from the vineyard in the form of a so-called spontaneous fermentation, but this is also not an unconditional requirement. The use of sulphur dioxide is kept as low as possible. In addition, so-called PIWI varieties (fungus-resistant) are increasingly preferred because they at least limit the use of fungicides that are harmful to the environment.

There are, however, no guidelines which are generally valid in all countries or by the responsible organic associations, as there is still much experimentation. Nor are top wines necessarily to be expected. But that a wine produced under such conditions can be top quality is proven by the famous vineyards Château de Beaucastel and Château Rayas (Rhône) as well as Château La Roche-aux-Moines (Loire) with the cult white wine Coulée-de-Serrant. In the US state of California, the two wineries Fetzer and Mondavi are among the pioneers. But also in Germany, Greece, Croatia, Austria, South Tyrol (Italy), Portugal, Spain, Switzerland and also in other EU countries there are numerous organic farms with excellent wines.

A biological-ecological oriented viticulture of a producer with even the strictest, self-imposed guidelines does not necessarily mean an organic wine (organic wine). Of course, a rustic vinification as with the Orange Wine is not enough (for which there is also no wine law definition). Prerequisites for the declaration as an organic wine are the certification as an organic farm and the observance of the production rules. After years of negotiations, there is an extended EU regulation on organic farming since 2012. Compared to earlier regulations, it contains guidelines not only for vineyard management, but also for cellar-technical measures as well as limit values of certain substances for wines of this protected name.

The production, processing, control and import of organic products are regulated by the EU Organic Regulation. The guidelines contained therein are the basis for certification with annual checks as an "organic farm". This is carried out by state-approved organic or eco-control bodies, which also check compliance with the guidelines on an announced basis, but also carry out random checks without prior notice. Only such certified companies are allowed to produce organic wines (eco-wines), or to label them as such with the organic seal of the EU and, if necessary, additionally with an association seal. However, membership of one of the many organic associations such as DEMETER is not mandatory. There are countless organic associations worldwide and many more organic quality seals. In Austria, for example, more than 100 different organic quality seals are currently in use. Some of these labels are issued by governmental agencies, some by working groups and organic associations, others are special private labels of large supermarket chains such as "AMA" (Agramarkt Austria) or "JA! NATÜRLICH" (REWE Group). The basic prerequisite is compliance with the minimum standards of the EU Organic Regulation in order to be allowed to label the products produced or marketed as "organic".

There are various organic-organic production forms, which are very similar in terms of principles, but differ in detail in terms of philosophy and individual guidelines/measures. In some sources Biodynamic viticulture and Bioenergetic Viticulture are also considered as one system:

All these forms of production include, among other things, plant protection measures of a very similar nature, in some cases to varying degrees, but with the same goal of protecting the environment as far as possible (the four keywords on plant protection contain detailed information in this order):

There are many associations and institutions worldwide with biological/ecological oriented guidelines with similar objectives, but in part with different methods:

More detailed information on this complex subject area can be found under the following keywords, which have already been mentioned several times above: