Fourth stage (also Quatrième Cru Classé) in the context of the Bordeaux classification for red wines of the Médoc in 1855, see there.

The wine-growing area is part of the French region of Bordeaux; the name means "middle land". It is located northwest of the city of Bordeaux on the triangular peninsula between the Gironde estuary formed by the confluence of the Garonne and Dordogne rivers and the Atlantic Ocean. The strip, about 70 kilometres long and 5 to 12 kilometres wide, is dominated by vineyards and interrupted by pastures, scrubland and polders (floodplains). The area is divided into two regional appellations (Bas-Médoc and Haut-Médoc) and six communal appellations within Haut-Medoc, with around 16,000 hectares of vines. Médoc is probably the most famous appellation in the Bordelais and also one of the most important and best red wine regions in France and the world. 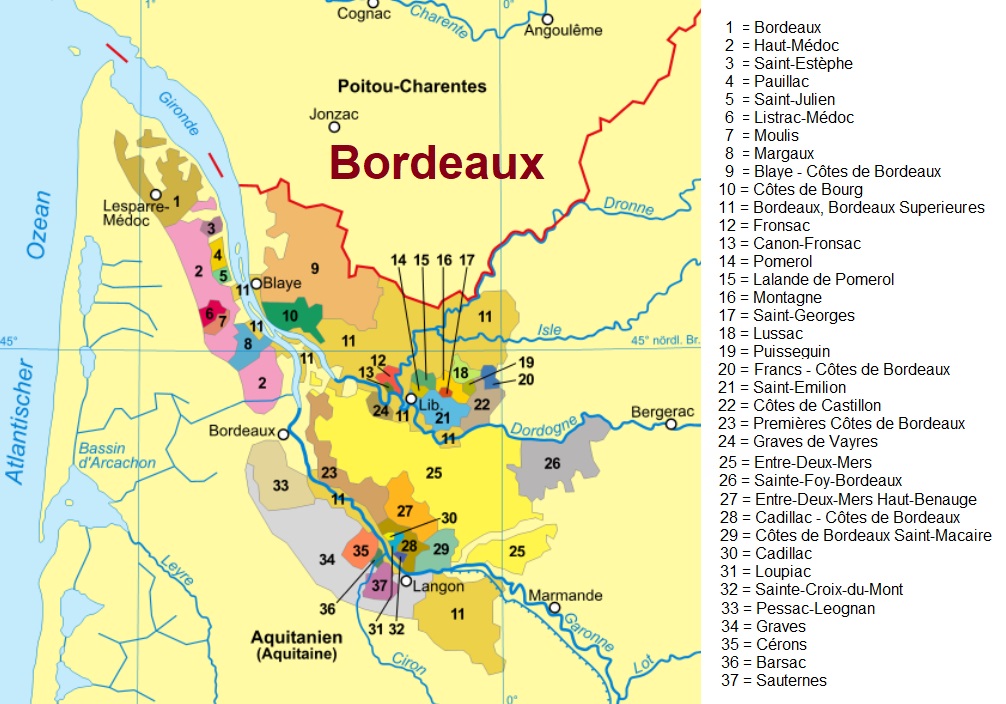 Viticulture came to this area relatively late. In the 17th century, under the guidance of Dutch dam and hydraulic engineering specialists, the coasts were straightened, swampy ground areas drained and streams regulated. This is why the area was called "La Petite Hollande" for a long time. Since there was no viticulture in the area at that time, the Dutch bought wines from the "Bordeaux hinterland", which was known as Haut-Pays and the wines from there as "Vin de Haut" or in Dutch "Hooglansche Wijn". Later, many vineyards were planted or small areas were acquired and combined to form larger estates, including by the famous Ségur family. Médoc has particularly good conditions for winegrowing. These are the mild climate, the very poor and deep gravel soil in many places, which forces the vines to drive their roots deep into the ground, and the good water drainage in the soil. Despite the close proximity to the Atlantic, the climate is not humid, as the many pine forests provide excellent protection against winds and rain from the west.

Médoc is divided into the northern area Bas-Médoc (usually somewhat confusingly referred to as Médoc because it does not refer to the entire area) with 5,600 hectares and the southern area Haut-Médoc with 4,600 hectares of vineyards (the sizes refer to the two appellations without the six communes listed below). The border runs at Saint-Seurin-de-Cadourne, north of the commune of Saint-Estèphe. Haut-Médoc begins at the southern commune corner of Blanquefort, which forms the northern border with the Graves area. Both areas are also entitled to their own appellation. They are distinguished by quite different soil types. In Haut-Médoc, the gravelly soil means that the wines can be classified somewhat higher and have more race and finesse. The six famous communes of Margaux, Moulis, Listrac-Médoc, Pauillac, Saint-Estèphe and Saint-Julien form their own appellations within Haut-Médoc.

The wines from the other communes bear the origin "Haut-Médoc", the wines from Bas-Médoc simply "Médoc" or rarely "Bas-Médoc". They are made from the typical grape varieties in the Bordeaux blend, with Cabernet Sauvignon tending to dominate in Haut-Médoc and Merlot in Bas-Médoc. The grape variety mix differs, however, mainly by whether one is on the rive droite (right bank) or rive gauche (left bank) of the Garonne/Dordogne or Gironde. The less important white wines are mainly made from Sauvignon Blanc. Typical of the Médoc are the numerous magnificent châteaux, which also deserve this designation (as "château") from an architectural point of view. However, this is not a sign of quality, because there are also wineries with very simple buildings where great wines are produced.

In 1855, the famous Bordeaux classification took place (the reason or the process is described there). Out of a total of 4,000 châteaux or red wines, only 61 (that is the number from today's point of view, see then below) were deemed worthy of inclusion. With the sole exception of Château Haut-Brion from the Graves area, only Châteaux from the Médoc are included. The official presentation took place with great pomp on 18 April 1855. The Châteaux were grouped into five classes. Within these five classes, the wines were ranked in descending order based on their average price. Château Lafite-Rothschild was at the top of the list. 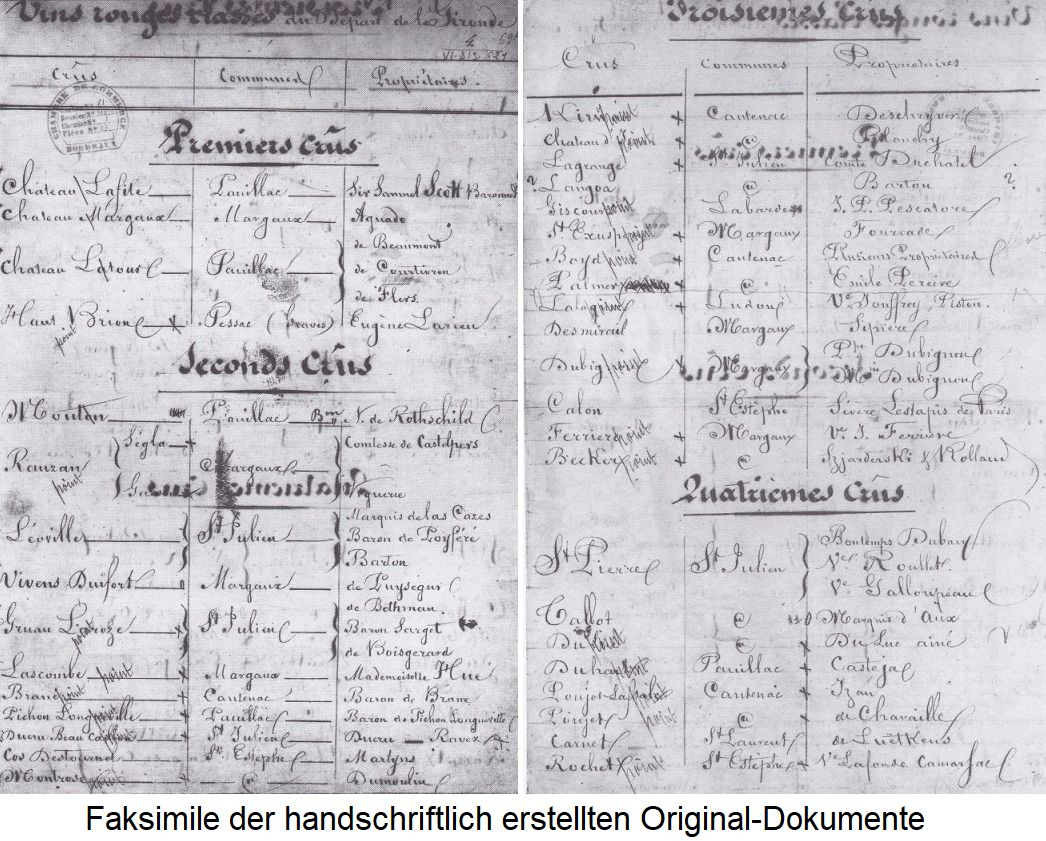 The order of the châteaux at that time is shown in the table below. Today, the class is rather rarely included on the bottle label, but often only the text "Grand Cru Classé en 1855" is given. The lesser-known Deuxièmes, however, very often indicate their status in order to be renowned. Even Baron Philippe de Rothschild did not miss the opportunity in 1973 to document the elevation of Château Mouton-Rothschild to the...