One of the six communes (in addition to Margaux, Moulis, Pauillac, Saint-Estèphe and Saint-Julien) within the French Haut-Médoc area which are own appellations and are allowed to carry the commune name on the bottle label. It covers 640 hectares of vineyards. The name Listrac was added to Médoc in 1986 to avoid confusion with the Lirac area of the Rhône Valley. The area between Margaux and Saint-Julien is a little further back from the Gironde and has heavier soils.

None of the 61 châteaux that were included in the 1855 Bordeaux classification in the Grand Cru list are found here. Nearly 30 estates are classified as Cru Bourgeois and a dozen as Cru Artisan. The red wines in the typical Bordeaux blend (left bank of the Gironde) of Cabernet Sauvignon, Cabernet Franc and Merlot are developing somewhat more rapidly than in other communes. Well-known wineries are Château Clarke, Château Fonréaud, Château Fourcas-Dupré, Château Fourcas-Hosten and Château Peyre-Lebade. 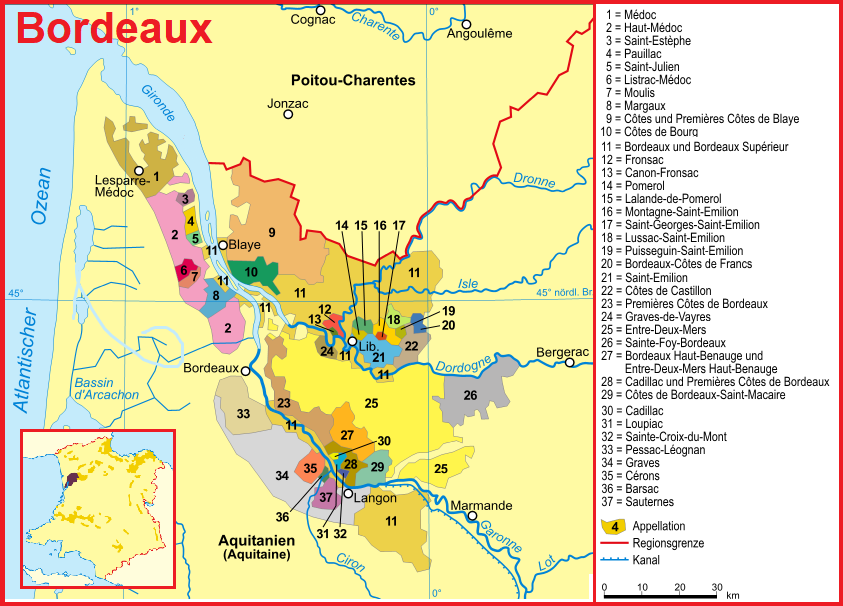 From Domenico-de-ga from Wikipedia, CC BY-SA 3.0, link
Changes from the original by Norbert Tischelmayer 2017

Informations about "Listrac-Médoc AOC" in wein.plus Wine Guide
This page was last modified at 19 December, 2019 at 08:57.