France is a relatively young wine-growing country compared to Greece and Italy. The first vines were brought in the 6th century BC by the Greeks, who founded Massalia (lat. Massillia = Marseille) in the southwest on the Mediterranean coast. At this time, the land that was later called Gaul by the Romans was inhabited by the Celts. A brisk trade developed and the Greeks covered the demand. When they immigrated to the Po Valley in the 5th century, they got to know Italian wine and began to import it. The later French consumed wine for a long time before they started to cultivate it themselves on a large scale. The conquest of Gaul by Julius Caesar (100-44 B.C.) led to its systematic spread. This took place in the 1st century in the Rhône valley, in the 2nd century in Burgundy and Bordeaux and in the 3rd century on the Loire. The Roman emperor Marcus Aurelius Probus (232-282) lifted the ban imposed by Emperor Domitian (51-96) and in the middle of the 3rd century ordered the planting of vines throughout Gaul.

The King of the Franks and later Emperor Charlemagne (742-814) gave decisive impulses for viticulture in present-day France through his decrees. In 1098, the Catholic order of the Cistercians was founded in the Cîteaux monastery in Burgundy, which quickly spread throughout Europe. The monks perfected viticulture in terms of soil type selection, grape variety selection and winemaking, which had an impact throughout Europe. But equally important for viticulture was the order of the Benedictines, whose most famous member was probably Dom Pierre Pérignon (1638-1715), the "inventor" of the assemblage, the artful blending of wines. It is also worth mentioning that wine was included in the French revolutionary calendar, September was given the name Vendèmiaire (wine month).

In 1855, the famous Bordeaux classification took place, which had a great influence on the quality class systems that were subsequently created, but which differ greatly from one region to another (see Grand Cru). Shortly afterwards, the country was the starting point of the greatest and most extensive catastrophe in the history of viticulture, when phylloxera and powdery and downy mildew began their campaign of destruction throughout Europe in the 1860s. France was particularly hard hit, with over three-fifths (700,000 ha) of its vineyards destroyed. At the same time, however, the "Golden Years of Bordeaux" marked a new beginning, when vineyards were planted on a large scale in the Médoc.

In France, it was recognized early on that a wine with unmistakable characteristics is produced on a certain type of soil, under the influence of the local climate (microclimate), certain grape varieties and also the art of the winemaker. The Cistercians already made the beginnings. In the first third of the 20th century the term terroir was coined for it. In the 1920s, Pierre Le Roy de Boiseaumarié (1890-1967), the owner of the winery, described the ideal grape varieties for Châteauneuf-du-Pape on the basis of the soil and climate typical of the area he had defined. Further impulses were provided by the professor of agriculture Joseph Capus (1868-1947), who together with Boiseaumarié is considered the initiator of the appellation system.

Today, French wine is regarded worldwide as something extraordinary and as an expression of cultural perfection. The famous English wine author Hugh Johnson described this very aptly in his book "Atlas of French Wines": "In the course of history, a form of cultural perfection has developed in various places around the world that defies any logical explanation. If one thinks of the Middle East, this is religious fertility, the name Germany is associated with music, the name Italy with architecture. But when one speaks of France, one involuntarily thinks of the pleasures of the table. The French choose and prepare their food with more zeal and care than anyone else in the world. Surely this ingenious talent for enjoyment has helped the French to become the creators of the noblest wines"

With regard to the grape varieties, different philosophies or styles prevail. In the South and Southwest, especially in Bordeaux, red wines in particular are blended from several varieties. These are the classic cuvées, for which the term Bordeaux blend is used. In the more northern regions, on the other hand, such as Chablis, Alsace, Loire, Savoy and especially in Burgundy, the wines are mostly made from a single grape variety. Especially in Burgundy, the vineyard and the classification system associated with it are particularly pronounced. Within the framework of EU grubbing-up programmes, around 180,000 hectares of vineyard area were grubbed up between 1988 and 2010. Languedoc-Roussillon was particularly affected by this.

In 2012, the total area under vines was 792,000 hectares, of which 41.5 million hectolitres of wine were produced. This puts France, together with Spain and Italy, in the top league worldwide (see also under Wine production volumes). this year, there were 68,500 wine-growing enterprises with an average of 9.1 hectares under vines (Champagne 2.4 and Bordeaux 14.4). Around 45% process the grapes themselves and produce 55% of the production, the rest is supplied to winegrowers' cooperatives. The production consists of 45% red wines, 43% white wines (most of which are in brandy) and 12% rosé wines. Around 62% are AOP wines, 18% IGP wines and 20% Vin de France. The 2010 grape variety table (ex Kym Anderson statistics):

The country is administratively divided into 95 départements. The wine-growing areas are fairly evenly distributed over three quarters of the surface. Under the protection and supervision of the INAO, there are around 400 AOP areas (quality wines) and around 100 IGP areas (local wines). In contrast to Italy (where this is 100% identical), there is hardly any correspondence between the wine-growing regions and the political borders: 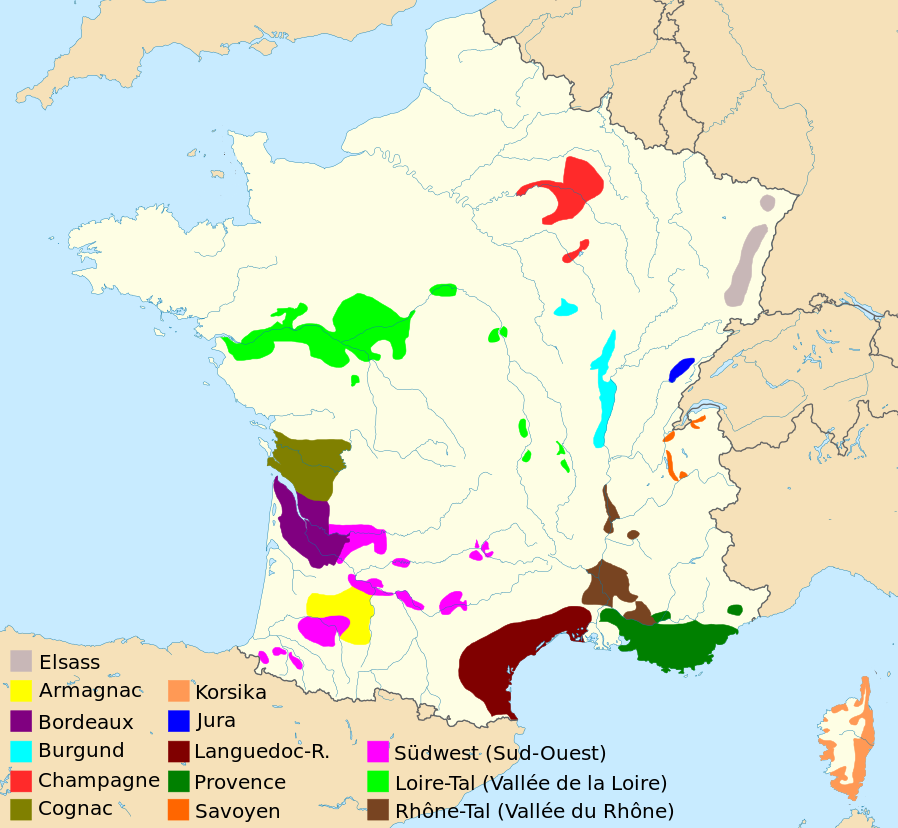 France was the first country to record its wine-growing areas geographically. This was done by defining legally valid areas and boundaries from which the specific quality of a wine can be clearly derived. This is unambiguous and unmistakable by the appellation in question. The better a wine, the more precise the regulations and, as a rule, the smaller the area. The specific system of "controlled origin" is described under Appellation d'Origine Protégée; it is controlled by the INAO authority.

In August 2009, the EU wine market regulation came into force with fundamental changes to wine designations and quality grades. The designation AOC may continue to be used alternatively. These are (see also detailed under quality system):

Vin de France (Vins sans Indication Géographique = wines without geographical indication): replaced the former name Vin de table. Grape varieties from all over France are allowed. There are wines without and with indication of grape varieties and/or vintage. The INAO is not responsible, as is the case with quality wines and country wines, but the Anivin de France association.

IGP (Vins avec Indication Géographique = wines with protected geographical indication): Replaced the former name Vin de pays. The wines are subject to less strict production guidelines. Although recommended grape varieties and maximum yields are defined, there is more freedom than with AOP. Grape varieties other than those recommended may be used. A hierarchical distinction is made according to size or volume in IGP régionales, IGP départementales and IGP de petites zones. The six largest regional IGP areas are Atlantique, Comté Tolosan, Comtés Rhodaniens, Méditerranée, Pays d'Oc and Val de Loire.

VDQS (Vin Délimité de Qualité Supérieure): This level was created in 1949 as a preliminary stage for the AOC rank. The production guidelines must now be prepared according to AOP standards and the link to the terroir must be proven. These wines are thus highly classified as AOP.