Along with Altenberg, Herrenberg, Kapellenberg, Kirchberg, Klosterberg and Rosenberg, the designation is one of the most common single-vineyard designations in Germany. A Sonnenberg occurs a total of 80 times in almost all growing regions, making it by far the most common name. Many other vineyard names contain "sun" as a component. The best possible exposure (sunlight) plays an important role during the vegetation cycle.

The south to south-east facing vineyards with a slope of 20 to 30% cover 24 hectares of vineyards. The soils, which are rich in skeletons in places, consist of loamy sand to clayey loam. Here, mainly the varieties Riesling, Traminer, Muskateller, Müller-Thurgau, Cabernet Dorsa, Pinotin and Frühburgunder are cultivated. The Thüringer Weingut Bad Sulza w inery, for example, has a share in the site.

The south-southwest to northeast facing vineyards with slopes ranging from 0 to 40% cover 150 hectares of vineyards on gypsum keuper and reed sandstone soils. Due to its size, it is a very inhomogeneous site. The Schupen and Steingrüben vineyards, which face south to southeast and are sheltered from the wind, are considered to be high-quality areas. The Dautel vineyard, for example, has a share in the site.

The south-facing vineyards (from which the name derives) with slopes ranging from 10 to 25% cover 78 hectares of vines on deep loess and loess-loam soils. The best parcels are in the middle section. Here, mainly Riesling is cultivated. Shares in the site are held, for example, by the Freiherr Langwerth von Simmern and H. J. Ernst wineries. 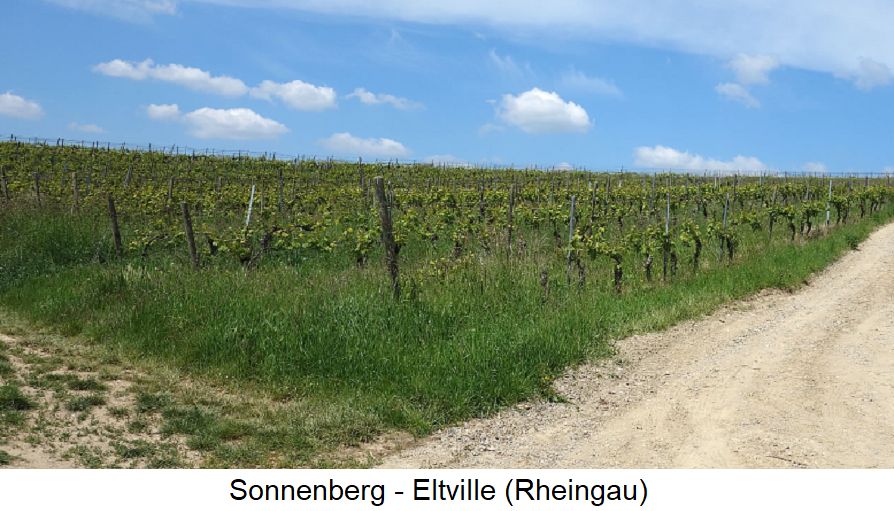 The west-facing flat vineyard covers only 0.4 hectares of vines on loess and sandy loam.Pinot Noir is cultivated here....