Single location in the municipality of Assmannshausen (district of Rüdesheim) in the German Rheingau growing region. The name does not derive from the place of horror, but from the Old High German "Helda" for slag heap or steep slope. It is documented that at least since the year 1470 the varietyPinot Noir was cultivated here. In 1814, on the occasion of his trip to the Rhine, the wine connoisseur and poet Johann Wolfgang von Goethe (1749-1832), who otherwise preferred white wines, praised Höllenberg red wine in the highest tones. 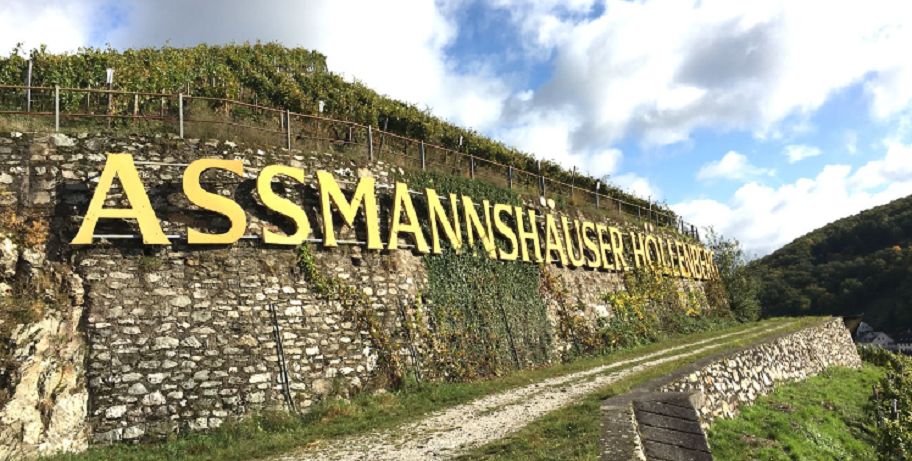 The south- and south-west-facing vineyards at an altitude of 80 to 300 metres above sea level extend from the Rhine to a side valley and cover 46 hectares of vineyards. The site is one of the steepest vineyards in Germany, with a gradient of 30 to 60%. The microclioma is positively influenced by the Rhine. The medium to deep soils consist of violet coloured, leafy layers of weathered Taunusphyllite slate with admixtures of loess loam with a high heat storage capacity. Due to its excellent suitability for red wine,Pinot Noir (Pinot Noir) and also Riesling are cultivated here. Shares in the vineyard are, for example, held by the Allendorf, Chat Sauvage, Dr. Corvers-Kauter, Hessische Staatsweingüter, Johanninger, Kesseler, König Klaus & Ursula, König Robert, Krone, Künstler Gunter, G.H. von Mumm, Ress Balthasar, Schloss Schönborn and Wilhelm Mohr Erben.