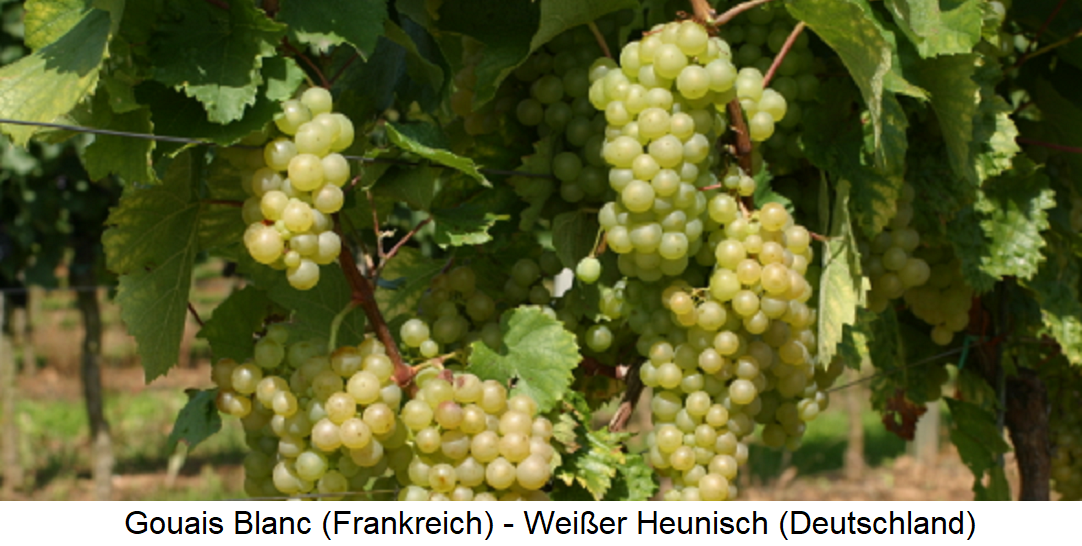 Although it appears to have synonyms or morphological similarities, it should not be confused with the varieties Orléans (Hartheunian) or Ranfol. The numerous grape varieties with the name part "Heunisch" are not all related to each other. Most of them are no longer significant and are only in vines for historical reasons (e.g. Geilweilerhof and Domaine de Vassal). The variety Gouais Blanc (France) is genetically identical to White Heunisch (Germany), although the development of the two varieties has been different.

Many of the synonyms were used in part "crisscross" for several varieties of Heunisch. The German name Heunisch originates from the early Middle Ages and was allegedly first mentioned in the 11th century with "hunisce druben". It is associated with the Huns and that it was brought to Europe by them. However, this hypothesis is difficult to prove. For many centuries the terms "Heunisch" (for "coarse") and "Fränkisch" (for "fine") were the only wine or quality designations and did not refer to a specific variety. A reliable mention was made in 1546 in the famous "Kreütter Buch" by Hieronymus Bock (1498-1554: "The large, fat (thick) Hynische grapes, which are sent by several shitty grapes for the sake of their quick choking". The varieties of the Heunisch group:

There are many hypotheses about the origin of the French name. The most probable assumes a name-giving community, whereby the following are possible: Gouaix (Seine-et-Marne), Gouais-les-Saint-Bris (Yonne), Gouex (Vienne) or Goix (Nièvre). All four départements are located in the central north of France. Therefore, the most likely theory of origin assumes that the variety also originated here and then spread throughout Europe. This was also assumed in 1903 by the ampelographer Adrien Berget, who had been intensively engaged in research into French vines. A second hypothesis derives the name from "gou", a pejorative dialect expression for the simple quality of the wines.

Gouais Blanc or Heunisch is one of the most important leading varieties. The variety has passed on its genes in numerous natural crosses. The ampelographer Thierry Lacombe has identified more than 100 direct descendants in the Domaine de Vassal vineyard in Montpellier through extensive DNA analyses. This has earned the variety the nickname "Casanova of grapes". Around 80 of these have originated on French soil, which also speaks for the French origin. The rest come from Bulgaria, Germany, Georgia, Greece, Moldavia, Austria, Switzerland, Serbia, Slovenia, Czech Republic and Hungary. By far the most common crossbreeding partners were Pinot varieties (Blanc, Gris or Noir), with which more than 30 further offspring were created (see a list under Pinot). Some of the offspring:

The medium ripening, very productive vine is resistant to frost, but susceptible to botrytis. The big grapes and juicy berries made it very popular as an eating grape. Because of its digestive and laxative effects, it was called "Bettschisser", "Laxiertraube" or "Scheißtraube". It produces simple, acid accentuated white wines with aromas of green apples and pears. The famous mystic Hildegard von Bingen (1098-1179) already wrote in the 12th century "that the Franconian and strong wine makes the blood boil and therefore has to be mixed with water, whereas this is not necessary with the Hunnish and naturally watery wine". The vine, which is highly valued for its richness of yield, reliably filled the barrels and is therefore considered a "historical mass carrier".

The hypothesis that Emperor Probus (232-282) had it planted in Dalmatia and it spread from there is unlikely due to the lack of descendants in Croatia. Other hypotheses assume an origin in Eastern Europe(Hungary) or Georgia or Caucasus. The variety was already widespread in the early Middle Ages under countless names. Its occurrence is documented from east to west in the Czech Republic (Bohemia, Moravia), Hungary, Slovenia, Croatia, Austria (then Habsburg Empire), Italy (South Tyrol), Switzerland (where it was mentioned in Valais as early as 1540 under the name "Gewess"), Germany and France (especially in the northeast). There it was often cultivated together with Pinot and Traminer (Savagnin Blanc). This is also the reason for the numerous descendants of these varieties. Due to the poor quality of the wine, Gouais Blanc and Elbling were later extensively cleared and replaced by Franconian varieties.

An extraordinary find in 2003 caused a great stir in expert circles. The two biologists Andreas Jung and Dr. Erika Dettweiler (Maul) from the Institute Geilweilerhof (Palatinate) discovered four historical to 400-year-old vineyards in the communities of Handschuhsheim, Dossenheim, Rohrbach and Leimen (Baden) with a wealth of grape varieties that have become extremely rare. Among them was the white Heunisch in the Leimen Gewann "Schrecken". The Georg Breuer winery in the Rheingau has planted this variety in small quantities and presses a wine from it. There are other small stocks in France (Savoy), in Switzerland with the water pressed from it, and in Italy (Piedmont) under the names Liseiret and Preveiral. In Austria there are a few vines in the vine museum of Franz Leth (Wagram, Lower Austria).