A spirit drink with a characteristic green colour using the mugwort plant Artemisia absinthum, which is also used for wormwood. First mentions of an absinthe-like drink come from ancient Greece. Pythagoras (570 to 510 B.C.) and Hippocrates (460 to 377 B.C.) reported on its healing power, its effect as an aphrodisiac and the increase in creativity they experienced through the drink. The original recipe for absinthe did not originally contain aniseed. It actually had a medicinal, invigorating effect on the eye and was made from wormwood oil, sage oil, balm, violet root oil, cinnamon, some secret ingredients and chlorophyll extract (hence "the green fairy"). It was Henri-Louis Pernod (1776-1851) who first added aniseed after buying the recipe at the end of the 18th century and setting up production first in Switzerland and then in France. After the ban on absinthe at the beginning of the 20th century Pernod had to change the recipe; the spirit now no longer contained absinthe. 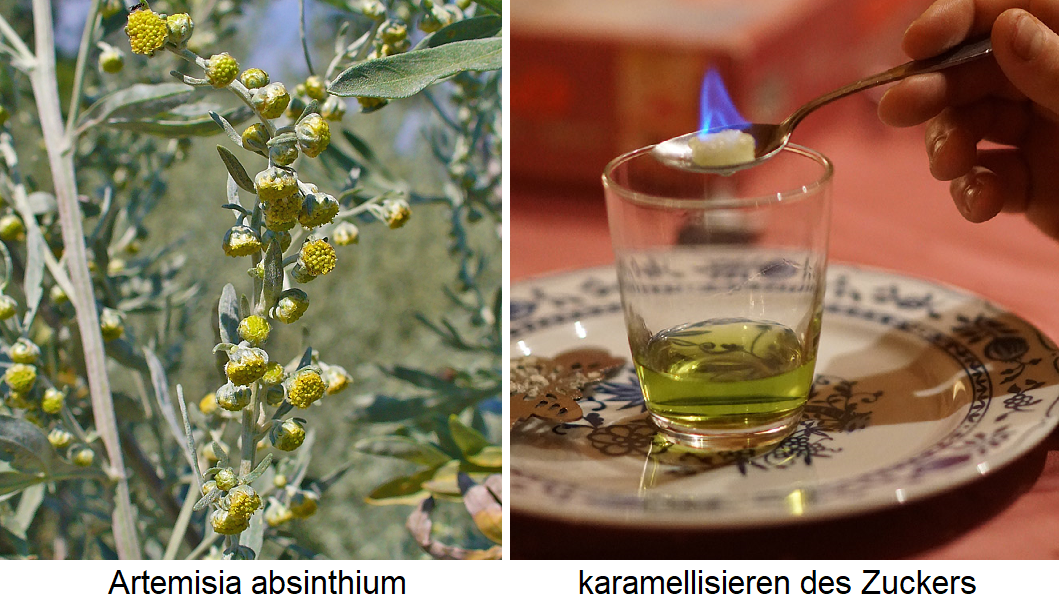 In the 18th and 19th century Absinthe schnapps, especially Pernod, which at that time still contained Absinthe, was very popular under the name "Fée verte" (Green Fairy). Especially in artist circles (painters, writers, actors) it became a true cult drink. Among them were Charles Baudelaire, Paul Gauguin, Vincent van Gogh, Ernest Hemingway, Guy Maupassant, Pablo Picasso, Edgar Allan Poe, Jean-Arthur Rimbaud, Henri Toulouse-Lautrec and Oscar Wilde. The painter Vincent van Gogh (1853-1890) allegedly cut off his ear while intoxicated by absinthe. At the beginning of the 20th century it was proven that absinthe contains the nerve poison thujone, which is harmful to health in large quantities. The production was therefore banned in France in 1915 and in Germany in 1923, as well as in most European countries and in the USA.

Some people attributed certain symptoms to the chronic Absinthe consumption, today we know that these were rather caused by the alcohol. The symptoms of so-called "absinthism" are in fact identical to those of alcoholism. For the production of absinthe in the 19th century, often inferior alcohol was used, which contained methanol and fusel oils. Analyses of Absinthe samples from the time before the ban were carried out in 2008 revealed concentrations of only an average of 25 mg/l. At these values a psychotropic effect is extremely unlikely. Since 1988 Absinthe has been permitted again in the EU countries. The permissible thujone content in alcoholic beverages is limited to a maximum of 35 milligrams per liter. Absinthe produced according to the old original recipe of the Pernod Ricard company has an alcohol content of 68% vol. Just like in former times it developed again to a cult drink.

Similar to other aniseed spirits such as ouzo, absinthe is mixed with water (ice water) in a ratio between 1:1 and 1:5, which makes the liquid milky and opaque(Louche-effect). Special drinking rituals have developed around this cult drink. There is, among others, a French, a Swiss and a Czech variant. The latter is also called fire ritual because one or two sugar cubes soaked with absinthe are placed on an absinthe spoon and lit (see picture above). As soon as the sugar caramelizes and blisters, the flames are extinguished and the sugar is added to the Absinthe, which causes the typical taste.