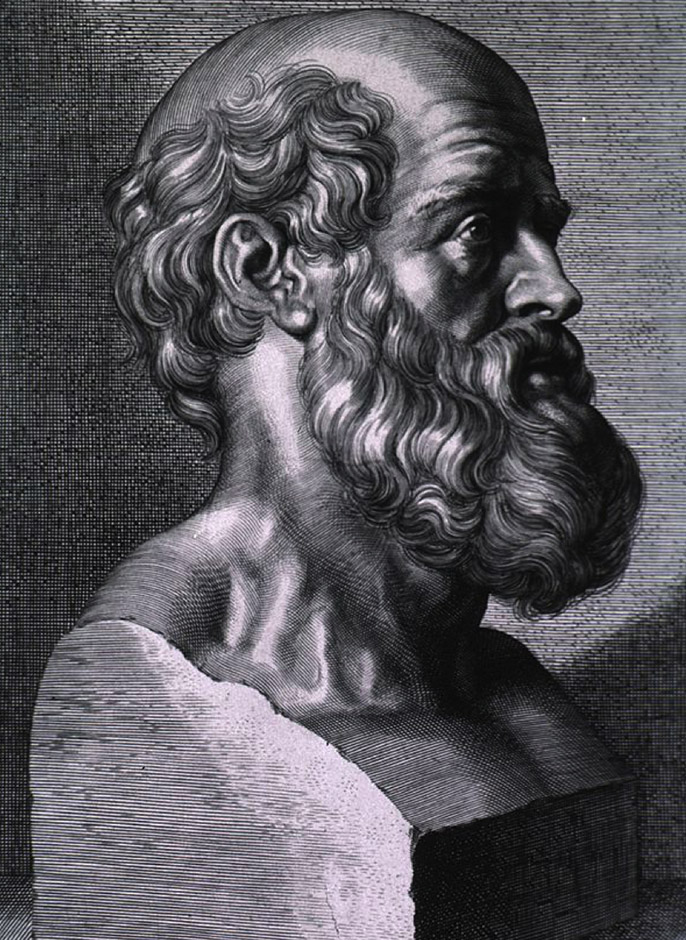 The Greek physician Hippocrates (460-377 B.C.) was born on the island of Kos in the Eastern Aegean and is referred to as the father of medicine. The "Hippocratic Oath" still defines the moral and ethical duties of the doctor today. Wine plays an important role in almost all the medicines he handed down. In his work "Corpus Hippocraticum" the health aspects of wine consumption are pointed out in the form of therapeutic recommendations using numerous examples. Among other things, he prescribed wine to cool down fever, as a general germicide, as a diuretic and as a strengthening for convalescents. Hippocrates gave detailed information and recommended certain wines according to the suffering or even advised against drinking them at all.

He also had very specific ideas about how wine should be drunk, namely neither too cold nor too warm. Prolonged consumption of warm wine, he claimed, led to feeble-mindedness, while excessive consumption of cold wine led to convulsions, cramps, burning, chills and fever. It was above all the Roman commander Julius Caesar (100-44 BC) who subsequently used these findings in his many campaigns. His legionaries received a daily ration of wine to prevent intestinal diseases. Hippocrates recognized the chemical processes in the human body in connection with wine:

"Wine is a thing, wonderfully suitable for human beings, provided that the drink is used sensibly and in the right measure, in good and bad health, in accordance with the physical condition of the individual person. Mild, dark wines are moister, have a flatulent effect and go better with stool. Astringent white wines heat without drying out, and they pass better with urine than with stool. New wines come off better with stool than others because they are closer to the must and therefore more nourishing. Must causes winds, stirs up the intestines and drains them. Sweet, partially fermented wine causes less heaviness in the head than vinoser (more heavily fermented with a higher alcohol content), it goes less to the brain, drains the bowels more than the latter, but makes the spleen and liver swell. However, if there is a suspicion that the head is too heavy or that the brain is being affected, then wine is not recommended.

The "sleeve of Hippocrates", a filtering bag commonly used until the Middle Ages, and the spiced wine Hypocras are named after the doctor. In the second century A.D., a true Hippocratic Renaissance took place, to which the Greek physician Galenos of Pergamon (129-216) contributed.