Colloquial name (without meaning in wine law) for wines with a certain flavour or a wine style with characteristic, unmistakable typicity. In the course of globalisation, they are becoming more and more important. Characteristic is a taste profile that is independent of the vintage and almost always the same, which is conceived and produced exactly according to consumer wishes. It is therefore not unusual for branded wines to be among the Coca-Cola wines (McDonald's wines) much criticised by wine connoisseurs. However, this by no means means means a priori a lower quality of the product, but mostly they are not absolute top wines, as these products have to be in the lower price segment to reach the masses. Often both the origin and the grape variety take a back seat, although the latter can also mean a certain brand definition. 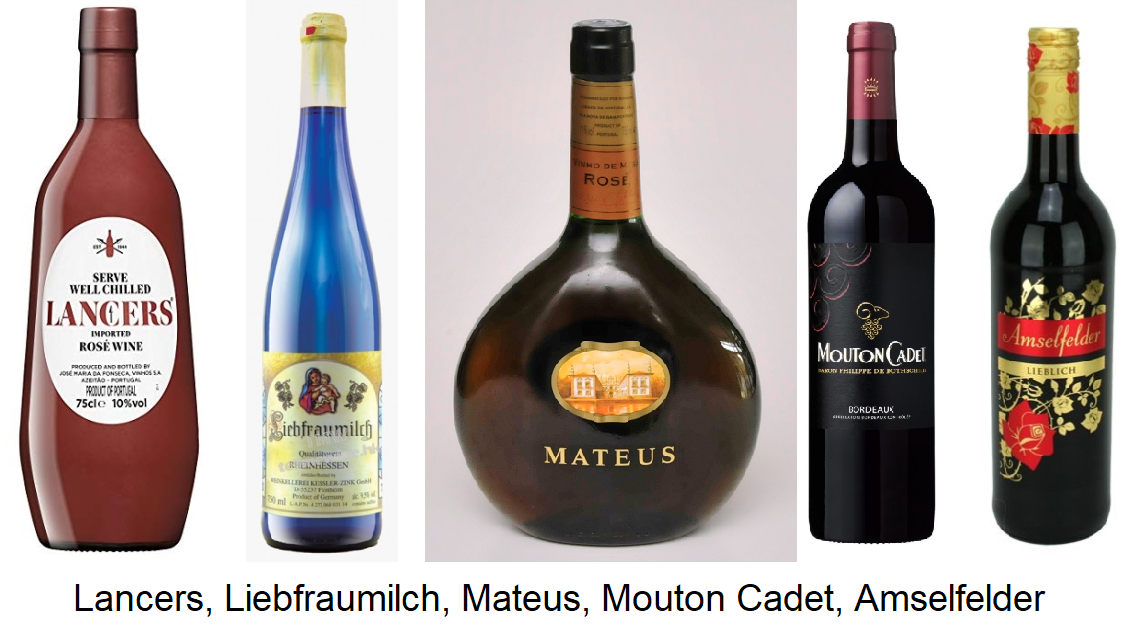 This is often intended to address new groups of buyers in non-traditional wine-growing countries who cannot (yet) be described as wine connoisseurs. Therefore the recognition value by name plays an important role. Another important criterion is a large annual production volume, often in the millions. Among the most successful European brand wines are Lancers and Mateus (Portugal), J. P. Chenet from Grands Chais de France, Dourthe No. 1 from Dourthe-Kressmann and Mouton Cadet from the Rothschild company La Baronnie (all France), Demestica from the Riesenkellerei Achaia Clauss (Greece), and the most successful German brand wine Black Tower from the Reh Kendermann winery.

Some origin-related wines have, so to speak, achieved the status of branded wines. These include Amselfelder from Kosovo, Chianti and Kalterersee from Italy, Liebfrauenmilch from Germany produced under various brand names such as "Black Tower", "Blue Nun" and "Madonna", Lutomer from Slovenia, which used to be immensely popular in Great Britain, and Rioja from Spain. Strictly speaking, however, this actually contradicts the above definition, because with thousands of producers of Chianti or Rioja the range of quality is very wide, so that one can by no means speak of a uniform and always the same taste profile. As a rule, a particular brand of wine comes from a single producer. From the 1980s onwards, there was a big boom in the Chardonnay grape variety worldwide (see also ABC). This name became so popular and made such an impact on consumer awareness that the variety became a kind of brand, regardless of its origin or the producer himself.

In the USA there are traditionally many branded wines produced in large quantities. Most of them are produced by large producers such as Bronco Wine Company with e.g. "Charles Shaw", Constellation Brands, Gallo with e.g. "Turning Leaf" and Woodbridge. The five most successful US wine brands operate under the name GAMIT. Among the most successful Australian brand wines are "Yellow Tail" (Casella Wines) and "Jacob's Creek" produced by Orlando. Almost half a billion bottles of the Chinese "Noble Dragon" from the wine multinational Yantai Changyu have been sold to date. Blanchet von Rotkäppchen-Mumm is one of the most successful German brand wines. See also under Critters, area brand, largest wine companies in the world and wine trade.