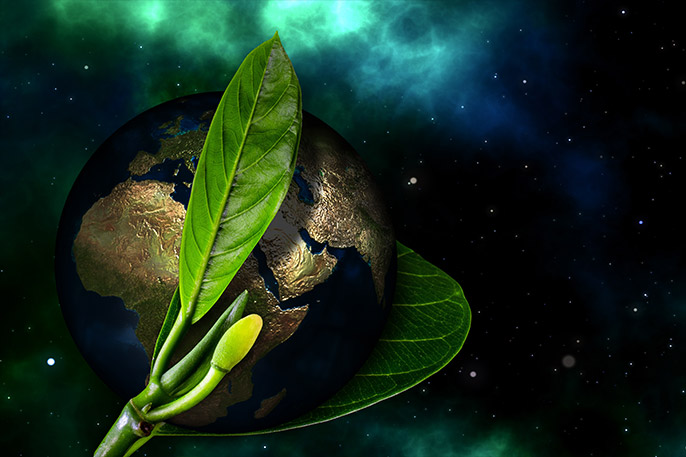 Production form for the production of grapes and wine (principles and general information are described under Organic Viticulture, the study of which is also recommended as an introduction to the complex subject matter). Bioenergetics is a branch of biology, ecology, biophysics and biochemistry that deals with energy conversions in living structures. In a narrower sense, it is the science of energy supply and the energy balance of living cells.

The basis of bioenergetics are the laws of chemistry and physics, especially thermodynamics. Most life processes on Earth are based on photosynthesis and the use of sunlight as an energy source. In all cellular energy conversions, heat is produced as a waste product. The universal form of rapidly releasable energy in living cells and regulator for biochemical processes is ATP (Adenosine Triphosphate). All these aspects are scientifically proven. In addition, however, there are also bioenergetic concepts in the scientific fringe area within esotericism.

In 2005, Franconian winegrowers founded an association for the promotion of bioenergetic viticulture based on the "Codex naturalis Schätzlein" with headquarters in Eibelstadt (Franconia). It should be noted that not all principles or procedures correspond to scientific criteria and some are not undisputed. Bioenergetic viticulture is understood to be the use of natural bioenergy, whereby the energies available in nature are assumed. Reference is made to Hildegard von Bingen (1098-1179), who described the use of energies from minerals and precious stones, among other things. Wine is understood as the oldest cultural asset of mankind, which must be produced in harmony with nature. Production is based on ecological principles, supplemented or strengthened by specific bioenergy criteria.

The influence of light and vibrations (e.g. music waves) is specifically used in viticulture for the BioBalance. In the vineyard any stress for vines and grapes must be avoided. Stringent use of machinery in relation to the vine and soil is strictly avoided. Manual work is therefore a clear principle, especially during the grape harvest. Not permitted are methods of aromatisation, additives and deliberate toleration of the absorption of foreign substances (wood, concrete), genetic engineering methods, and methods that alter the identity of the wine by interfering with its molecular structure. No bacteria, enzymes or yeasts may be added. The person or winegrower must also be in harmony with himself and his environment (especially his family), because only those who themselves "vibrate harmoniously" can also convey BioBalance (end of quote).

However, it should be noted that "harmony of vibration" and "BioBalance" are not scientifically recognised terms. Furthermore, a wine produced according to these guidelines is not automatically an organic wine (organic wine). Prerequisites for this are certification as an organic farm, as well as compliance with the rules and limits for organic-organic wine production. After years of negotiations between the member states, an EU regulation has been in place since 2012 with precise rules for vineyards and, in contrast to earlier regulations, now also for cellars for the vinification of wines with this protected designation.

Measures of biological or integrated plant protection are applied in a very strict form. The Bioenergetic Viticulture is also understood as a further development of the similarly oriented, but due to individual methods (e.g. moon phases and planetary positions) also not undisputed Biodynamic viticulture. However, both forms of production are quite often combined and regarded as a unit. The third (second) scientifically uncontroversial production form is organic viticulture.