The process was allegedly "invented" by chance in France. Wine producers near the sea used (also) barrels of herring from fishermen and tried to eliminate the unwanted fish smell in the wood by brushing or planing it out. When this did not lead to a satisfactory result, the barrels were burnt out inside. Today, this is understood to mean the roasting or cask-burning of the inner wall of barrique barrels. As a rule, the two barrel bottoms are usually not toasted, as this is very time-consuming. However, this is also dependent on the barrique manufacturer or the wishes of the customer (winemaker).

Roasting can be done in a variety of ways, for example, over an open oak fire, with a gas burner or, more recently, with infrared heat. A heat of 200 to 250 °Celsius is achieved. The time fdaaer and the intensity of the fire determined the degree of toasting: 10 to 15 minutes for wines, 15 to 20 minutes for spirits(cognac, rum, whisky etc.). A very strong toasting causes charring and is therefore called charring. The wood is modified to a depth of two millimetres (slightly) to four millimetres (strongly). After toasting, the barrique barrel is brought into its final shape. To soften the smoky taste, it is filled with water. The water, which is emptied after some time, is completely yellow. 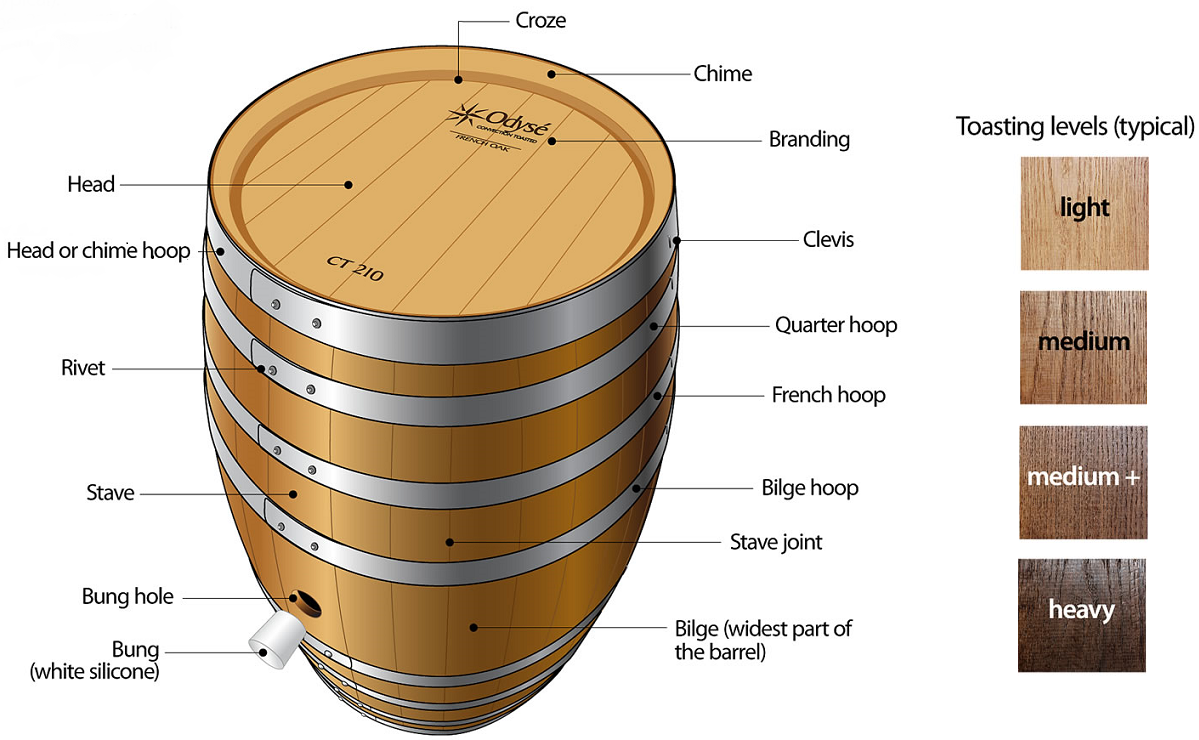 The toasted barrique barrels lend the wine additional aromas when maturing in barriques. The weaker the degree of toasting, the more ingredients are transferred from the oak into the wine. Such wines taste "wood-laden". In contrast, wines from strongly toasted barrels taste more like toast and spices. Individual substances are partly formed only through toasting. One of them is phenolaldehyde vanillin, which is produced by the breakdown of lignin. Depending on the degree of toasting, certain substances are proportionately increased or reduced. For example, the lactones (coconut aroma) are more likely to be reduced with stronger toasting. In any case, this gives the wine a more or less pronounced, unmistakable toast aroma (wood tone). Heavily toasted barrels can also give a smoky note. A negative aspect of toasting - especially with medium toasting - is the increase in the content of acetic acid (mainly acetic acid ester) in the wood. There are the following degrees of toasting (see also the picture above):

In the past, toasting was mainly or almost exclusively used for barrique barrels (225 to 500 litres). In recent years there has been a renaissance of the large wooden barrel. In connection with this, toasting is also offered for large storage casks. Especially for red wines, the volumes of 1,200(piece) and 2,400 litres (double piece) are almost exclusively used with toasting. Due to the significantly larger volume in relation to the surface, toasted large wooden barrels are also suitable for the ageing of certain white wines. In contrast to the classic barrique barrels, which are (have to) be disposed of after three times of use, the large wooden barrels are used for economic reasons.

Complete lists of the numerous vinification measures or cellar techniques, as well as the various types of wine, sparkling wine and distillate regulated by wine law are included under the heading "Vinification". Comprehensive information on wine law can be found under the keyword wine law.