Term for a branch of molecular biology for the study of the structure of the genome (the entirety of the genetic material in an organism) and the function and interaction of genes (the genetic factors located in the chromosomes of each cell nucleus on the DNA strand). Genetic engineering or Genetic engineering is the application of genetic methods in practice and usually means artificial genetic manipulation with the aim of introducing desired, previously non-existent characteristics such as resistance to fungal diseases into an existing organism by the technically feasible implantation of individual replicated foreign genes from foreign organisms into the genome of a variety or breed.

Since the invention of the PCR method (Polymerase Chain Reaction) in the 1990s for the amplification of minute amounts of DNA, grapevine varieties can now also be uniquely characterised, defined and recognised genotypically as varieties using molecular genetic characterisation methods. This introduced the genotype into ampelography, which, as a supplement to traditional, visually phenotype-based ampelography, can help clarify many unresolved questions. Each independent grape variety germinated from a seed is represented by a distinctive genotype, which is characterized by the unique recombination of maternal and paternal genetic material during fertilization and is present in the nucleus of each plant cell. Each grape variety resulting from sexual reproduction has an individual genetic pattern that distinguishes it from all other grape varieties.

For genotypical comparisons or the identification of grape varieties and the determination of the parental couple, the so-called genetic fingerprint is used, which can be created with a microsatellite analysis. The microsatellites are retrievable areas within the long DNA chain defined by molecular markers, which have a varying number of repeating base sequences. These double-repeating sequences for a given double set of vine chromosomes (2n = 38) can vary in length between two homologous chromosomes as well as from one vine variety to another. These sequences can be copied and multiplied as single fragments, so that a specific characteristic is obtained by the length of these genome fragments.

Many such fragments, which are always present in pairs from several gene varieties, result in a fragment pattern which is typical of the variety and which characterises this variety and which can be compared with the fragment patterns of other grape varieties. This fragment pattern is a genetic fingerprint, so to speak. The probability that two grape varieties have the same pattern is statistically about 1:6 million, with only about 14,000 existing grape varieties and breeding lines a negligible probability. Within the European vine breeding institutions there is an agreement that for the genotypic characterisation of grapevine varieties it is therefore sufficient to determine the genotype at six defined gene locations (microsatellites) in order to clearly define the profile of a variety.

Before the method of microsatellite analysis, variety comparisons and variety differentiations were only possible by means of the comparative morphology (external shape) of the vine. One described the variety-typical characteristics and tried to filter out characteristics that allowed the varieties to be identified and delimited. These morphological catalogues of characteristics describe the phenotype of the vine variety. Both approaches have advantages and disadvantages, but complement each other wonderfully. Genetic analyses in the laboratory require only a small amount of genetic material as starting material, the investigations do not depend on external conditions such as season, plant age, health status, virus status or growth conditions at the location, which can disfigure the phenotype (the exterior) beyond recognition.

Laboratory tests cannot simply be carried out blindly on thousands of vines in the field, as can be done quickly and at no extra cost with the trained eye of the ampelograph. Also, varieties that have emerged as mutant clones or somatic chimeras from vegetative propagation can still be better distinguished phenotypically. This is because the colour mutants of Pinot Noir, namely Pinot Gris and Pinot Blanc, are strictly speaking not separate but different berry skin colour variants of the same grape variety. This is a specific mutation process that leads to the loss of the dark colour. Somatic chimeras such as Pinot Meunier (black Riesling) or Garnacha Peluda can be visually differentiated from the original Pinot Noir or Garnacha Tinta varieties much more easily and quickly by the strong leaf hairiness than by elaborate genetic analyses. 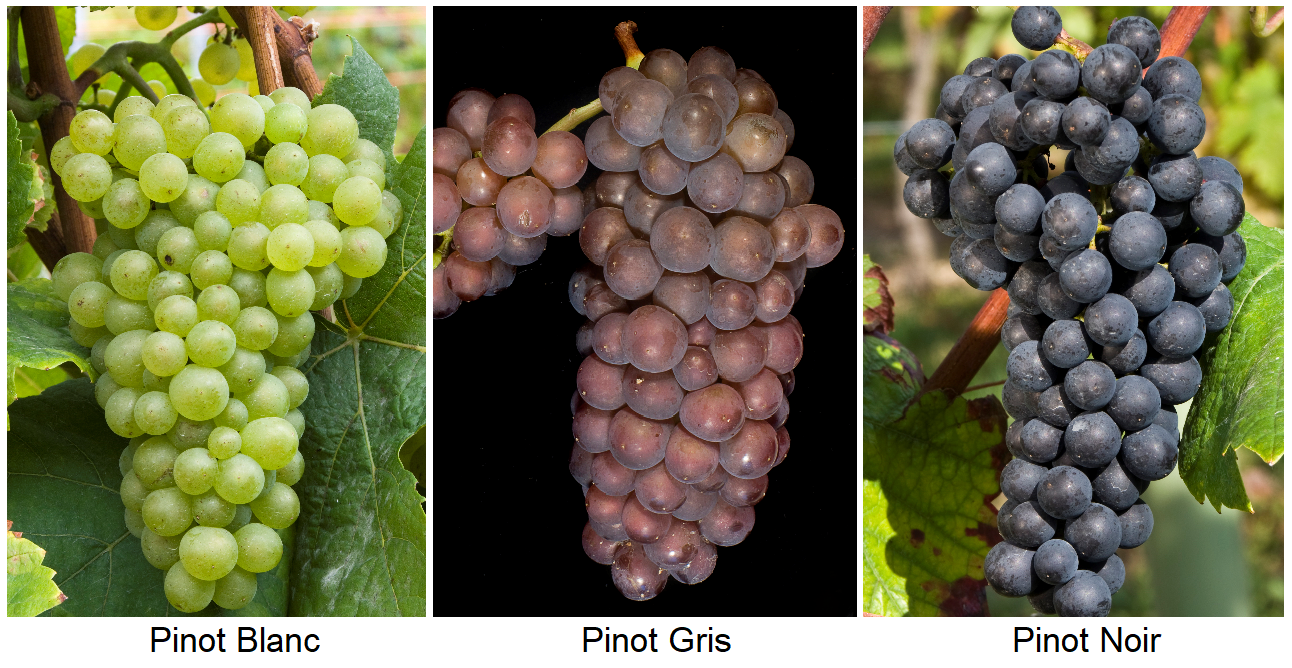 Experience has shown that these six defined markers are sufficient for characterization by microsatellite analysis. For the elucidation of relationships or even the differentiation of clones and somatic chimeras within a variety, considerably more markers must be used. However, there is the rare exception that two externally different phenotypes (varieties) have the same genotypic profile on six markers. This can happen when a somatic chimera has branched off from a grape variety through mutations in special cell layers. Even varieties that have been created by self or back-crossing (mother with child) can still be very similar. Especially in sibling varieties with the same parents this can sometimes lead to failure in the purely visual identification attempt.

Since the mid-1990s, the genetic characterisation of grapevine varieties has been the focus of research. As a basis for comparison purposes, the fingerprints of several thousand varieties of the world's largest grape variety were analysed at the Domaine de Vassal near Montpellier. A central European vine variety database is currently being set up (see also VIVC). In recent years, the parentage of hundreds of grape varieties has been established or, in many cases, corrected in relation to the information that is quite often incorrectly provided by breeders. Important ampelographs in DNA analysis are Dr. Jean-Michel Boursiquot, Thierry Lacombe (France), Javier Ibáñez (Spain), Dr. Erika Maul (Germany), Dr. Carole P. Meredith (USA), Dr. Ferdinand Regner (Austria), Anna Schneider (Italy) and Dr. José F. Vouillamoz (Switzerland).

The DNA analysis of the chloroplasts can also be used to check the crossing direction (mother and father), because these special organ cells are only passed on by the mother variety. In 1997, Meredith and Bowers at the University of California succeeded for the first time in determining the parentage of a grape variety: Cabernet Sauvignon was created from Cabernet Franc (mother) x Sauvignon Blanc (father). Subsequently, some important Central European leading varieties such as Gouais Blanc (White Heunisch), Pinot and Savagnin(Traminer) could be identified. The high age and wide distribution of these varieties favoured the spontaneous cross-breeding and thus the emergence of many other grape varieties. Gouais Blanc/Heunisch, which was cultivated throughout Central Europe in the Middle Ages, has been cross-bred in 80 grape varieties alone.

As in paternity testing, genetic fingerprints can now be used to reconstruct ancestries, determine relationships or identify crosses between hybrids. A prerequisite, however, is an extensive analysis of genetic material at at least 15 up to 50 gene locations (markers). The Swiss biologist Dr. José Vouillamoz believes that there should even be at least 30 to 60 (35 when Cabernet Sauvignon was identified). Only if the potential parents are known, for example through information from the breeder, will fewer be enough. Since each child inherits one chromosome from the father and one from the mother, each grape variety at a specific gene location must also have one characteristic in common with the father variety and the other with the mother variety. This rule applies strictly, which means that failure to meet the parentage criterion usually means the end of the parentage hypothesis. The more gene loci that are included in the study, the more reliable it is. However, 100% proof cannot be provided, since the hypothesis can only be tested positively at some selected gene locations, but never at all.

If one of the parents cannot be identified because its DNA values have not yet been recorded and are not known, or because the variety may already be extinct), it is still possible to demonstrate the relationship between parent plants and offspring of two different varieties. The term "not directly related" is often used in sources. This usually means that there is no parent-offspring relationship, i.e. no "mother-father-child relationship", between the varieties under consideration. Direct relationships between grape varieties (i.e. "mother-father-child") can be clearly reconstructed with the genetic fingerprint. However, even in the case of siblings or "more distant relatives" such as "aunts", "uncles" or "cousins", the relationship is hardly obvious from the genetic profiles.

For some time now, manipulative genetic engineering has also been used in the breeding of modern grape varieties with above all certain resistance properties. In this regard, the international project IGGP (International Grape Genome Program) was launched. In tissue culture suspensions, foreign resistance genes with desired properties can be introduced into the genome of plant cells of certain conventional varieties. These include resistance to fungal diseases and viruses or to animal pests such as the dreaded phylloxera. From the genetically manipulated cells it is possible to regenerate vine plants again, which this time are not new varieties but have essentially retained the genetic characteristics of the selected variety, but supplemented by the "improving" introduced foreign genes.

In practice, however, the hoped-for effects did not materialise in most cases or were not satisfactory. In woody plants, it is apparently not enough to simply introduce individual genes somewhere in the genome and hope that complex and environmentally dependent characteristics such as fungal resistance will develop. The extent to which this technology will lead to the success and practical application of the vine in terms of effort and costs cannot be predicted at present, and there is no demand for it. In any case, the introduction of genetically manipulated grape variety clones would lead to a further impoverishment of varieties and to a further reduction in the number of clones. Whether these artificially manipulated grapevine plants, whose genetic balance is disturbed, will prove to be stable over a long period of time in the case of mass vegetative propagation, cannot be seriously answered today.

DNA analyses in wine are used today with great success to detect wine adulterations (pancakes). In 2002, researchers from the INRA Institute in Montpellier developed a method for DNA isolation from wine and must, which can be used to distinguish between pure quality wine and cheaper blends. The method has progressed so far that, in the case of unfiltered wine, it is possible to determine from the fingerprint typical of the variety whether a wine from the specified grape variety has been pressed pure or whether must from other grape varieties has been added. A quantitative determination of the proportions of the different varieties in the wine is not (yet) possible, but it is possible to determine which varieties are present in the wine.

To date, the INRA team has identified the genetic profiles of 600 grape variety wines. However, the method does not yet work for bottled wines because a large part of the DNA (DNA) is filtered out during the filtering process and the residual concentration of remaining DNA in the finished wine is too low for genetic analysis. However, intensive research is continuing. Using the PNA-FISH method, microbiologically based wine defects such as horse sweat can be detected. See also under the keywords Nuclear Magnetic Resonance and Certification of vines.