In Germany, colloquial term for drunkenness; see under intoxication.

Term for an emotional state of exaggerated ecstasy or an intense feeling of happiness that lifts someone above their normal emotional state. Such a state is caused by psychotropic substances, among other things. These are active substances that influence the human psyche. Depending on the substance, this is associated with disturbances of consciousness, cognitive abilities, perception, affect and behaviour. As a consequence, intoxication is treated by drinking alcohol. When consumed in excess, alcohol causes disinhibition, increased emotionality, inhibition of thinking, stupefaction and overestimation of oneself. In early advanced civilisations, excessive drinking to the point of drunkenness was a ritualised custom on certain occasions. Until the Middle Ages, excessive intoxication was considered normal. From the 16th century onwards it was outlawed and from the 19th century onwards it was increasingly regarded as a disease (alcoholism).

The state of intoxication is a state of excitement or stupor lasting minutes to hours, which is usually accompanied by misjudgement of the situation in the form of sensory illusions and always leaves behind complete or partial amnesia (loss of memory). In alcohol intoxication, there is initially mental disinhibition, increased urge to speak and move with frequent transition to depression and aggression, which can increase to destructive rage. After the intoxication has subsided, there are often after-effects of intoxication known as hangovers. Alcohol consumption leads in stages of well-being and feelings of happiness in extreme cases to drunkenness and can end lethally. Stages of development in parts per thousand:

The temperance societies that emerged in the 19th century tried to draw attention to the dangers of alcohol consumption, in some cases by means of depictions. The related cartoon "The development of a drunkard - from the first glass to the grave" dates from 1846: 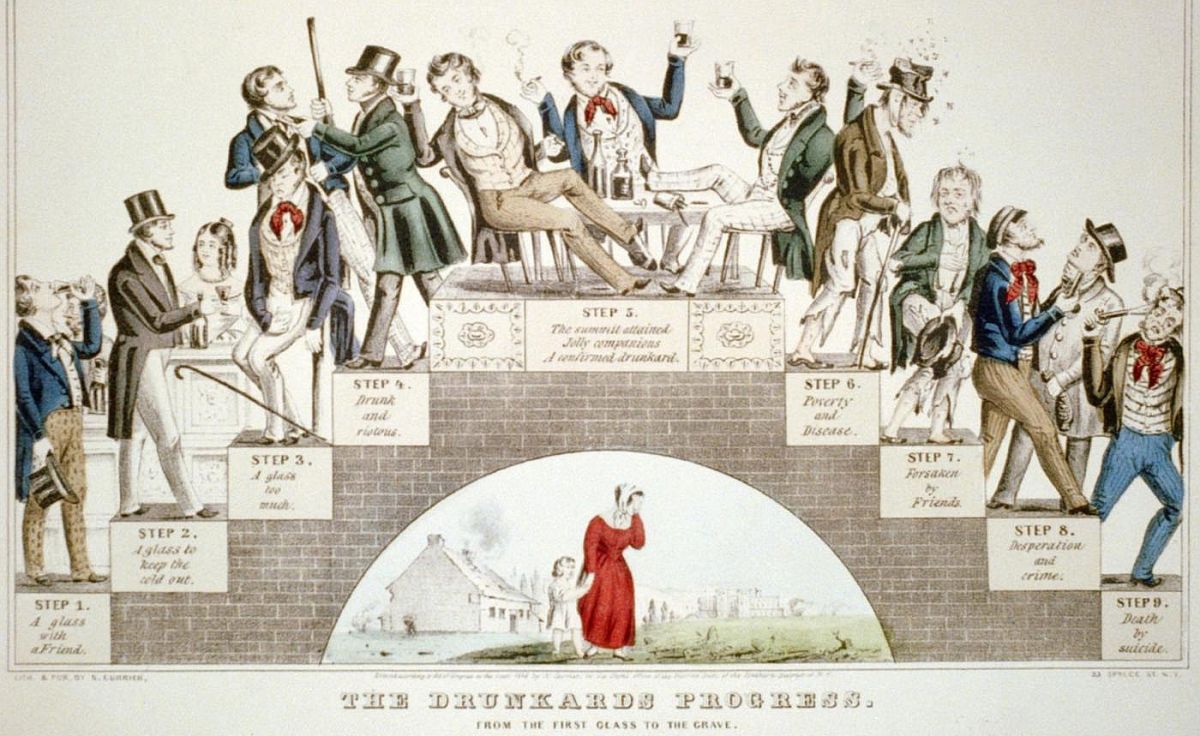 The tolerance of alcohol, i.e. the amount of alcohol that causes intoxication, depends on age, physical constitution, sex, type of person and drinking speed. Women and especially East Asians, indigenous peoples of America (Native Americans) and Australia (Aborigines) have less ADH (alcohol dehydrogenases), ALDH (aldehyde dehydrogenase) and also other degradation enzymes and are thus drunk faster and longer. A completely different criterion is the amount of alcohol that is tolerable or harmless to health when consumed regularly (daily). This is stated differently in the relevant literature and varies considerably between 20 and 60 grams of alcohol daily (see Health). Alcohol has a high nutritional value, about 95% is converted into energy.

The consumed alcohol passes from the stomach (20%) and small intestine (80%) first immediately into the bloodstream and then into the body tissues (absorption). The distribution depends on the amount of blood (approx. 5 to 7l) and the body size or body surface, the more extensive, the better the alcohol is distributed. Fat tissue, however, can hardly absorb alcohol. Therefore, alcohol is distributed more in a large, lean person and there is relatively less alcohol concentration in the blood compared to a small, fat person. The absorption is relatively slow and (depending on the contents of the stomach) is only completed one to two hours after the end of drinking (for calculation of alcohol level see under BAC).

Many scientists of the 18th and 19th century dealt with intoxication as a therapy and especially wine was regarded as the ideal drink to reach this euphoric state, although company was always assumed (excessive drinking alone is a sign of possible alcohol dependence). The naturalist Gottfried Leibniz (1646-1716) also dealt with this in his theory of the monadic soul and its inability to perceive the "subcritical" movements of the environment while awake. Only mild intoxication sharpens the senses and expands the sensory horizon of experience. The US psycho-pharmacologist Ronald K. Siegel writes in the book "Intoxicating Drugs in Animals and Humans" that intoxication as a fourth drive can no more ever be suppressed than sex, hunger and thirst.

The eminent Greek philosopher Kostis Papajorgis (*1940) unfolds a philosophy of the passion for delirium from Homer to Baudelaire and Dostoevsky to Jack London in the essay "Intoxication - A Philosophical Aperitif". Far from defending the numbing of everyday cares or a slurring society, Papajorgis reports on true intoxication, the secret of which lies in "relinquishing dominion over oneself" and which is the privilege of noble or vulgar souls who possess the propensity for self-destruction. Those who drink only water have something to hide (ex AMAZON).

However, the dangers to health must be pointed out. The difference between moderate consumption of wine and alcohol abuse is described in an essay by the Austrian poet Peter Rosegger (1843-1918). The amounts of alcohol that are presumably not harmful to health are explained under...