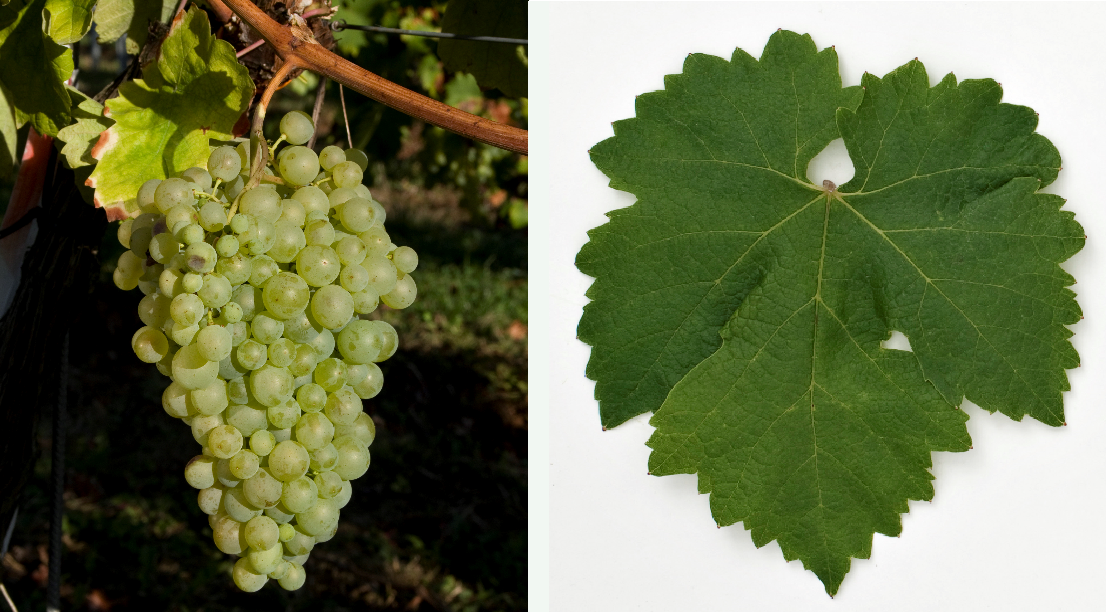 According to an unverifiable hypothesis, the variety is said to have been used in ancient times for the famous Pucinum mentioned by Pliny the Elder (23-79). In the late 18th century in the province of Treviso-Venetia several morphologically different varieties were called Prosecco. There is also a commune of this name, which is also referred to in most sources as the "place of birth". In the middle of the 19th century, Count Balbi Valier selected a special variety with round berries in the hills of the municipalities of Conegliano and Valdobbiadene and called Prosecco Balbi or Prosecco Tondo (tondo = round) (the variety was then a cross-breeding partner of the new breed Incrocio Manzoni 2.15). In the 1980s, the Conegliano Institute selected two other varieties for research purposes: Prosecco Lungo with oval berries (lungo = long) and Prosecco Nostrano (nostro = our).

Several DNA analyses between 2003 and 2009 revealed that these are not varieties, but three independent varieties. Prosecco Tondo (Glera) was now called Prosecco and Prosecco Lungo (Glera Lunga) kept the name for the time being. Prosecco Nostrano is identical with Malvasia Bianca Lunga. Although there are genetic similarities between Prosecco and Prosecco Lungo, a parent-offspring relationship can be excluded. The variety Vitovska (Vitouska) is the result of a presumably natural cross between Prosecco (Prosecco Tondo) x Malvasia Bianca Lunga (Prosecco Nostrano). At the end of this revealing history of origins, it turned out that the supposedly independent Slovenian varieties Briska Glera and Steverjana, as well as the Croatian Teran Bijeli are all identical to Prosecco.

In connection with the high qualification of the DOC area Conegliano-Valdobbiadene to DOCG Conegliano-Valdobbiadene Prosecco, in accordance with a decree issued by the Italian Minister of Agriculture on 17 July 2009, it was decided that from 1 January 2010 "Prosecco" is no longer the name of a grape variety but exclusively a designation of origin (confirmed by EC Regulation No 1166/2009). The grape variety Prosecco (Tondo) was renamed Glera and the grape variety Prosecco Lungo was renamed Glera Lunga. However, according to the Swiss biologist Dr. José Vouillamoz, this is misleading. This is because Glera is a general term for several different varieties. Moreover, studies have shown that the name Glera refers mostly to Prosecco Lungo and less frequently to Prosecco (Tondo), Vitovska and others.

The late ripening vine is sensitive to drought, as well as susceptible to both types of mildew, flavescence dorée and small berries. It produces straw to golden yellow, tangy, rather neutral white wines. Sometimes it has a nutty aroma and a slightly bitter aftertaste. There has always been confusion about the name, because Prosecco was and still is often mistakenly used as a synonym for a sparkling or semi-sparkling wine. This is also wrong because, in addition to sparkling wine, still wine (Tranquillo) is also made from the variety. The variety is excellent for the production of sparkling and semi-sparkling wines.

The variety, which is widespread in Veneto, is permitted in the DOC/DOCG wines Colli Asolani Prosecco, Colli di Conegliano, Colli Euganei (here under the name Serprina), Conegliano-Valdobbiadene Prosecco, Prosecco, Montello e Colli Asolani and Venezia. The main volume with over 90% is located in the province of Treviso in Veneto. The rest is distributed to other provinces of the region and the Friuli Venezia Giulia Region. In 2010, 18,255 hectares were registered in Italy. Small areas of land are also found in Slovenia and Croatia, and overseas in Argentina (10 hectares) and Brazil (173 hectares). In 2010, the variety (then called Prosecco) covered a total of 18,437 hectares. This is more than double the amount compared to 1990, when the area was 7,498 hectares. It thus occupied 42nd place in the worldwide grape variety ranking.