Producers and Wine Reviews about the "Bergerac AOC"

The appellation (also Bergeracois) is named after the town of the same name east of Bordeaux. With over 12,000 hectares of vineyards, it is the largest wine-growing region in southwest France. Wine is grown in about 90 of the 133 municipalities. They are located in the southeast of the Dordogne department along the river of the same name. As enclaves in this huge area there are the independent appellations Monbazillac, Montravel (with subappellations Côtes de Montravel and Haut-Montravel), Pécharmant, Rosette and Saussignac. 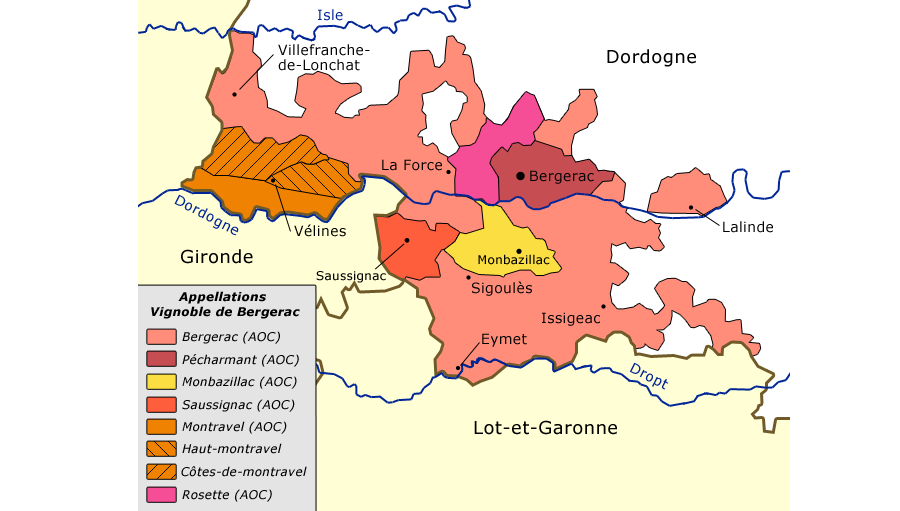 The Romans were already cultivating wine here in the 1st century and reached its highest flowering in the Middle Ages through the monasteries of the Benedictines and Cistercians. At that time, Bergerac was called Haut-Pays (Upper Country) together with other areas. For centuries Bergerac was in competition with its "big brother" Bordeaux and was also fought with unfair means. The Bergerac wines had to be shipped via the port of Bordeaux and small barrels were prescribed for the small neighbour. Since the customs duty was not calculated according to volume but according to the number of barrels, this made exportation more difficult, but nevertheless wine from Bergerac attained world fame at that time. A prominent lover was the Prussian King Frederick II the Great (1712-1786). After the Hundred Years' War (1337-1453) between England and France in the battle for French mainland (including Bordeaux), the Dutch wine trade dominated, and for two centuries it was used to promote sweet wine. The vineyards were about three times as large at that time.