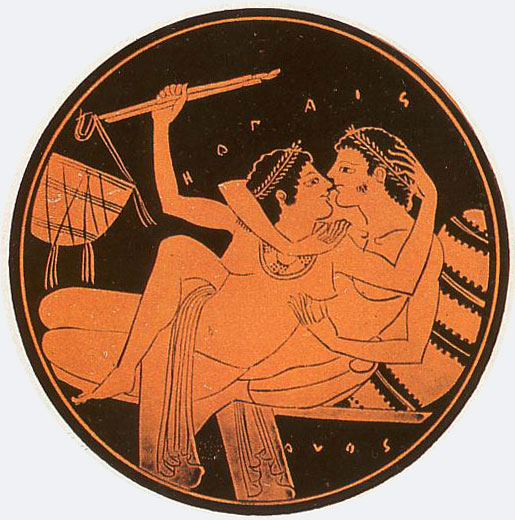 A drinking feast accompanied by witty conversations, jokes, songs, music, games and various performances with moderate, controlled wine enjoyment. In ancient Greece this was an integral part of the eating and drinking culture. The earliest mentions or descriptions of it come from the poet Xenophanes (570-470) from the sixth century BC, as well as from the historian Herodotus (482-425 BC) and the philosopher Plato (428/427-348/347 BC) with description of the rules in his law book "Nomoi".

The custom spread from Greece to Rome or Italy and was widespread mainly among the wealthy until the end of antiquity. The Greek term (also symposium) means "drinking together, social drinking". However, this should by no means be understood as a boisterous drinking and eating binge, because the main focus was on the common, godly and accordingly ritualized and civilized sociability.

Plutarch (45-125) describes the symposia "as a pastime of wine enjoyment, which is characterized by cultivated manners and ends in friendship". After the meal, the guests gathered around the house altar at the end of a meal (deipnon). The participants wreathed themselves with flowers, ivy and myrtle, as well as with white and red woollen bandages, in order to demonstrate their membership of the circle of Dionysus Servants. Now the symposium was introduced with ritual acts of purity such as washing hands and sprinkling with fragrant essences. Often one person was chosen for the evening as symposium-arch, who was called "Rex bibendi" (drinking king, also "Rex convivii" = banquet king) by the Romans at similar festivities.

This set out the procedure and the topics. He also determined the mixing ratio of wine and water, because in civilized circles pure wine was not usually drunk. The bell-shaped vessel used for this purpose was called a crater. A popular drinking vessel was the kantharos, which had two handles. Sometimes the symposium organiser determined the number of cups per participant. The degree of drunkenness was controlled by the mixture ratio and the number of cups, thus creating the desired pleasant intoxication as slowly and continuously as possible. The objective was that each participant should have approximately the same degree of drunkenness, which was difficult to achieve due to the different constitutions. It was expected of an honourable man that despite drinking he would remember his virtuousness and be able to return home unaccompanied.

In the beginning, a libation was offered to the gods by spilling some of it with a prayer. Then the determined topics were discussed. One solved puzzles, which one gave up to each other, or decided for the popular game to find matching comparisons. Occasionally, dancers, flute players or mime artists were invited. The historian Xenophon (430-354 B.C.) also reports on artistic performances. In the 5th and 4th centuries BC the skill game of Kottabos was also very popular. Afterwards the skolia (improvised poems) were sung. One of the principles was that everything said under the influence of alcohol could not be presented to the guest in a sober state. One of the duties of the symposium leader was to promote "free speech" and "spontaneous action" without injuring third parties. The loosened tongue of the revelers was an early form of "brainstorming" practiced in companies today.

Today, symposium is often referred to as cultural and economic meetings among experts for the purpose of finding ideas and exchanging views. The Roman poet Petronius (+66) describes a drinking binge similar to the symposium in some respects in his famous work Satyricon as the moral image of Rome in the first century after Christ. A list of many customs related to viticulture and wine enjoyment can be found under Customs in viticulture. The subject of alcohol abuse from antiquity to modern times with bizarre stories and prominent protagonists can be found under intoxication.