Wine-growing region or province with the capital of the same name in the north-west corner of Argentina with around 1,500 hectares of vineyards. The area lies between the regions of Jujuy in the north and Catamarca or La Rioja in the south. Most of the vineyards are located between 1,500 and 2,400 metres above sea level on the slopes of the Andean valleys in the Calchaquíes Valley around Cafayate. Some vineyards of the Colomé company are even at 3,111 metres, making them the highest vineyards in the world. The fine sandy and deep soils on stony ground offer excellent permeability. The water for the absolutely necessary artificial irrigation of the vineyards comes from the rivers Calchaquí and Santa María and their tributaries. Water is also obtained from wells up to 100 metres deep. Over 90% of the vines are trellised. 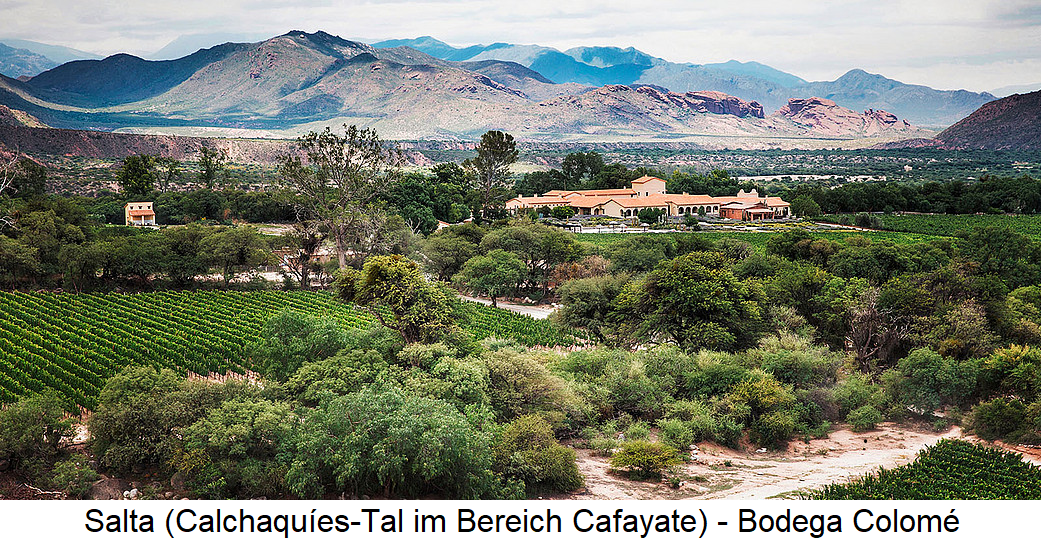 The differences in temperature are extreme - from 40 °C during the day they drop to 12 °C at night and to minus 6 °C in winter. There are long summers with a frost-free period from October to April. The summer thunderstorms often bring the dreaded local hail. The main growing area is "Valles Calchaquíes" west of the city of Salta. Aromatic white wines are made from the Torrontés Riojano variety that dominates here. Other varieties are Cabernet Sauvignon, Chardonnay and Chenin Blanc. 70% of the vineyards are in the Cafayate subarea. Important producers are the already mentioned Colomé, as well as the winery Etchart, Michel Torino and Yacochuya (Joint Venture Michel Rolland and Arnaldo Etchart), owned by Pernod Ricard.