As a rule, vines that are at least 25 years old are considered "old". The age is often used by producers for advertising purposes to indicate a particular quality. This is indicated on the label by designations such as "old vines" or in French "Vieilles vignes". Many French appellation regulations stipulate that no vines under three years of age may be used. Many major wineries in France only use vines with self-imposed minimum ages for their first wines. However, there is no generally applicable minimum age and the term is therefore used in different ways and has no meaning in wine law. Sometimes the term is also used to refer to ungrafted vines.

After new vines have been planted, the maiden harvest or pressing of the virgin wine will take place after three to five years at the earliest. The age of a vine has an effect on the quality of the wine, often the slogan "the older the better" is heard. Normally, the vigour and yield begin to decline continuously at around 20 years and a vine becomes uneconomical from around 50 years onwards. In general, vines in Central Europe hardly live more than 25 to 30 years, after which they are usually replaced due to lower yields. Slowly, however, a certain trend reversal can be observed. More and more wineries are cultivating vines with the respectable age of 50, 60, 70 and in individual cases even more than 100 years on smaller areas. The wines pressed from them are mostly produced in small quantities.

Wines made from them tend to (but not in principle) actually very often show a better quality. One of the reasons is the lower yield, but this should not be overestimated. This is because a number of other factors also play a role, such as the better, more intensive exposure (sunlight) due to the reduced growth of leaves and fruit. Likewise, the widely ramified root system of old vines has a positive effect, although root activity decreases with age. Quality is the complex interaction of grape variety, location and yield. However, there is also the phenomenon that some vine plants produce the best wine qualities especially in the first two to three years of yield. The reason for this is, among other things, an optimal relationship between foliage and fruit. But this is clearly the exception.

Subsequently, a list of vines or vineyards up to 500 years old in Europe and overseas. This list does not claim to be complete:

The Australian Weinut Penfolds presses a red wine in the smallest quantities of Cabernet Sauvignon vines planted in the "Kalimna" vineyard in 1885. A special project was "Ampoule" with the 2004 vintage, bottled in an exclusive glass container with a volume of 0.75 litres in a wooden case, one of which sold for an incredible € 160,000. This makes it one of the absolutely most expensive wines in the world. 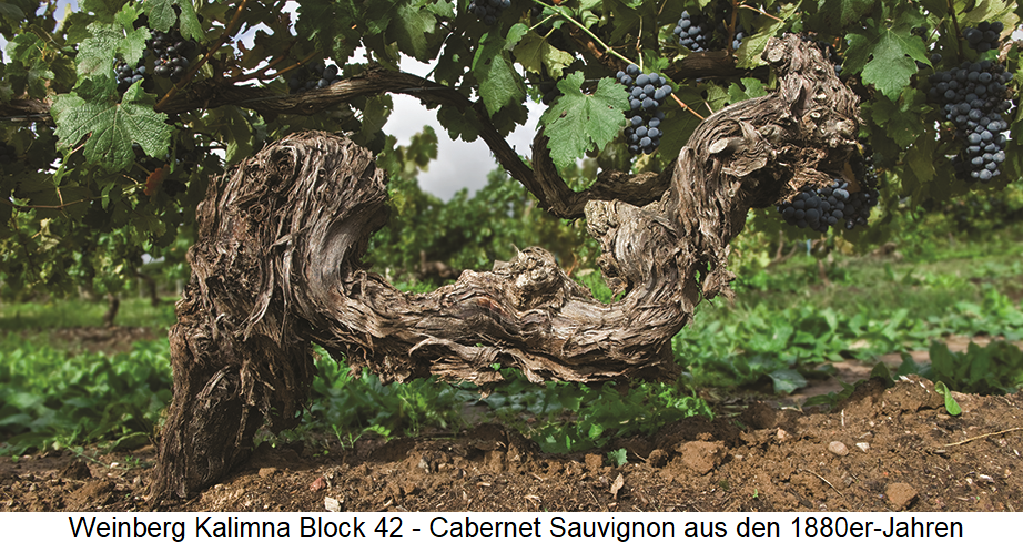 A 250 year old vine is in a glass house at Hampton Court Palace in south-west London, planted in 1769 by the gardener Lancelot "Capability" Brown (1716-1783). It is a Black Hamburg(Schiava Grossa). The circumference of the trunk is four metres, the longest shoot is 75 metres. It still bears rich fruit every year. On YouTube there is a video about this plant (click to view).

In the Touraine(Loire) area, there is a small parcel of Romorantin vines from around 1850. Some plots of Bollinger with Pinot Noir vines before phylloxera are also old. In the municipality of Prissian(South Tyrol) there is a 350-year-old vine of the variety Versoaln, from which wine is still being made. The Schneiders Winery cultivates root-true Riesling vines from 1860 in the Rosenberg (Pomerania, Moselle) vineyard, while the community of Producteurs Plaimont in the Département of Gers in southwest France monitors plots with old vines under the name "Conservatoire ampélographique". In the commune of Sarragachies, there is a vineyard with vines that are more than 200 years old, or age-old grape varieties.

According to the Guinness Book of Records, the oldest vine in the world, called "Stara Trta" (Old Vine), which is 450 years old, exists in Maribor(Slovenia). It is the variety Žametovka (Blue Cologne). It grows on a house wall in the Lent district on the left bank of the Drava River. In honour of this vine, events are held throughout the year under the title "From the vine to the wine" (slow. "Od trte do vina"). The highlight of the festivities is the annual harvest. A sweet red wine is made from the approximately 50 kg of grapes harvested each year. This is filled into quarter-liter bottles designed by the Slovenian artist Oskar Kogoj (about 100 annually). These are given away on the occasion of state visits to heads of state or to prominent visitors such as Bill Clinton or Pope John Paul II. A branch of the vine thrives in the courtyard of Ptuj Castle.

But there are probably even older vines. For in the year 2000 a several centuries old and so far unknown vine was found in the Burgenland community of St. Georgen (Austria), which was named after the place where it was found or the community. Later it turned out to be the long sought-after second parent of Grüner Veltliner. And in November 2008, five feral Orleans vines, presumably at least 500 years old, were discovered in the Disibodenberg monastery of the Racknitz vineyard (Odernheim, Nahe).

Under the following keywords you can find more information on this topic: