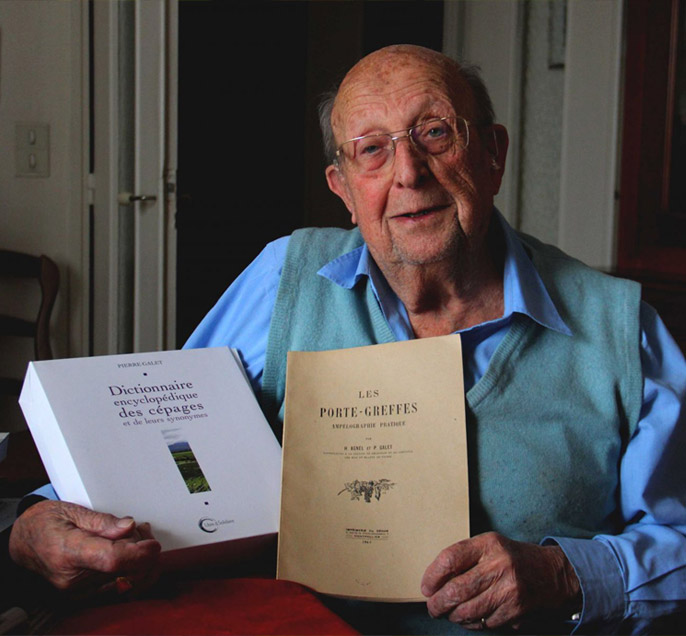 The French professor Pierre Galet (1921-2019), born in Monaco, is considered the creator of modern ampelography (study of the vine) and an absolute top expert in this subject. At the University of Montpellier, he was head of the Department of Viticulture for a long time. Among the students who studied under him were the famous ampelographers Jean-Michel Boursiquot (his successor in ampelography), Paul Truel, Lucie T. Morton (English translator of part of his works), Umberto Camargo (Brazil), Erika Maul (Germany) and Anna Schneider (Italy).

Galet dedicated his entire life to the study, identification and description of grape varieties on a scientific and botanical basis. His most famous works are the four-volume "Cépages et Vignobles de France", first published in 1954 and repeatedly supplemented, which contains colour pictures of American and French grape varieties. He also wrote the two-volume work "Maladies et Parasites de la Vigne", published in 1977 and 1982, as well as the fifth edition of the manual of destination "Précise Viticulture", published in 1988. In 1967 he published his doctoral thesis "Recherches sur les méthodes d'identification et de classification des Vitacces des zones tempérées". The "Dictionnaire encyclopédique des cépages" published in 2000 is considered a standard work with precise illustrations.