The largest wine-growing community in Austria by area of vineyards is the centre of the Lower Austrian wine-growing region of Kamptal and lies about 10 kilometres north-east of Krems. It includes the municipalities of Gobelsburg, Haindorf, Oberreith, Schiltern, See, Unterreith and Zöbing. Langenlois was first documented in 1082 as "Liubisa" (the lovely). Around 1100, 40 citizens were granted special rights and in 1519 Emperor Maximilian I (1459-1519) awarded the town the coat of arms of the market. Langenlois wines have been famous for many centuries. They were delivered to the court table of Emperor Charles VI (1685-1740) and served at the birth of his daughter Maria Theresa (1717-1780) (which, by the way, also took place during the visits to Austria of US President Ronald Reagan and Pope John-Paul II). Charles VI also confirmed the special rights of the "Forty-somethings", an association of Langenlois arable and wine farmers, which still exists today and is dedicated to the promotion of viticulture and culture. In 1990 the Ursin House was opened, a marketing and information centre about wine, tourism and culture plus a vinotheque with a tasting room. 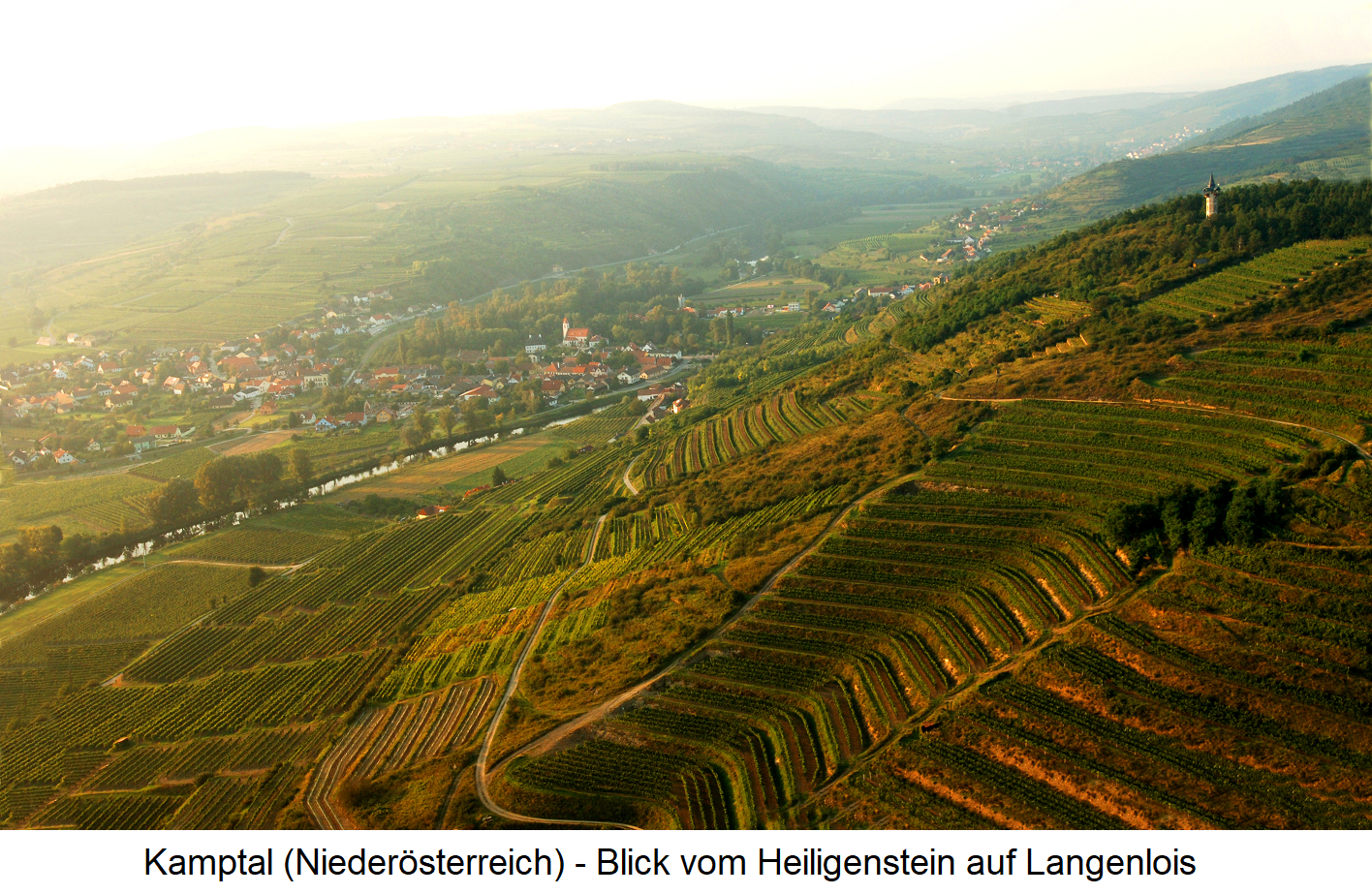 On approximately 2,000 hectares of vineyards, 80% of the white wine varieties are cultivated, these are mainly Grüner Veltliner (over a third), Welschriesling, Müller-Thurgau,Pinot Gris, PinotBlanc and Riesling. The three most common red wine varieties are Zweigelt, Blaufränkisch and Blue Portuguese. As a rarity the rare grape variety Queen Elisabeth is cultivated. A wine-growing landmark of the Kamp Valley is the famous Heiligenstein vineyard near Zöbing, which was already mentioned in 1280 as "Hellenstein". Other well-known vineyards are Dechant, Fahnberg, Hasel, Käferberg, Kogelberg, Ladner, Letten, Loiserberg, Sauberg, Schenkenbichl, Sonnwendberg, Spiegel, Steinhaus, Steinmassl, Tagler, Panzaun, Vogelsang and Wechselberg. In 2003, the Loisium wine experience world was opened in Langenlois, where a lot of information about wine can be experienced. Well-known producers are Auer Leopold, Bründlmayer Willi, Ehn Ludwig, Grillmaier, Groll Wolfgang, Hiedler Ludwig, Jurtschitsch, Leithner Thomas, Loimer Fred, Nastl Günter, Rabl Rudolf, Sax Rudolf, Steininger Karl and Summerer.