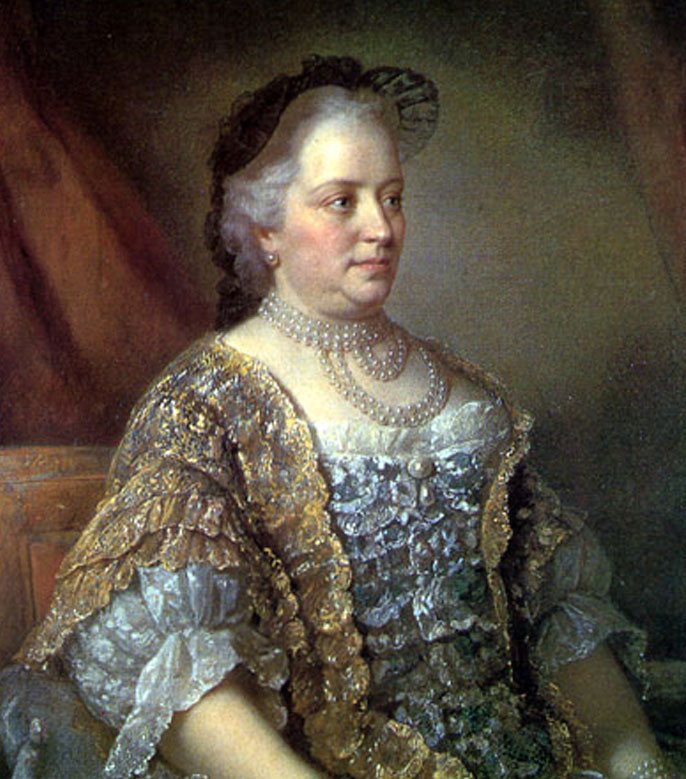 On the occasion of the birth of the Habsburg ruler Maria Theresa (1717-1780), a wine from Langenlois was served, which at the time was very popular at the court of her father Charles VI (1685-1740). At that time the Habsburgs had large estates in all the important wine-growing communities of what was then western Hungary (today's Burgenland) and had wine-growing and cellar management carried out according to the latest findings. Wines from the villages of Donnerskirchen, Großhöflein, Jois, Neusiedl am See, Purbach, Rust and St. Georgen were mostly delivered to the Viennese court cellars. It promoted viticulture in Austria and Hungary through many ordinances and laws and frequently visited its estates.

In 1743 she travelled through the Burgenland and also made a stop in the castle Mannersdorf at the Leithagebirge. She was invited by the community to the next grape harvest. In October of that year she appeared at the court and harvested a few grapes herself. An obelisk in the parish commemorates the memorable event with the following inscription: "Here Maria Theresa's hands, which were filled with scepters, virtue and laurel, were used to collect grapes and all the laborious tasks of harvesting

Until now, history has been vouched for, but now comes the legendary part: the empress and her husband walked along a vineyard. The fully ripe grapes lured them and so they picked one of them. No sooner had they eaten some berries than the horns of the vineyard keepers sounded all around them. Soon the pair of rulers were surrounded by scowling guards who demanded a harsh penalty of 5 guilders. Of course, as is usual with such high personalities, neither of them had any cash with them and so they were escorted to the village judge. They were locked up in the village dung heap, but later everything cleared up.

One of the frequently visited favourite castles of the ruler was Halbturn Castle in Seewinkel on Lake Neusiedl in Burgenland This still existing castle winery was bought by her husband Stefan She also appreciated the wine from the free city of Rust - especially the then already famous Ruster Ausbruch - and was a guest here in 1760. In 1773 she visited the princely castle and winery Esterházy in Eisenstadt. She loved the Hungarian Tokaj, her court physician Gerard van Swieten (1700-1772) prescribed that she drink it every day. She sent 600 bottles to the Russian Czarina Elisabeth (1709-1762). In Styria she protected the local wines, such as the Schilcher, by paying customs duties.