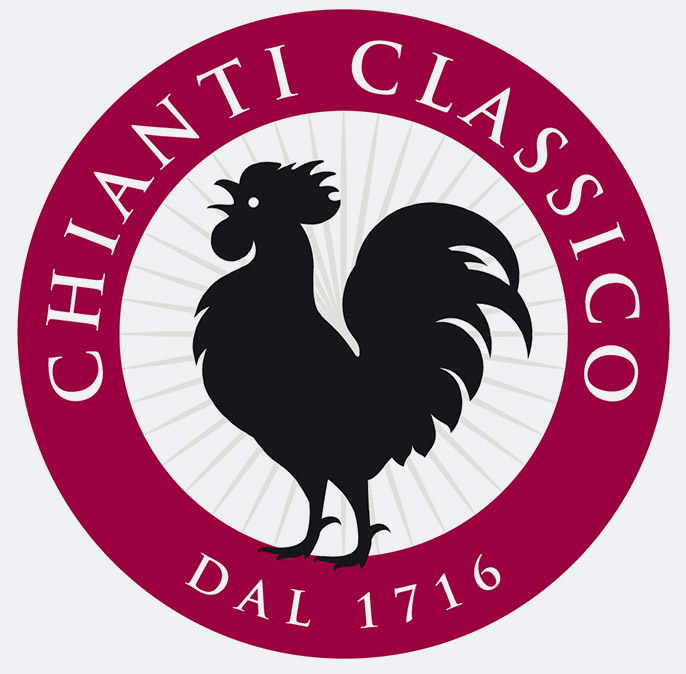 Trademark of the "Consorzio del Marchio Storico Chianti Classico" (Consortium of the Historical Chianti Classico Brand), founded in 1924. At that time there were 33 members, which have grown to over 600 today. They produce about 80% of the Chianti Classico. The "Black Rooster" is the historical symbol of the "Lega militare del Chianti", a kind of Chianti military federation that ruled the territory from the 14th century onwards.

According to legend, a black rooster also played an important role in defining the geographical boundaries of the Chianti area. The Medici court painter Giorgio Vasari (1511-1574) painted the black cock as an allegory of the Chianti Classico on the ceiling of the Salone dei Cinquecento in Florence's Palazzo Vecchio.

The Chianti protection association used to bear the name "Consorzio del Gallo Nero", but the Californian wine multinational Gallo claimed the part of the name "Gallo Nero" for itself. After a long legal dispute, it was decided in 2005 that the name "Gallo Nero" and the Black Rooster could no longer be used in combination outside Italy by the protection consortium. Therefore, the change had to be made to the above-mentioned designation. The second association "Vino Chianti Classico" reached an agreement with the Consorzio in 2005 after 18 years of dispute. A joint marketing concept was developed. Now all wines from the Chianti Classico growing area bear the Gallo-nero symbol next to the pink DOCG band. Presidents of the consortium: from 2006 Marco Pallanti (Castello di Ama), from 2012 Sergio Zingarelli (Rocca delle Macie) and from 2018 Giovanni Manetti (Fontodi).