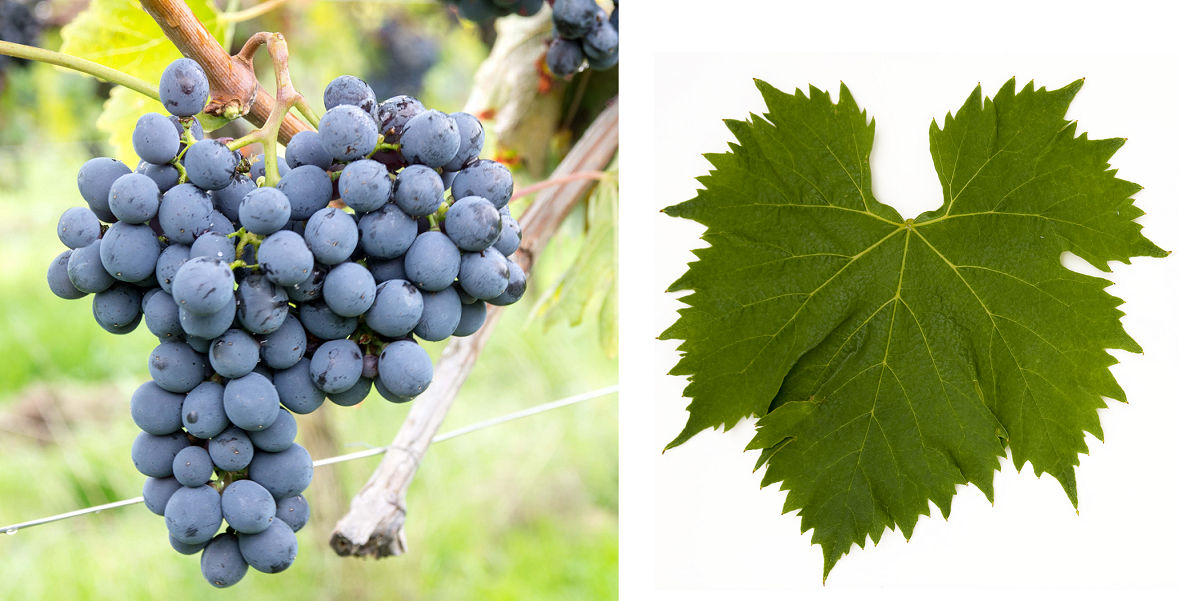 The variety was first mentioned under the name "Sangiogheto" by the Italian agronomist Giovanni Soderini (1526-1596) in his work "Trattato della coltivazione delle viti, e del frutto che se ne puô cavare", published posthumously in 1600. It is said that the name is of Latin origin (Sanguis Jovis), meaning "blood of Jupiter", which indicates an ancient origin of the vine. According to an unverifiable hypothesis, an ancestor is said to have been known to the Etruscans. In any case, it is one of the most important Italian leading varieties with numerous descendants.

The exact parentage (parenthood) has not been clearly determined. The Swiss biologist Dr. José Vouillamoz discovered in 2007 that Sangiovese comes from a cross between Ciliegiolo x Calabrese di Montenuovo (i.e. Sangiovese is a descendant). However, this is in contradiction with later analyses by Dr. Manna Crespan, who found that Ciliegiolo is a parent of Sangiovese x Muscat Rouge de Madère (i.e. Sangiovese is a parent). Finally, in 2012, Thierry Lacombe's analysis revealed two possible parentheses for Sangiovese. These are Frappato di Vittoria (Frappato) x Foglia Tonda or Gaglioppo x Foglia Tonda. However, since some of these varieties have a parent-offspring relationship with Sangiovese, this is not so surprising. But because of two possible variants and only 20 matching DNA markers the result is at least doubtful (see molecular genetics).

There are numerous clones of the variety with slightly different taste profiles. In the past, based on the research published in 1908 by the ampelographer Girolamo Molon, a rough classification was made according to berry size and, derived from this, quality into two groups: Sangiovese Grosso(Brunello and Prugnolo Gentile, as well as Sangiovese di Lamole in Chianti) and Sangiovese Piccolo in other Tuscany zones. However, this is no longer considered justified, as there are no genetic differences in the DNA profile (see also under Pinot for this phenomenon).

Due to the great adaptability to different soil types over the centuries, different taste directions resulted. At the end of the 1990s the best clones were selected. The vine, which has a good yield, is susceptible to botrytis and yellowing, but is resistant to drought. It is characterised by slow, late ripening. As a rule, it produces red wines that are not very colourful, but rich in alcohol, acidity and tannins, with aromas of cherries, violets, plums and leather, as well as great ageing potential with appropriate ageing.

The area under cultivation in Italy is 71,619 hectares, with an upward trend. This makes it by far the most common Italian grape variety, which is widespread in almost all regions but especially in Tuscany. It is the basis for many famous Italian top red wines. These are above all the DOCG wines Brunello di Montalcino, Carmignano, Chianti, Chianti-Classico, Conero, Morellino di Scansano, Rosso Conero, Torgiano Rosso Riserva and Vino Nobile di Montepulciano, as well as countless DOC wines and also some of the so-called Super Tuscans such as Tignanello.

In France, the variety occupies 1,589 hectares, with a constant trend. The majority is in Corsica, where the variety was imported from Italy by the Genoese who dominated the island until the end of the 18th century. There, it is mostly registered under the name Nielluccio in all appellation red and rosé wines, as well as in IGP wines (local wines). There are other smaller stocks in Europe in Romania (88 ha), Turkey (9 ha) and Hungary (1 ha).