The vine subgenus Vitis subg. Vitis is divided according to its geographical occurrence into an American, an Asian and a European group. In the European group, probably as a result of the Ice Age, there is only one species (species) Vitis vinifera, under which all wild and domesticated grape varieties of the European vine are subsumed. The name means "vine-bearing vine".

The wild subspecies is also often called Vitis vinifera ssp. sylvestris Gmelin (also Rhenish wild vine). The name part "sylvestris" means "living in the wild". The last part of the name refers to the German botanist Johann Georg Gmelin (1709-1755), who first separated this subspecies. This species is diocesan (dioecious); that means there are male and female plants with unisexual flowers. The term "secondary unisexual" means that the species is originally bisexual in its disposition, but one sex is suppressed. Its area extends from the Caucasus to the southern Mediterranean and north to the Danube floodplains of the Lobau at Vienna (Austria) and to Germany in the Rhine Valley.

A regional expression of sylvestris is Vitis vinifera ssp. caucasica Vavilov (Caucasian wild vine, Danube wild vine), which has been found east of the Caucasus in Afghanistan, Armenia, Azerbaijan, Iran and Turkmenistan. It was first described by the Russian botanist Nikolai I. Vavilov (1887-1943). Today, however, this differentiation can no longer be traced on the wild vines that still exist. 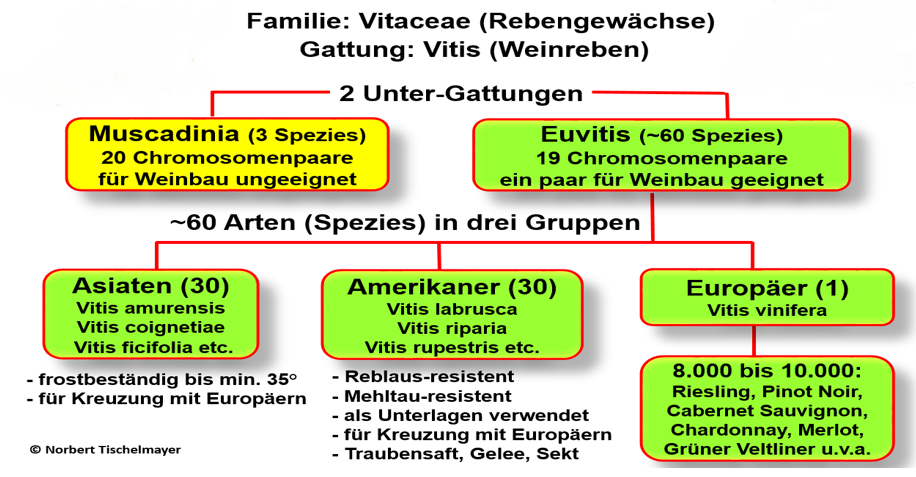 Wild forms of the species Vitis vinifera survived the ice age on the Black Sea and Eastern Mediterranean. Due to the extreme environmental conditions, only one species survived, as already mentioned. After the last ice age, wild vines spread westwards and along the Mediterranean coast into the floodplains of all of Southern and Central Europe. They were still widespread in the temperate zones of Europe and the Near East until the second half of the 19th century. With the beginning of the intensive use of the forests in the 17th and 18th centuries, the liana-like wild vines growing in the trees were largely cut down and destroyed.

On the Rhine, Rhône and Danube (e.g. Wien-Lobau) residual populations have been preserved to this day. The wild vines have been cultivated by man over thousands of years. The cultivated subspecies Vitis vinifera ssp. vinifera comprises all cultivated varieties of grapevine developed in Europe without any cross-breeding with other species. This species is monoecious (monoecious) with mostly hermaphroditic flowers. This means that female and male organs are united in one flower. The old part of the name sativa (literally "sown") means "cultivated". The first varieties probably first appeared in Transcaucasia.

Generally to be separated from Vitis vinifera are the Asiatic wild species east of the Caucasus, mostly found in China and Central Asia, the so-called Asian vines, which, like the American vines, comprise a group of species (species). All European vines have 19 pairs of chromosomes (2n = 38), which is why they can be crossed with all Asian vines and also with most American vines without any problems (because of the same numbers). For the parentage information one writes Vitis vinifera or Vinifera.

There have been repeated attempts to classify the numerous cultivated varieties of Vitis vinifera according to geographical or botanical criteria. The best known system was developed by the Russian researcher Dr. Alexander Negrul (1900-1971), who divided the European vines into three large regional groups, which he called Proles. With colonisation, from the 16th century onwards, European varieties were also spread outside Europe to other continents where they had not existed before or where no vines existed at all (see also New World).

Due to the general sensitivity of the European vine roots to phylloxera, which was introduced from America, European vines have not been cultivated rootlessly for well over a hundred years. Instead, so-called scions (upper parts of noble varieties) are grafted onto phylloxera-resistant rootstocks of American vines. This process is called grafting. These are resistant to phylloxera at the roots, so that they are used as rootstocks for the grafted European noble varieties. The leaves of the European vines, on the other hand, are usually not attacked.

As this means crosses between different species, these are also called "interspecific crosses". The results of the sowings are always hybrids. All vine varieties described in this work, for which no other species is explicitly mentioned, such as Vitis labrusca or Vitis coignetiae, are descendants of the European species Vitis vinifera. For this complex subject area, see also a list of all grape variety-specific keywords under grapevine