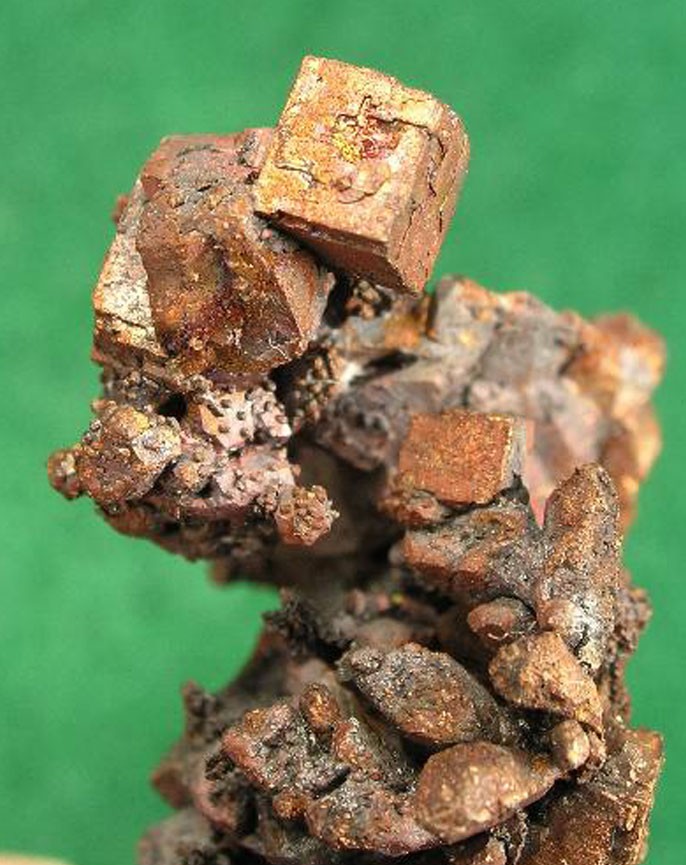 Light red, rather soft and tough heavy metal or element (Cu). The Latin name Cuprum is derived from "aes cyprium" (ore from the island of Cyprus), where copper was extracted in ancient times. In nature it sometimes occurs in solid form, but mostly in minerals such as coloured copper ore, chalcopyrite and chalcopyrite. Copper is a component of blue haemocyanin, which serves as a blood pigment for oxygen transport in many molluscs and arthropods. Copper is also an essential trace element in all higher organisms as a component of many enzymes. As a nutrient, it is required in small quantities for vine growth, as it promotes the formation of chlorophyll, which is important for photosynthesis. Copper deficiency is morphologically manifested by narrow pale green leaves, reduced shoot growth, shortened internodes and weak root development.

Downy mildew, which was introduced into Europe in the 1870s, was subsequently successfully combated by the Bordeaux broth; this is a copper sulphate solution. Since then, copper or copper compounds have been used extensively as fungicides in viticulture. In the last 100 years this has resulted in a copper surplus in the vineyards. Copper accumulates in the soil and is difficult to break down. This leads to toxic conditions, especially on acid soil. Excessive copper content impairs fertilisation, disrupts root function and causes the leaves to turn yellow. A fertilization with humus or calcium (lime) neutralizes the effect. Too high a content in the wine leads to cloudiness and a metallic-bitter taste or the wine defect black break. The taste perception threshold is 2 mg/l. According to the EU regulation, the copper content in the wine must not exceed 1 mg/l.