Simon the fisherman (0-64) was called as a disciple by Jesus together with his brother Andrew. Jesus called him a "rock" (Greek Pétros) on which he wanted to build his church (Matthew16, 16-19). Later, Peter traveled to Rome and worked there as a church leader. Paul (0 to 64) - then still Saul - was the son of wealthy Jewish parents from Tarsus in Asia Minor with Roman citizenship. As a result of his religious zeal, he was forced to persecute the emerging Christian church, which he considered a Jewish sect that deviated from the law. The Bible tells us that in the year 35/36, when Stephen was stoned to death, he guarded the clothes of the stoners. Saul was commissioned to lead further persecutions of Christians in Damascus, but a wonderful encounter with the risen Jesus before Damascus changed his life completely - he went from being Saul to being Paul (Acts 22:5-16; 26:12-18). In the year 64 Peter and Paul met in Rome, and together they caught the magician Simon, who fell to his death with his flying skills. 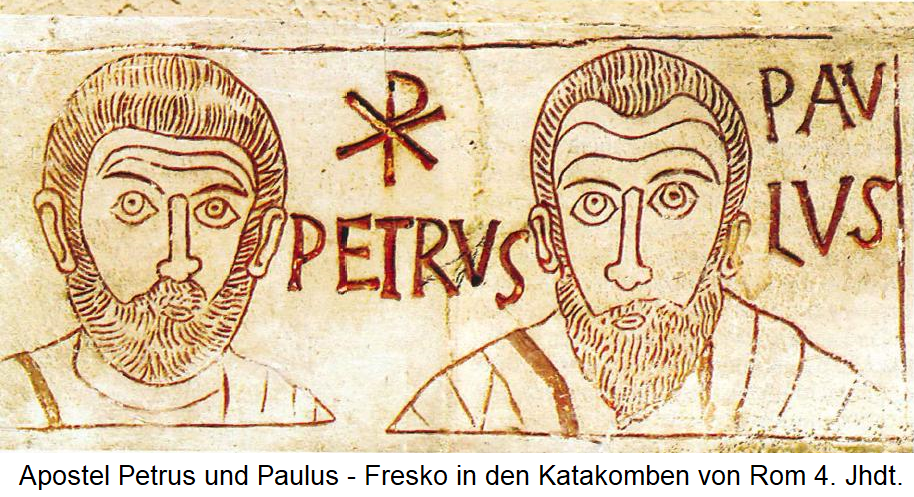 Emperor Nero (15-68) lost his court artist with Simon and had Peter and Paul thrown into prison. As a Roman citizen, Paul was granted an honourable death by decapitation with the sword. Before the execution of Peter, friends managed to get him out. The fleeing Peter met Christ at the gates of Rome and asked the famous question: "Quo vadis, Domine?" When Christ replied that he was going to Rome to be crucified once more, Peter decided to return to Rome and was then, at his own request, crucified in Nero's circus - the other way round, since he was not worthy to die the same death as Jesus Christ. As patron saint, Paul is responsible for rain and fertility of the fields, among other things. The commemoration day of both is 29 June. In northern wine-growing areas this is the time of the beginning of the véraison (beginning of ripening). Two calendar sayings are: 1) If it rains on Peter and Paul, the winegrower's harvest will rot. 2) Peter and Paul clear, brings a good year. See also under Farming Rules and Wine Saints.