Fragrances determine our lives, as the well-known gastronomy and wine expert Guy Bonnefoit writes in his book "Fascination Wine & Flavours": The human skin has a surface of about two square meters and contains up to 300 odor components. Depending on the physical condition and state of health, the odorous substances also change. A dog can differentiate precisely between people who are well-disposed towards it and those who are anxious about it. Every mood has its own smell - so you can smell the state "happy". An experienced country doctor reports that he is able to recognise certain illnesses when entering a sickroom. Every illness develops its typical "smell". Diabetes smells fruity, diphtheria sweetish, typhoid fever like baked bread and gout like lion cages or pet shops (end of quote). 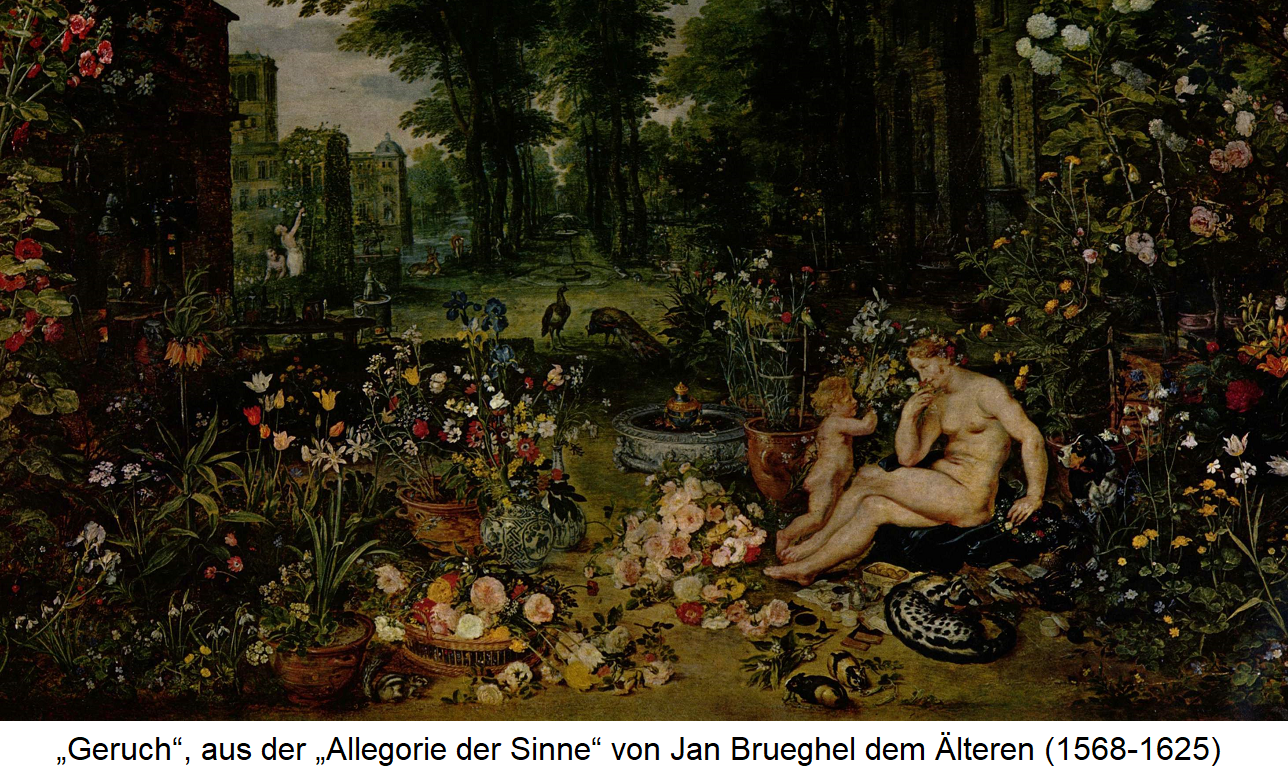 The sense of smell is the ability to perceive gaseous substances or substances dissolved in water on a molecular level. Like taste, smell is one of the chemical senses. This ability is only proven in vertebrates and insects. Smell perceptions are more than all other sensory organs very strongly emotional. This means that they are immediately evaluated as pleasant (smells) or unpleasant (stinks). In behavioural biology, odour has a special significance with regard to food intake, reproductive behaviour and the recognition of enemies. Odours promote appetite and the formation of digestive juices. And the statement "that you can't smell someone" is much more than just a play on words.

Scientific experiments have shown that odour unconsciously plays a major role in the selection of partners. Odours also play an important role in memory and associative brain processes. Odours are perceived olfactorically via the yellow olfactory mucosa (about 2 x 5 cm²) in the upper part of the nasal cavity directly under the brain. Odours are not only nasal (orthonasal, pronasal) when inhaled via the two nostrils, but also retronasal when exhaled from the oral cavity via the nasopharynx to the olfactory mucosa. It depends on the quantity of an odorous substance when it is perceived. This is called the perception threshold (limit).

Around 20 million olfactory threads absorb the fragrances. A dog has ten times as many olfactory threads, i.e. around 200 million on 2 x 25 cm². These take up the scent, act as receptors and pass them on to the olfactory bulb. Here they are first perceived and then passed on to the brain for "dissolution". Women have about 50% more nerve cells in the olfactory bulb and therefore have a better olfactory capacity. The olfactory brain (rhinencephalon) lies as a separate part below the right half of the cerebrum and is connected to the limbic system (limbis = joining). This is responsible for the entire processing of emotions such as love, sexual arousal, fear and anger. Since wine also contains numerous pheromones (sexual fragrances), wine can also act as an aphrodisiac. However, two sensory systems are involved in olfactory perception. These are the olfactory system and the trigeminal system (concerning the sense of touch).

A strong limitation results in the case of a rhinitis, in which one perceives the taste directions, but no odours. Smell impressions are often wrongly attributed to taste. When enjoying food and drinks, as well as wine, these impressions received by the tongue and nose only in the brain are mixed to form an overall impression, so that the definitive origin can no longer be traced. The combination of taste and smell sensations results in a complex variety of sensory nuances. The human tongue, with its six taste directions, is almost primitive compared to the nose. Richard Axel and Linda Buck received the 2004 Nobel Prize for Medicine for their detailed unravelling of the sense of smell. The two US researchers showed that humans can absorb, remember and distinguish between around 10,000 odours.

In order to recognise the smell, the concentration of the scent must be about 50 times higher. Fragrances can open the gates of memory. But civilized people have forgotten how to identify odors precisely. Because we no longer need to do so as in primeval times, when survival depended on it. In addition, according to one hypothesis, when "standing up", humans lost part of their sense of smell and at the same time increased their performance in seeing and hearing. However, the nose is still much closer to our psyche than the eye or ear. In wine the numerous aromatic substances cause the scent impressions. The University of California developed the so-called aroma wheel, which helps to identify these fragrances. During normal breathing only a small part of the scents reach the receptors. Therefore, when evaluating a wine, one must "sniff" with the nose deep in the glass. However, this must not be too intensive, as otherwise the fragrances will pass the olfactory mucosa and not be absorbed there.

At the end of June 2014, the Technical University of Munich (TUM) issued the following press release: "Smell code of food decoded". Scientists from TUM and the German Research Institute for Food Chemistry (DFA) carried out a meta-analysis of the odour patterns of 227 food samples. The study clarified and identified the molecular odour signatures of food. More than 10,000 different volatile substances are found in food. However, only about 230 of them characterize the aroma of the most common foods. And only three to 40 of these key aromas encode the typical and unmistakable scent of a single food, from pineapple to roasted meat to Vienna. The aroma of sour cream butter, for example, is coded by a combination of only three key molecules, while fresh strawberries have 12 and cognac is the leader with 36.

The chemical odour codes are translated into olfactory stimulus patterns when food is consumed. To do this, the key odour substances must interact with one or more of the 400 olfactory receptors in the nose. Prof. Thomas Hofmann (Chair of Food Chemistry and Molecular Sensory Analysis) comments: "The combination of only a few key odours can produce an authentic olfactory perception. However, the olfactory quality of the combinations is not determined by the individual components. During the perception and neuronal processing of the odour patterns, the individual aroma components do not simply add up. Instead, the individual information is translated into a new olfactory shape. Given the combinatorial nature of the chemical aroma code and the large number of around 400 olfactory receptors, the number of perceivable odours seems to be almost unlimited".

The identification of odour codes opens up completely new possibilities for biotechnological applications. For example, the fact that the aroma codes of crops and fruits are known on the molecular level might be helpful in breeding: In the past, breeding was less focused on sensory quality than on increasing yield and area output. The findings also form the scientific basis for the next generation of bioaroma production, which uses the potential of optimized biosynthetic pathways in plants for the industrial production of high-quality food odorants.