Singular situation in Homburg am Main, district of the market Triefenstein (area Maindreieck) on the left bank of the Main in the German cultivation area Franken. The name is derived from the Celtic "Calemont", which means "bare mountain" or "hot mountain" and refers to the sparse vegetation on the peaks. The vineyard was probably planted by Benedictine monks as early as the 9th century. The first documented mention was in 1102 with the foundation of the Triefenstein monastery. During the Thirty Years' War (1618-1648) the Swedes plundered the monastery in 1631. At that time the cellars there stored over 100,000 litres of wine (approx. 150 Fuder à 720 litres), a large part of which probably came from Kallmuth. The last Triefenstein provost Melchior Zösch (1725-1802) had the retaining walls in the vineyard built at the end of the 18th century.

As a result of secularisation during the Napoleonic Wars, the Triefenstein monastery parts of the vineyard came into the possession of the princely house Löwenstein-Wertheim-Rosenberg at the beginning of the 19th century. In 1872, the princely house purchased for 20,000 Goldmarks a part of the vineyard that had previously been in the possession of the Staatlicher Hofkeller Würzburg. In 1957, the remaining parts of the original vineyard were exchanged for Löwenstein. During the Nazi era in 1935 and then also in 1973, extensions were made. These areas comprise about 30 hectares, which are formed by an area at the back of the mountain and two unconnected enclaves (see map below). 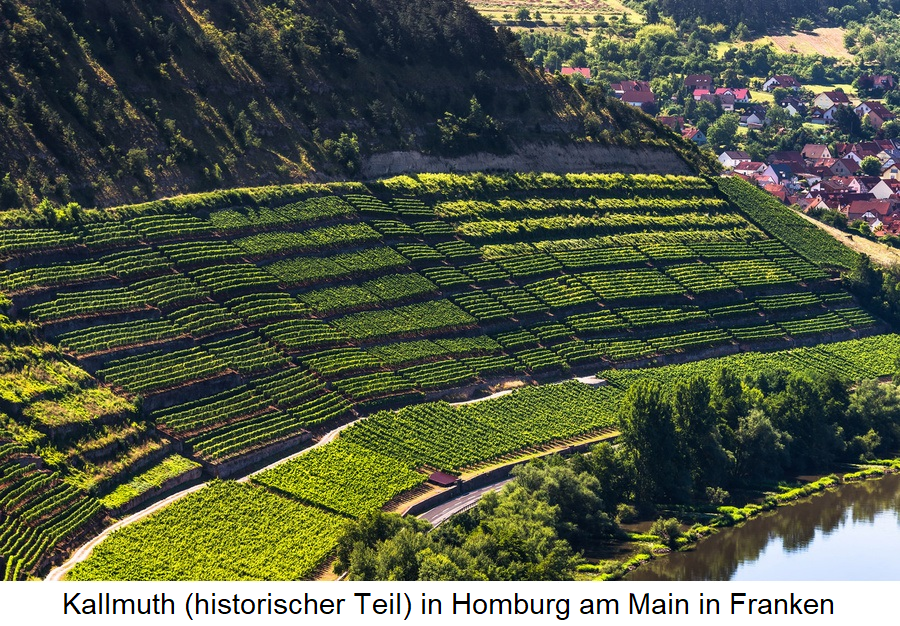 The historical part was put under monumental protection in 1981. It comprises 12 hectares of vineyards (of which 8 are terraced), is the sole property of the Fürst Löwenstein Winery and has been classified as a VDP Grosse Lage under the designation "Fürstlicher Kallmuth". The slope extends from 140 to 240 metres above sea level and is terraced with a total of 12 kilometres of dry stone walls, two to five metres high. Up to 270 sandstone steps lead from the Main valley to the end of the vine rows. With an inclination of 40 to 80% to the west, as well as in other areas with 20 to 50% south-west to south-east oriented vineyards, it forms a basin that is only open to the Main.

In some areas, the site is one of the steepest vineyards in Germany, with skeleton-rich soils with red sandstone in the upper and shell limestone in the lower areas. The climate is sub-Mediterranean, with temperatures reaching 50 to 60 °Celsius in summer, even in cooler years. The climate with low precipitation is compensated by water-bearing layers with five springs in the mountain. On the mountain there are many species of orchids and other rare thermophilic plants, as well as rare butterfly species such as sky-blue blue-winged blueberry, marginal spotted rams and acacia spotted butterflies. The Silvaner, Riesling and Sauvignon Blanc varieties are cultivated here. 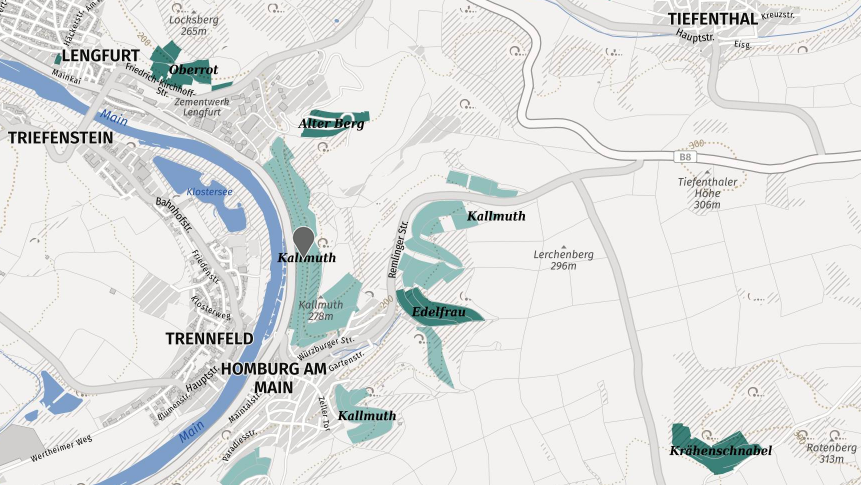 Shares of areas at the back of the Kallmuth mountain and the two enclaves are held, for example, by winegrowers of the GWF (Winzergemeinschaft Frankenwein), as well as the Deppisch Johannes, Huller and H. Martin vineyards. Red wine varieties such asPinot Noir, Domina, Cabernet Dorsa and Regent are also grown here.