The Austrian viticulture expert Professor Dr. Fritz Zweigelt (1888-1964) studied natural science in Graz and later habilitated at the Vienna University of Natural Resources and Applied Life Sciences. In 1912 he joined the Klosterneuburg Viticulture Institute (Lower Austria), later becoming director of the institute and holding this position until 1945. He also made himself strong in the fight against direct carriers or hybrids. He is considered a meritorious scientist in the field of vine breeding, but he came under strong criticism after the end of the war in 1945. As a convinced National Socialist, he joined the NSDAP, which was then banned in Austria, as early as 1933 and became known for his inglorious statements and actions. After the war he was classified as a "follower" and not prosecuted. 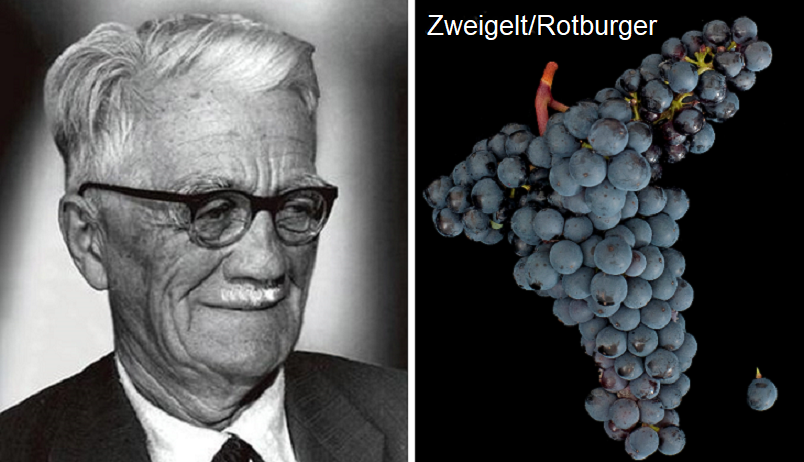 Fritz Zweigelt was very active as a journalist and published over 500 articles. His name is inseparably connected with the new breed Zweigelt (picture) which he created and named after him. In this context he said: "The fact that there is a Zweigelt grape arouses mixed feelings in me - on the one hand the hope that it will probably outlive me and on the other hand the hope that some people will be intoxicated by this wine, just as I was intoxicated at the time by the joy of successful breeding.

Due to its role in the so-called Third Reich, there were and still are discussions about changing the name of the grape variety, but this is difficult because of the established name. In the meantime, some winegrowers in Austria are offering the variety again as Rotburger. Other new varieties of it are the less successful varieties Blauburger, Goldburger and Jubiläumsrebe. In Langenlois(Kamptal) his great-grandson Thomas Leithner runs a winery and cultivates the Austrian grape variety created by his great-grandfather.