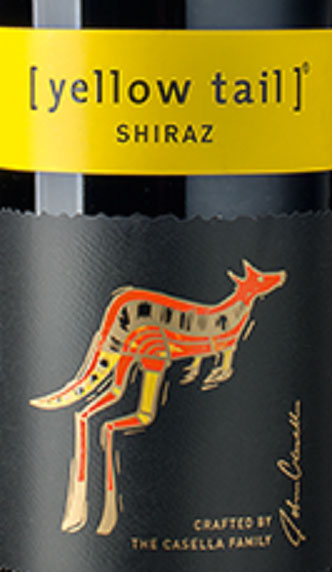 Australian wine brand or branded wine that became a real export hit from the beginning of the 21st century. It is produced by the Australian company Casella Wines. The Casella family had been growing wine in Italy since 1820. Filippo and Maria Casella emigrated to Australia in the 1950s and founded a winery here in Yenda in the Riverina region (New South Wales) in 1965. At that time, the vineyards covered 16 hectares. From 1969 onwards, the company produced its own wine and marketed it in casks. In 1994 the business was taken over by son John Casella (managing director). He is supported by his two brothers Joe (Sales Director) and Marcello (Vineyard Manager). Phillip (Joe's son) is the sixth generation of the family to run the business. Chief Winemaker is Alan Kennett. In the year 2000 the new brand Yellow Tail with the striking yellow kangaroo was created and within a few years became a huge success. The initial quantity in the USA of 200,000 boxes in 2001 increased to an incredible 7.5 million boxes by 2004. The brand also established the run of branded wines with an animal as logo (see Critters).