Producers and Wine Reviews about the "Wachau DAC"

One of the eight specific wine-growing areas in the Austrian province or generic wine-growing region of Lower Austria. It is crossed by the Danube, on whose northern banks many of the mostly terraced vineyards are located. The vineyards, some of which are very steep, are among the steepest vineyards in Austria, 40% of which are fortified with dry stone walls. In 2021, dry-stone walls were included in the UNESCO World Heritage List. The narrow valley along the Danube is only 33, the wine-growing area 15 kilometres long. The gateway to the west is the Benedictine Abbey of Melk, to the east it is bordered by the over 1,000-year-old town of Krems. In the 5th century, the monk Severinus (410-482) lived in the midst of vineyards near Favianis (Mautern), which is evidence of wine growing. The English King Richard the Lionheart (1157-1199) was captured near Wien on his return from the Third Crusade and held at Dürnstein Castle.

King Henry II (973-1024) donated the small settlement of Liupna, today's Loiben, to the Tegernsee Monastery in 1002. At the turn of the century, the Viennese mayor Karl Lueger (1844-1910) served a Loiben wine at a ball to Emperor Franz-Joseph I (1830-1916), who commented: "I would not have thought that there was such good wine in my countries". Lueger then suggested the name "Loibner Kaiserwein". The Benedictine Abbey of Melk owned vineyards not only in the Wachau, but also in the municipalities of Gumpoldskirchen, Pfaffstätten and Baden. In Rohrendorf near Krems, a vineyard of around 100 hectares is still owned by the monastery today; it was donated by Leuthold von Kuenring in 1113.

In the year of the second Turkish siege of Wien in 1883, wine from the Abbey cellar was used to extinguish a fire that had already engulfed the church tower and threatened the bells. In 1703, 24,000 buckets of wine were stored in the cellars, the equivalent of 1.3 million litres! Finally, in the 18th century, the income from the tithe wine made it possible to rebuild Melk Abbey into the magnificent Baroque building it is today. Due to climate changes and strict levies, wine culture declined. It was not until the middle of the 19th century that top wines were again produced through the introduction of new varieties such as Veltliner and Riesling.

The terrain is mostly shallow with high and therefore heat-retaining mineral content. The soils are mainly made up of loess, sand and rigsols. In some terraced areas, the humus layer is no thicker than 50 centimetres, with bare granite underneath. The Atlantic-Pannonian mixed climate is characterised by the moisture-giving Danube, which has a heat-increasing effect through reflection. An important factor for the special climate is the large temperature difference between day and night, which has a positive effect. The Wachau was designated a UNESCO World Heritage Site in the category "Cultural Landscape" in 2000. 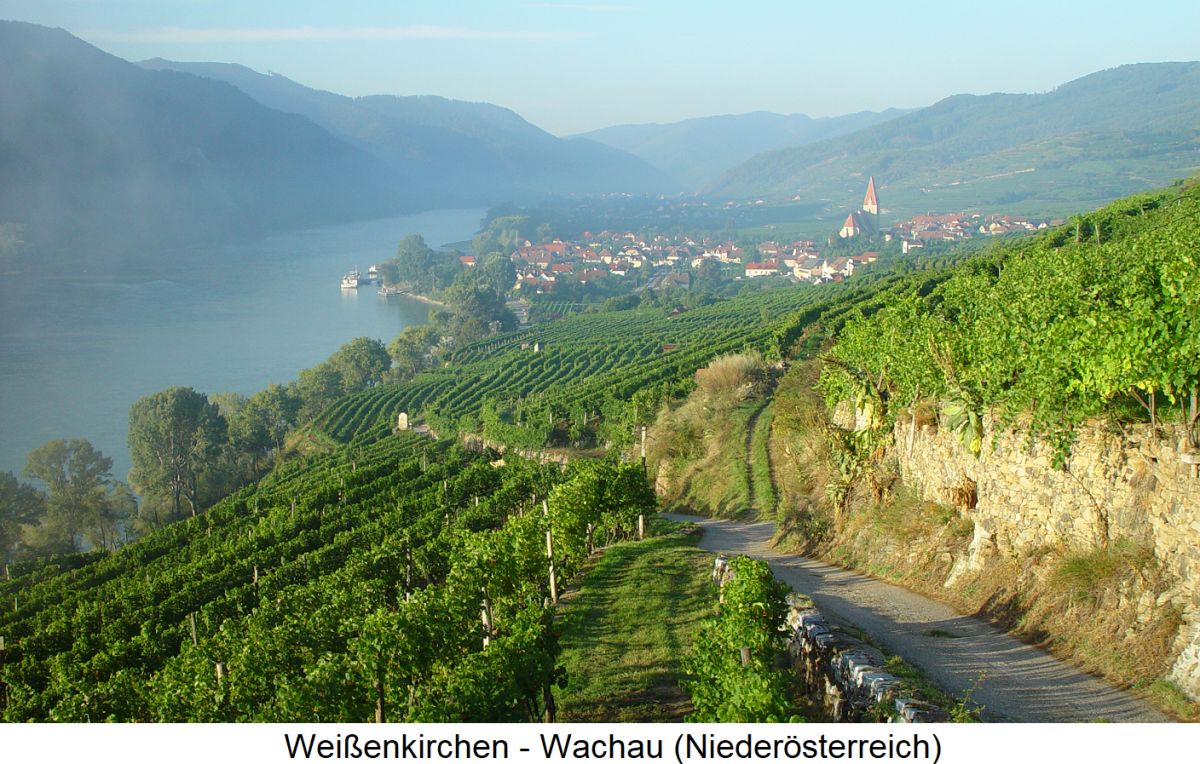 Viticulture on both banks of the Danube

The Wachau wine-growing communities extend mainly to the left and some to the right of the Danube. The communities on the left bank with their most important vineyards (Lagen) are: