Abbreviation of Very Very Extra Superior Old Pale (particularly excellent, old and light) as an indication of the length of maturation or quality designation; see under Cognac.

Probably the most famous brandy in the world, Trebbiano is named after the town of the same name in the département of Charente, immediately north of Bordeaux in south-western France near the Atlantic coast. When the Roman general Julius Caesar (100-44 BC) conquered Gaul, his legionaries allegedly brought the Trebbiano gra pe from their homeland, which later became the main grape variety for Cognac. According to legend, the name of the Cognac region goes back to the Roman general Comnus. In the 12th century, spriting appeared, the preservation of a wine by adding wine spirit. It also turned out that wine from the Cognac region was particularly suitable for distilling. Around 1530, the Dutch introduced the art of distillation to this area, calling the wine distillates "Brandewijn", from which the English term brandy was derived. At that time, it was common to produce distillates by single distillation, as is still the case today with Armagnac. 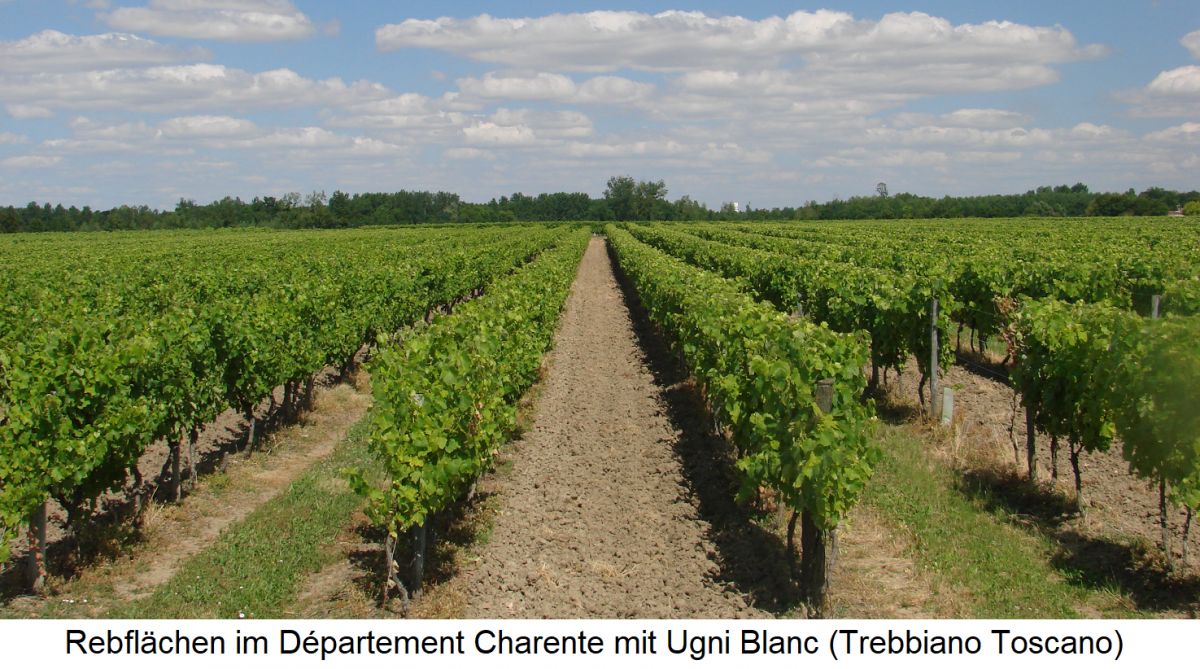 According to legend, the invention of cognac by double distillation is attributed to the Chevalier de la Croix Maron, Seigneur de Segonzac (ancestor of the cognac-producing Castelbajac family) at the end of the 16th century. The deeply religious knight is said to have dreamt that the devil wanted to steal his soul by burning it out of him in a cauldron. Through his unshakeable faith, however, he survived the ordeal unscathed. And a second attempt at distillation by the devil was also unsuccessful, so the knight had the idea of extracting the soul of the brandy with a second distillation. The new drink quickly caught on, and the Dutchman Augustin Godet was the first to receive state permission to export cognac. A certain Jean Martell settled in Cognac in 1715 and produced brandy, followed by Richard Hennessy and others who are still among the most renowned brands today.

Area of origin and grape varieties

Around 1870, phylloxera came to the area and also destroyed many vineyards in the Charente. Today's vineyard area of around 75,000 hectares is only a third of what it was then. The basis for 90% of Cognac production is mainly Saint-Émilion/Ugni Blanc (Trebbiano Toscano), as well as Colombard and, to a lesser extent, Folle Blanche. In 2005, the new variety Folignan was additionally permitted with a maximum of 10% of the vineyard area per farm. As early as 1860, the French geologist Henri Coquand (1813-1881) and a professional brandy taster were commissioned to classify the region according to quality. But it was not until 1909 that the boundaries and...