The mostly colourless spirit (Russian Wässerchen, Polish Wódka or Woda) with 40% vol. alcohol content is distilled from carbohydrate-containing raw materials. Cereals are used (the best qualities are from rye), potatoes or molasses, and in Australia, Italy, France and the USA grapes are also used. Characteristic is the almost neutral, slightly sweetish taste due to the absence of fusel oils and any artificial flavouring, as is common in many other spirits. First the mash is fermented, the resulting alcohol is distilled several times and then filtered to remove all aromatic substances. Maturation as for example with brandy or whisky is not necessary. According to written records, the first vodka was distilled as early as 1405 in the former Kingdom of Poland. Today, the largest vodka producers are Russia and Ukraine. In Russia, the toast "no Zdorowje" (in German "auf die Gesundheit") is traditionally drunk on many (to all) occasions to drink vodka from the traditional vodka glass "Stopka". 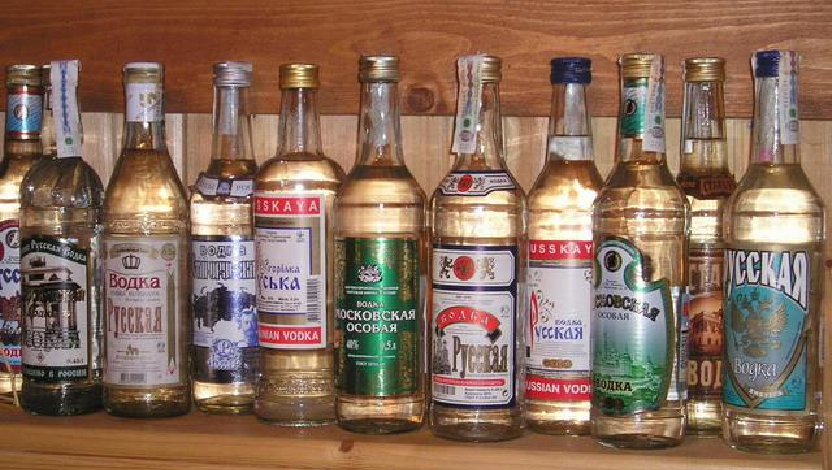 Vodka is, so to speak, the Russian national drink, but it has always been affected by prohibitive measures. Tsar Nicholas II (1868-1918) banned the serving and sale of vodka at the outbreak of the First World War in 1914, but this led to a slump in state revenues by a third. The Bolsheviks completely banned the production and sale of all types of alcohol from the time they came to power, but had to abandon this ban again in 1925 for financial reasons. Under Stalin (1878-1953), a considerable part of the state budget was financed from the profits of the state vodka monopoly. During the Second World War, vodka cations were introduced for the soldiers of the Red Army. In the 1980s, under Michael Gorbachev, there were severe restrictions to combat alcoholism, but as with other alcohol bans such as those in the USA, this had rather the opposite effect. Vodka is a popular ingredient in cocktails such as Bloody Mary, Vodka Lemon and Vodka Martini (vodka instead of gin) and for alcopops.