The saint, also known as Veit, was born as the son of a senator in Mazzara in Sicily and died as a martyr around 304. The name means "The Wood", his day of remembrance is 15 June. Under Emperor Diocletian (243-316) he professed the forbidden Christian faith. According to legend, the execution with two of his companions resulted in a series of miracles. They were thrown into a hot oil kettle, but they emerged unharmed. A lion was set upon them, but he lay tame at their feet and licked them. They were stretched on the rack to be mauled with hooks, but lightning struck the torture apparatus. 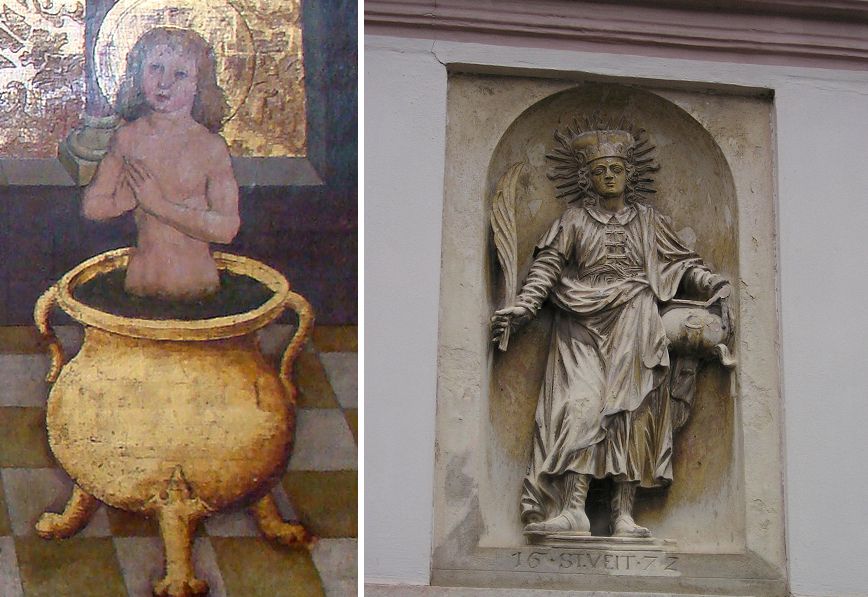 Finally, an earthquake caused the temples to collapse and the torturers were slain by the rubble. Vincent is one of the most venerated saints, as evidenced by 30 patron saints. He is the patron saint of Saxony, Bohemia, Pomerania, Rügen, Mönchengladbach, Prague, Eilwangen and Krems, as well as of the epileptics (St. Vitus' dance), innkeepers, pharmacists, winegrowers, actors, brewers, miners and coppersmiths. Calendar sayings are: 1) O Saint Vitus - do not rain, that it does not break on our wine. 2) When the wine has blossomed on St. Vit, it brings a beautiful wine year. The picture on the left shows the martyrdom in a representation from St. Vitus' altar (1514/17) of St. Vitus' Church in Flein (Baden-Württemberg). The picture on the right is a representation from 1672 in Eichstätt (Upper Bavaria). See also under Farming Rules, Customs in Viticulture and Wine Saints.