Département in the south-east of France on the Mediterranean coast with the capital Toulon in the political region Provence-Alpes-Côte d'Azur. It is named after the river of the same name, but the river basin of the Var has not been in the département since 1859. It is framed by the departments Bouches-du-Rhône (west), Vaucluse )northwest), Alpes de Haute-Provence (north) and Alpes-Maritimes (east). The south of the département is formed by the Mediterranean coast with the western Côte d'Azur. Var is the largest French producer of cut flowers. Almost half of the agricultural area is used for wine growing. The wine-growing areas belong to the Provence wine region. The AOC areas are Bandol, Côtes de Provence (a small part of which lies in the département Bouches-du-Rhône) and in this as the enclave Coteaux Varois. 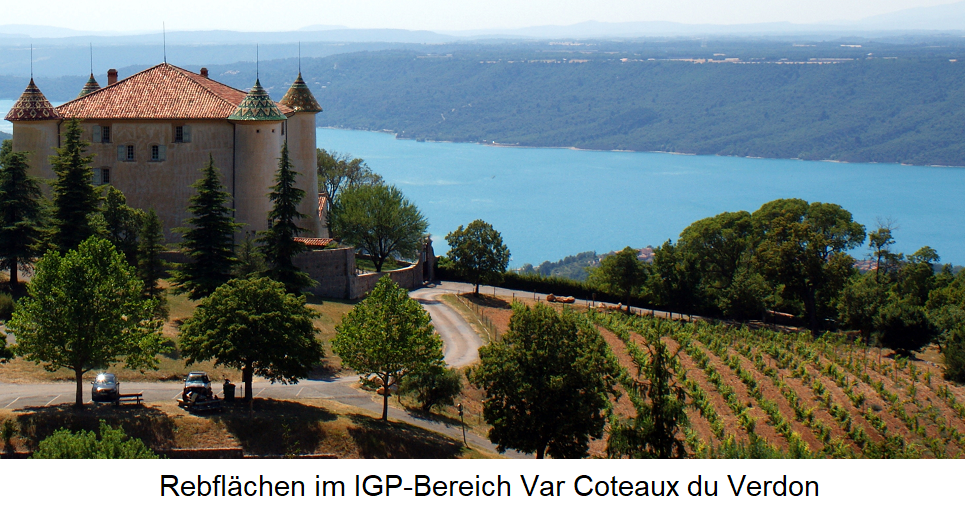 The IGP area covering the entire département is called Var, which can be supplemented by the narrower geographical names Argens, Coteaux du Verdon and Sainte Baume (these used to be independent VdP areas). Other independent IGP areas are Mont-Caume and Maures. Var is also part of the large regional IGP area Méditerranée with other départements.

With about 45%, rosé wines make up a large share of production. They are available in different varieties from very light vins gris to cherry red wines. Red wines are produced to about 50% and only 5% white wines. The most important red wine varieties are Grenache Noir(Garnacha Tinta), Cinsaut, Mourvèdre(Monastrell), Syrah, Cabernet Sauvignon and Carignan Noir(Mazuelo). The main white wine varieties are Grenache Blanc(Garnacha Blanca), Roussanne, Bourboulenc, Rolle(Vermentino), Ugni Blanc(Trebbiano Toscano) and Chardonnay.