Popular name for single locations in the German-speaking world, especially in Germany. The name is probably mostly due to a stony vineyard soil.

This single vineyard is certainly the most famous and best known called Stein. Wines from the legendary "Würzburger Stein" have been known for many centuries under the name "Steinwein". Johann Wolfgang von Goethe (1749-1832) loved this wine. In this regard he wrote to his wife Christiane: "No other wine will taste good to me and I am annoyed when I run out of my favourite drink". However, he did not mention any grape variety, so it could have been a Silvaner or a Riesling but theoretically also another variety. A sweet Würzburger Stein vintage 1540 was probably also the oldest wine that was ever drunk and enjoyed. The year was so exceptionally hot that the Rhine dried up and could be crossed on foot. The wine was made from overripe grapes, kept in a barrel for a very long time and was only bottled in the 17th century. The last of these were owned by King Ludwig I of Bavaria (1786-1868). The London wine merchant Ehrmann bought them at an auction.

One of these bottles of the then 421-year-old wine was served to a select circle of wine connoisseurs in London in 1961, among them the journalist Hugh Johnson. As an introduction, a Rüdesheimer from 1857 and a Johannisberger from 1820 were opened, both wines were completely dead and spoiled and no longer drinkable. This left little hope for the Würzburger Stein, which was opened as the third bottle and highlight of this special tasting. But then there was a surprise, as Johnson writes. The ancient wine had a brown colour and a Madeira-like texture, but it was drinkable. However, one could only enjoy two small sips, then within a few minutes the wine turned into vinegar due to the contact with the air. In the cellar of the famous Bürgerspital, the very last bottle is well protected.

The vineyard, which is mainly oriented to the south to south-southeast and partly to the west-northwest, extends in a shell-shaped manner above Würzburg at an altitude of 210 to 300 meters above sea level with a gradient of 30 to 75%. In some areas it is one of the steepest vineyards in Germany. The areas cover 85 hectares on soils of weathered shell limestone with mostly clayey-clayey and in some places humusy fine soils. The climate is hot, almost Mediterranean; the strong sunlight is reflected by the light-coloured soils. The varieties cultivated here are Silvaner and Riesling, as well asPinot Blanc, Scheurebe, Traminer and Müller-Thurgau. A wayside shrine in the area says that in 1665 Abbot Alberich Degen (1625-1686) of the Roman Catholic Cistercian Order planted the Silvaner here. The majority of the area is shared by the Bürgerspital, Juliusspital and Staatlicher Hofkeller Würzburg vineyards, each with a third. Smaller plots of land also belong to other farms such as Reiss Christian and Weingut Am Stein.

The best plot or "fillet piece" is the area in the middle of the Stein vineyard, which is in the sole possession of the Bürgerspital and is called Harfe. The section at an altitude of 210 to 250 metres above sea level, with 50 to 60% in the upper part and 30 to 50% slope in the lower part, comprises almost eight hectares of vineyards on the same soil. This area is divided diagonally by a landscaped climb, the Rotkreuzsteige, so that it has the shape of an upside-down harp. The rows of vines represent the strings of the harp. The name harp or earlier "Harpfe" first appears in documents in the second half of the 17th century.

The vineyard, which faces southwest to west and south-southeast on the Gewann near the village of Stetten, at an altitude of 230 to 280 metres above sea level with a slope gradient of 10 to 50%, comprises 35 hectares of vineyards. The core lies about 80 metres above the Main in a semicircular mountain incision. The best area is considered to be the impact slope with the wins Loch, Rosstal and Stein. The shallow soils consist of skeleton-rich shell limestone in the upper area and of foamed lime banks in the lower area. The upper soil is barren and forces the vines to develop roots that penetrate deep into the shell limestone. The Silvaner and Riesling varieties in particular are cultivated here. The Baldauf, Höfling Klaus, Weingut Am Stein and Winzerfamilie Koch wineries have a share of the vineyards. 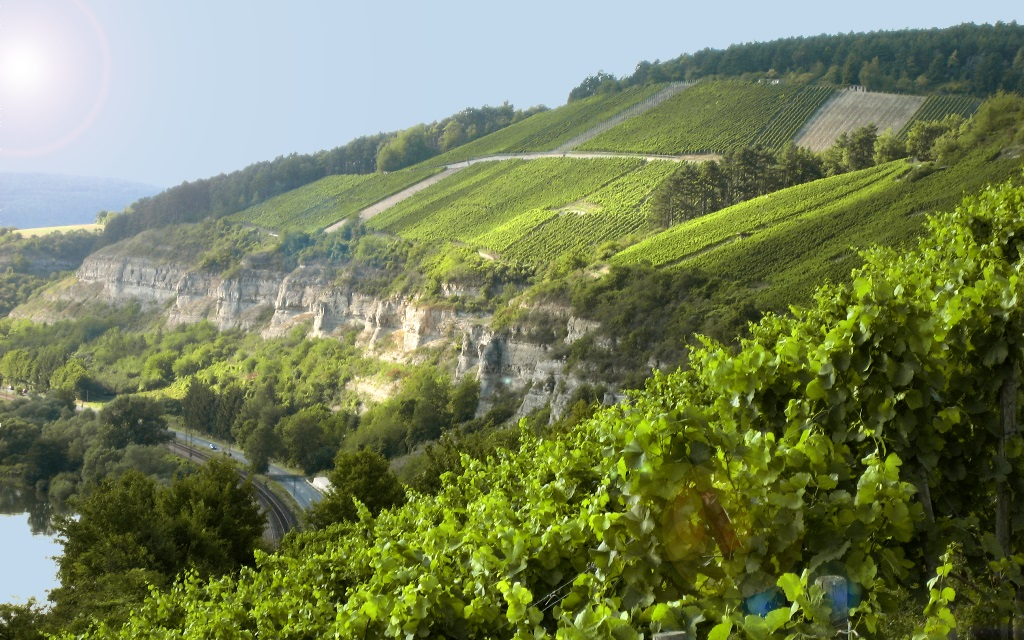