Grapes are grown in about 100 of the more than 200 countries of the world. In most of them, wine is also made from them with varying proportions. For the production of quality wine, certain climatic and weather conditions are required (see under Wine Growing Qualities). Areas with optimal conditions for viticulture are usually relatively small (see under Origin). The following sections deal with the world's vineyards and wine production. The source was the OIV Bulletin of 2012 (the last year currently published there). The vast majority of vineyards are located in the vine belts at latitudes 40 to 50 degrees north and 30 to 40 degrees south: 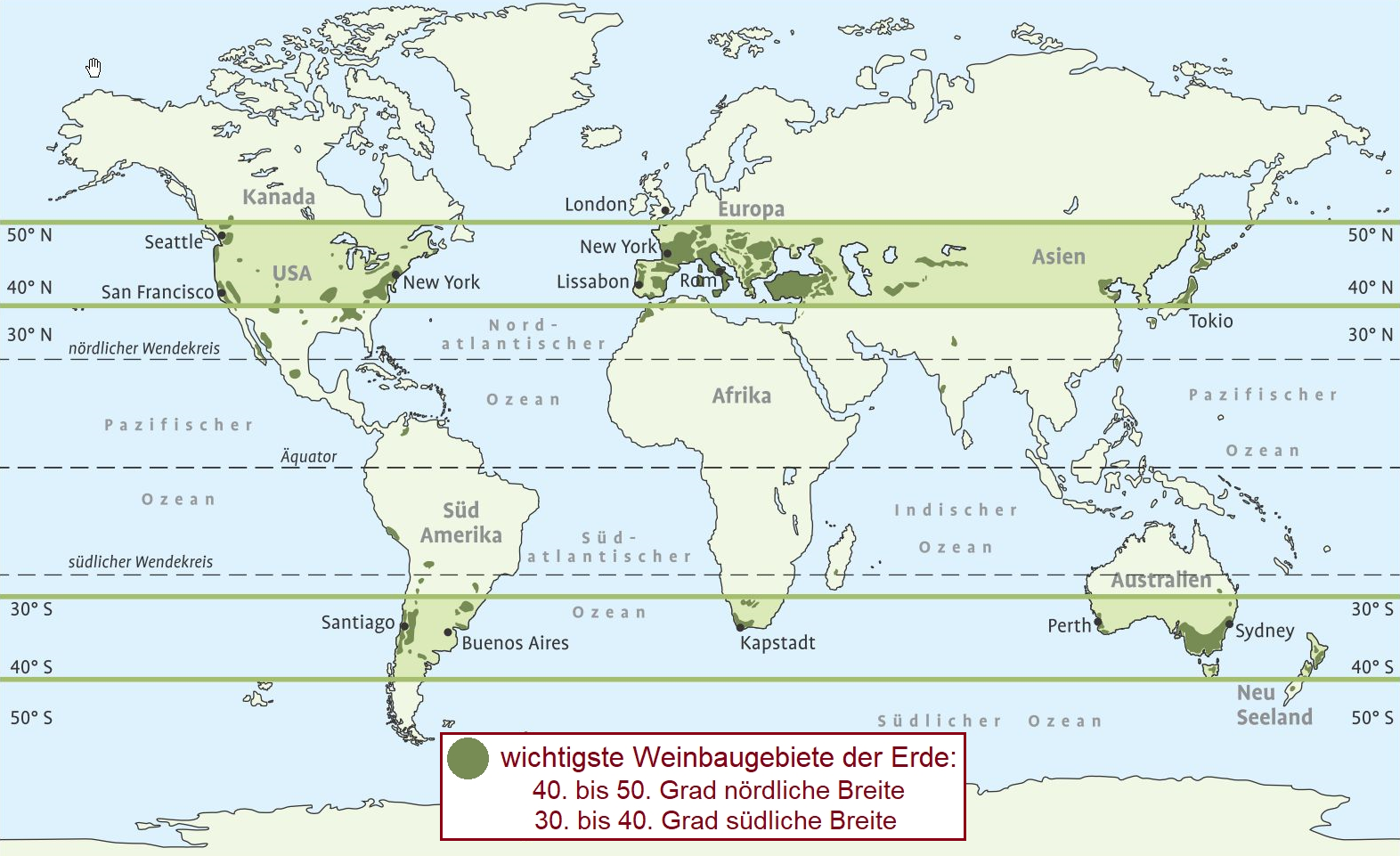 After strong growth until the end of the 1970s, vineyards, especially in Europe, declined steadily until the end of the 1990s. From the mid-1980s onwards, the main reasons were the grubbing-up programme decreed by the then Secretary-General Mikhail Gorbachev (*1931) as a measure against alcoholism in the USSR, and the grubbing-up premiums in the European Union, which had a particularly strong impact in Italy, France and Spain. The three-year period during which the EU granted permanent abandonment premiums expired in 2011. Despite this, there was a global surplus production, which means that around 5 to 10% more wine was produced than consumed. Within the EU there were therefore prioritised countermeasures such as compulsory distillation.

Between 1998 and 2002, the area under vines increased again, but since 2003 the world area under vines has been declining again, despite an increase in grape production. This is due to higher yields, especially from Asian producers with the artificial irrigation practised there. In Europe there was a reduction of 885,000 hectares (18%) between 2000 and 2012. The global area was reduced by 221,000 hectares (3%) in these 12 years. Strong growth in Asia has been particularly strong in China and India with 377,000 hectares (27%) and America with 151,000 hectares (17%). In Asia, a significant proportion of vineyards is dedicated to the production of non-wine products, particularly India, Iran, Turkey and Syria.

In 2012, a total of 258 million hectolitres or 25.8 billion litres of wine were produced worldwide. This corresponds to 34.4 billion 0.75-liter bouteilles or a cube with 300 meters of side length. However, only about half of this is actually bottled, the other half in other containers. Europe's high share of wine production, at around two thirds, in contrast to the area under vines, which is "only" 55%, shows on the one hand the higher proportion of table grapes and raisins in the other continents, and on the other hand the lower yields and thus higher quantities of quality wine in Europe. About one third of the volume of wine was exported (see also Wine Trade). Wine production volumes in million hectolitres in comparison between the two years 2000 and 2012:

A list of countries ranked according to the area under vines in 2012 shows that the ranking according to wine production is sometimes completely different. For example, Turkey is only in 32nd place in terms of production, but in 5th place according to vineyard area. The reason is simply that table grapes or raisins are produced there for the most part (also due to the ban on alcohol for devout Muslims). The greatest growth is in China, where the area under vines has increased more than three times in only 12 years. Many major wine companies are investing there to avoid climate change - because China is profiting from it. Other major newcomers since 2000 in terms of vineyards were Australia, Chile and New Zealand in particular, while Bulgaria, Croatia, Mexico, Tajikistan, Hungary and Cyprus were major drop-outs.