This is a gentle form of pruning, named after Marco Simonit and Pierpaolo Sirch, wine experts from the Italian Friuli region. Colloquially known as "gentle pruning" or "healthy pruning". The method developed in the 1980s is nothing fundamentally new, but is based on very old experiences or practices that have been adapted to the requirements of modern viticulture. The focus is on the health of the vine with a significant extension of the life cycle of the vine to at least 50 years, i.e. twice the current average age. Thus, the philosophy of high quality of old vines, already considered obsolete in some cases, is regaining importance.

According to Simonit and Sirch, the longevity of a vine depends above all on correct pruning that does not damage the vital parts. The Albarello bush training method(gobelet), typical of the Mediterranean region, is a particular guarantee of longevity, allowing pruning to be carried out mainly on young wood. A cut on old wood, on the other hand, leaves a wound from the age of three years on, which damages the plant's vessels. The penetration of wood fungi is made easier and is the cause of wood diseases such as Esca or eutypiosis. The method is to always proceed on young wood with careful cuts

In concrete terms, this means cutting only one to a maximum of two years old wood and always leaving the newly cut shoot at the base of the previous year's cone. At the same time, a cone is cut on the opposite side of the log head. Cones and cut-off shoots are thus connected to already developed leading tissues and always stand on the same vegetation cone, which forms a branch-like continuation of the vine trunk over the years as it grows thicker. The picture shows a Riesling vine before the cut. Last year the plant was pruned for the first time using the new method; the two new exits are visible: 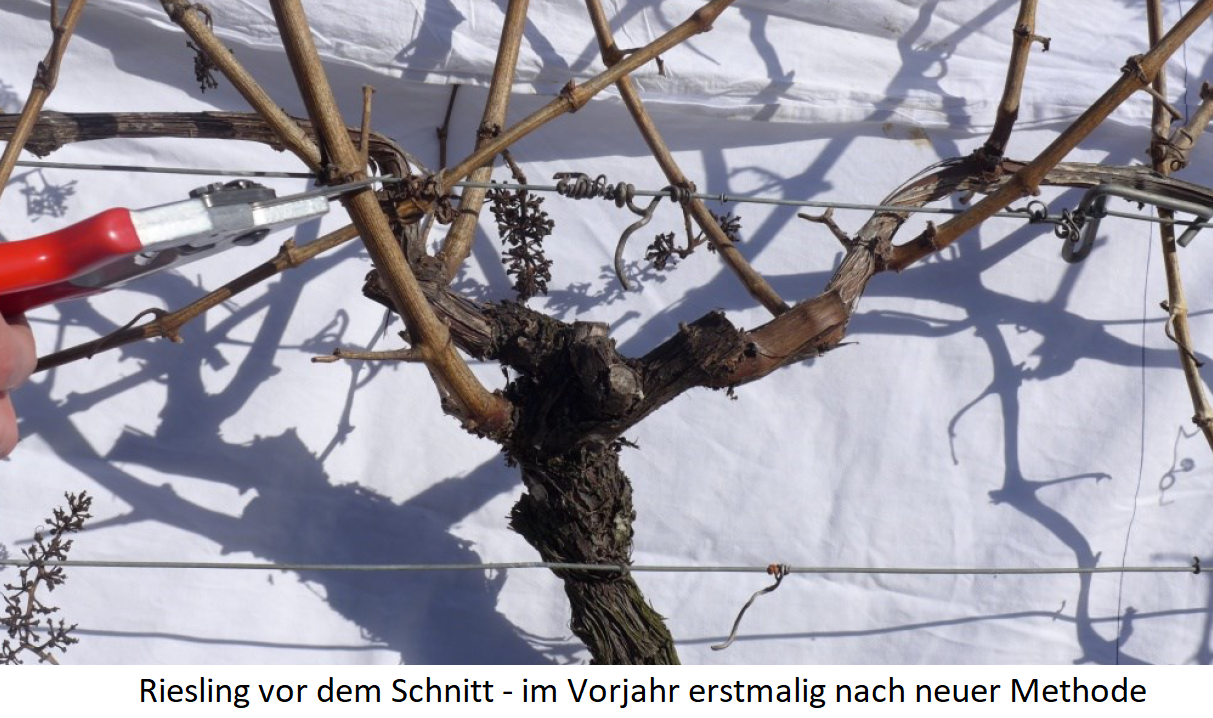 The project of the two has now been extended to a long-term scientific study in vineyards in the five Italian regions of Friuli Venezia Giulia, Lombardy, Piedmont, Sicily and Tuscany. This is supported by Prof. Attilio Scienza, head of the Viticulture and Oenology Department at the University of Milan, and Prof. Laura Mugnai from the University of Florence, Viticulture and Oenology Department. The two winegrowing pioneers have since been awarded the honorary title of "Pruning Guys". See also a list of all systems under Educational Form and all activities in the vineyard under Vineyard Care.