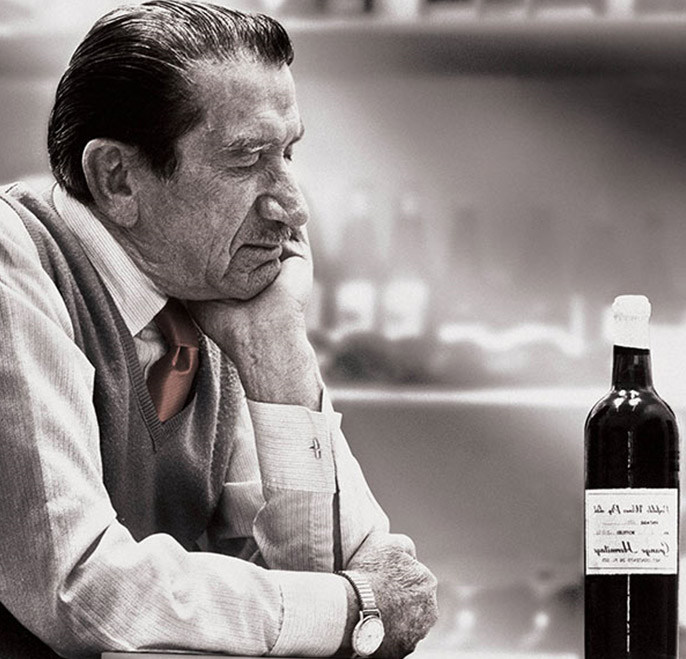 The famous Australian wine icon Max Schubert (1915-1994) was born in the Barossa Valley (state of South Australia) to parents of German descent. In 1949 he became the responsible cellar master at Penfolds Winery. He was sent to Spain in 1950 to study the production of sherry, because at that time in Australia mainly wines in port or sherry style were produced. Afterwards he visited the Bordeaux region and there he had the idea to create a Bordeaux-style red wine in his home country as well.

Without the knowledge of his employers he began to experiment. The first vintage was 1951, a red wine from Shiraz and some Cabernet Sauvignon, matured in small French oak barrels, which was presented to the public in 1956. Schubert named the wine "Grange Hermitage" after the Penfold House and the name for Shiraz that is common in Australia. The first two vintages had to be given away and Max Schubert was reprimanded by the management and expressly forbidden to continue working on the subject.

But he continued with his attempts secretly, he presented the 1955 vintage in 1962. It was an overwhelming success and the Hermitage Grange was described as the greatest wine ever produced in Australia. For export to Europe, France complained about the "Hermitage" part of the name, so from the 1990 vintage onwards, the wine was called only "Grange". It is a so called multi-district-blend, the basis is Shiraz from the Barossa Valley with a small part from McLaren Vale and 10% Cabernet Sauvignon from Coonawarra. Schubert set himself a monument with this wine and was therefore called "Big Max" or "Mister Grange". A 1951 vintage was sold at an auction in Melbourne in 2004 for an incredible 52,211 Australian dollars (US$ 30,581). In 1990 Max Schubert finally received the prestigious O'Shea Award for his significant contributions to Australian viticulture.