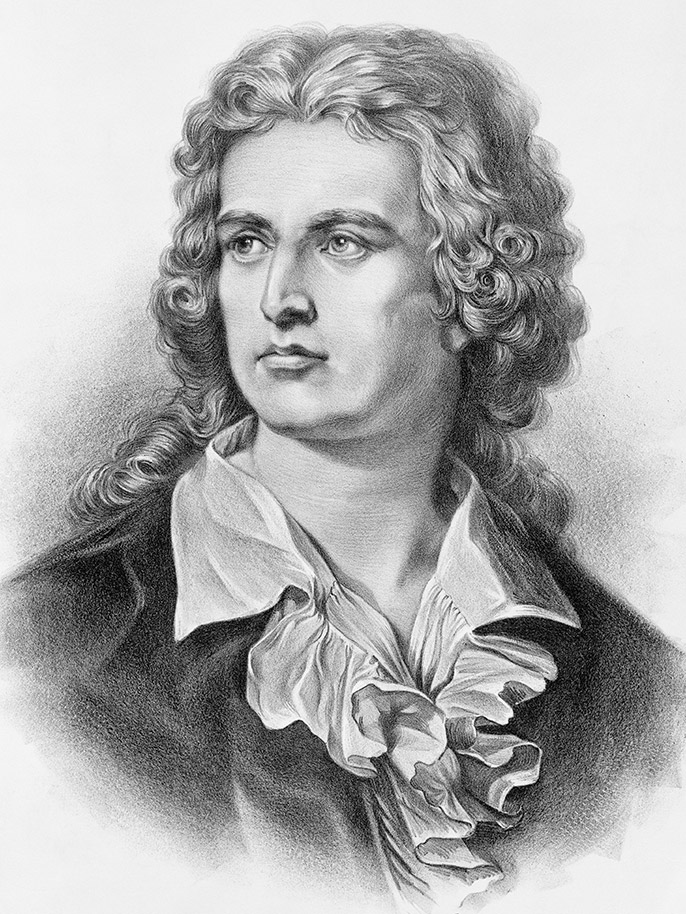 The German playwright Friedrich von Schiller (1759-1805) was born in Marbach am Neckar in Württemberg. Many of his ancestors were winegrowers. His father Johann K. Schiller (1723-1796), as the head of the court gardens and nurseries of Duke Carl Eugen von Württemberg (1728-1793), published a book on viticulture in 1767. His mother Elisabeth D. Schiller was the daughter of an innkeeper. Prejudiced in this respect, he wrote the album verse "Der Name Wirtemberg, schreibt sich vom Wirt am Berg. A Wirtemberger without wine, can he be a Wirtemberger?" By ducal order and against the will of his parents, Schiller had to enter the military academy Karlsschule (Stuttgart) in 1773.

In this institution he was prescribed wine or wine consumption, as it were, on the basis of the school regulations. Duke Carl Eugen, as a great patron of viticulture, had ordered that the pupils should be given up to half a litre of wine a day at mealtimes, depending on their age. According to the doctors' advice, "the enjoyment of wine in hot weather is good for the young people". In a letter dated 29 August 1787 to his publisher Christian G. Körner (1756-1831), Freirdich Schiller describes a celebration in honour of Johann W. von Goethe (1749-1832): "We ate heartily, and Goethe's health was drunk by me in Rhine wine".

Goethe remarked to his secretary: "Schiller never drank much, he was moderate". Schiller obtained his daily requirements of wine from the wine merchants Zapf in Jena and Fröhlich in Erfurt, and also via Goethe (who was a regular customer of these merchants) from Ramann in Erfurt. A letter of thanks to his publisher Johann Friedrich Cotta (1764-1832) proves what a good wine meant to him: "I have received a delicate white port from Bremen, for which I thank you, dearest friend, most sincerely. It is a true oil of life that will strengthen the heart and bowels". Friedrich Schiller also mentioned various wines in some of his most famous works, for example the Malaga in "Kabale und Liebe", a Burgundy in "Die Räuber" and in the second part of the Walleinstein drama "Die Piccolomini" in the following dispute:

Terzky: The wine speaks from him! Don't listen to him, I beg you.
Isolani: The wine doesn't invent anything, it just talks it out.

In May 1803 he wrote the 13-stripe poem "The Victory Festival". It was intended as a thoughtful social song or table song for an educated group of men. In it, Schiller praises the wine: "Drink it up, the drink of the refreshment, And forget the great pain. Wonderful is Bacchus' gift, balm for the torn heart". After his death an inventory was made in his wine cellar - the following were found: 61 Bouteilles Malaga, 35 Bourgogne (Burgundy), 22 Champagne, 10 White Port, 2 Leistenwein (?), 17 Ruster (Burgenland, Austria), 6 Oedenburger (Sopron, Hungary), 34 Franconian wines, 4 half Falernian (?), 5 Rum and 4 Muscatel.