Latin name (root phylloxera) for the phylloxera occurring underground at the roots of the vine; see there.

This most dangerous of all vine pests (Daktulosphaira vitifoliae, Viteus vitifoliae) is an insect of the order Plant Aphids (Homoptera), suborder Aphidina and family Phylloxeridae. The phylloxera exclusively attacks the grapevine, sucking on the leaves and/or the roots and releasing its saliva into the sap pathways, causing galls (growths) which then serve as oviposition and food. Different species are suspected due to different behavioural patterns towards the vine. The German biologist Dr. Carl Börner (1880-1953) distinguished between a less dangerous long-nosed phylloxera and a more harmful short-nosed phylloxera. From the first infestation, it usually takes a maximum of three years for the vine to die and be completely destroyed due to secondary effects such as nutrient deficiency and root rot. The French scientist Jules Émile Planchon (1823-1888) aptly named the vine pest "Phylloxera vastatrix" (devastating louse) when he identified it in France in 1868.

The life cycle is highly dependent on the species of grapevine attacked, namely European gra pevine or American grapevine. It takes place either in the form of a complete cycle or a continuous cycle between the vine (above ground) and the root (below ground) or only on leaves (only above ground) or only on roots (only below ground) and thus a shortened cycle. There are parthenogenetic (virgin production from unfertilised eggs) and sexual generations. According to the place of infestation, a distinction is made between the yellow-green 1.5 mm long leaf aphid (Gallicola = leaf gall aphid) and the yellow-brown 1.35 mm long root aphid (Radicicola = root louse). The latter is much more dangerous, as it damages the leading tissue, which leads to a lack of water and nutrients. Infestation of the leaves, on the other hand, is usually not life-threatening. Among the grapevine species there are those that form both leaf and root galls, the root galls but no leaf galls, and the leaf galls but no root galls. The group of completely resistant grapevine species forms neither leaf nor root galls.

In Europe, mostly only the reproduction by the root aphids takes place, while the full cycle only takes place in America. Only the above-ground cycle produces offspring with new genetic material, as there are only males and females here. In root lice, there are only females, which reproduce parthenogenetically and lay 600 eggs. Young hatchlings do not infest the roots immediately, but overwinter deep in the soil. In spring, they puncture the roots with their proboscis (at half body length) and introduce saliva into the tissue. As an almost panic defence reaction of the vine, nodular thickened growths form. The aphids then feed on these soft structures, sucking them up. The pest can therefore only live by forming galls, because the hard roots themselves could not be gnawed directly.

In Central Europe, there are usually four to six generations of phylloxera per year. The young aphids of the last generation (Hiemalen) form the overwintering form. Towards the end of midsummer, nymphs develop, which are larvae with wing attachments. These leave the soil and develop into winged vine lice (sexuparae) after their last moult. Due to their ability to fly, they can spread relatively quickly to other vineyards, even over long distances, and multiply there. The winged pests lay small male and large female eggs on the perennial bark of the vine, which hatch into the sexuales. These cannot ingest food and have the sole task of copulation during their life, which lasts only about eight days.

The mated females lay a single fertilised olive-green winter egg in a bark crack. In spring, these eggs hatch into the aphids, which only form leaf galls on American grapevine species (Vitis vinifera is resistant on the leaves) and lay up to 1,200 eggs. Two types of larvae hatch from these after eight to ten days. One of them forms leaf galls again, especially on younger leaves. They reproduce parthenogenetically with six to eight generations per year. The others are leaf-born root aphids and seek out the vine roots in the soil. There they complete the underground development cycle or start it anew. An overwintered phylloxera with 1,000 eggs produces around 25 trillion offspring by autumn. The complex cycle of leaf and root aphids is shown in the diagram: 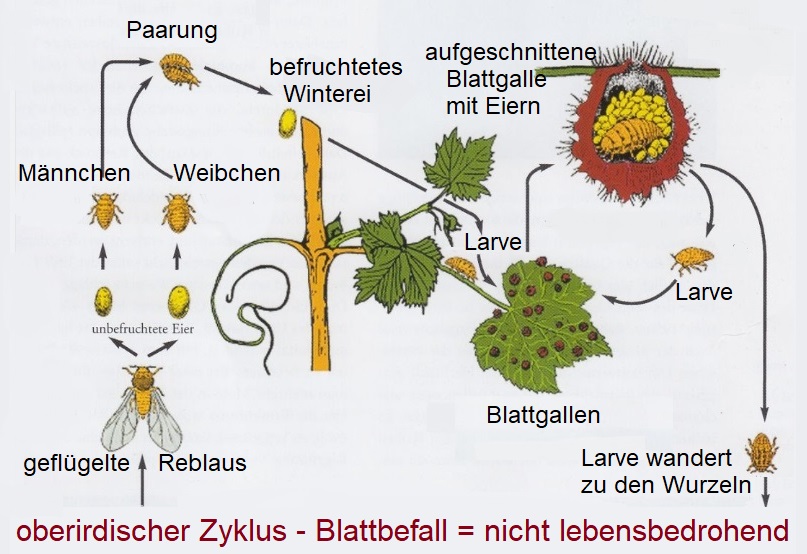 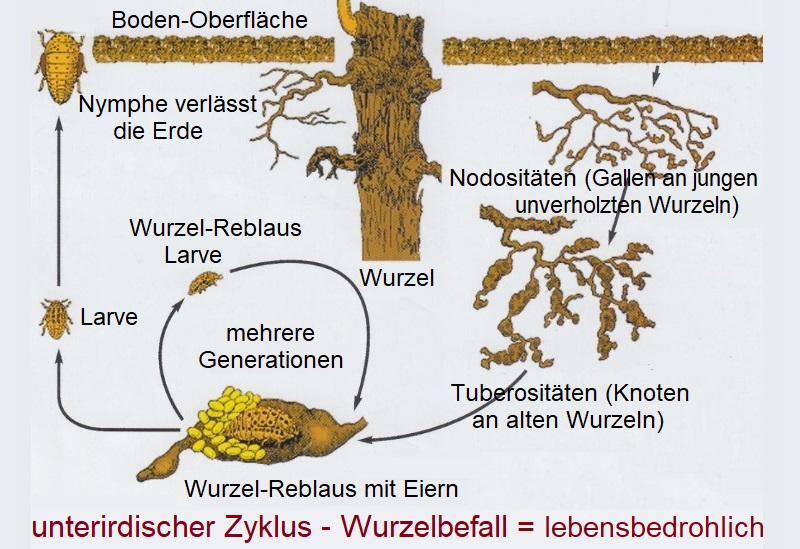 A distinction is made between two root types and thus quite different effects when attacked by phylloxera. In the case of a minor infestation, the young, still unwoody and soft root tips are pricked first. The resulting root galls are called nodosities. They occur not only in the European Vitis vinifera, but also in most American grapevine species, but are relatively harmless and do not lead to the destruction of the vine. In the case of larger infestations, however, the older, woody roots are also pricked and as a result the tuberosities (see picture below) are formed. These are much more dangerous because they can penetrate much deeper into the vascular system of the roots. Certain American grapevine species are immune to both, the most resistant being Vitis cinerea.

The rootstocks of some American vines are resistant to phylloxera...