Above all in the German-speaking area usual designation for a sparkling wine produced according to certain quality criteria (quality sparkling wine). Sparkling wines produced outside of Champagne, even if they have been produced according to Champagne rules, may under no circumstances call themselves Champagne. This is not a question of quality, but of origin. Names used in other countries include Afrodis Oinos (Greece), Cava (Spain), Crémant (outside Champagne in France, but also other countries), Pezsgő (Hungary), Sparkling Wine (overseas) and Spumante (Italy). But the steps are very similar and described under Champagne. In contrast to champagne, the second fermentation of sparkling wine often takes place in steel tanks using the pressure tank method, the méthode charmat, named after its inventor. Here the wine is fermented in a pressure tank after the addition of sugar and yeast and also left on the yeast for a certain time. From there the finished sparkling wine is also filtered under pressure and then bottled. This procedure saves the time-consuming steps of remuage (shaking) and dégorgement (removal of yeast sediment). 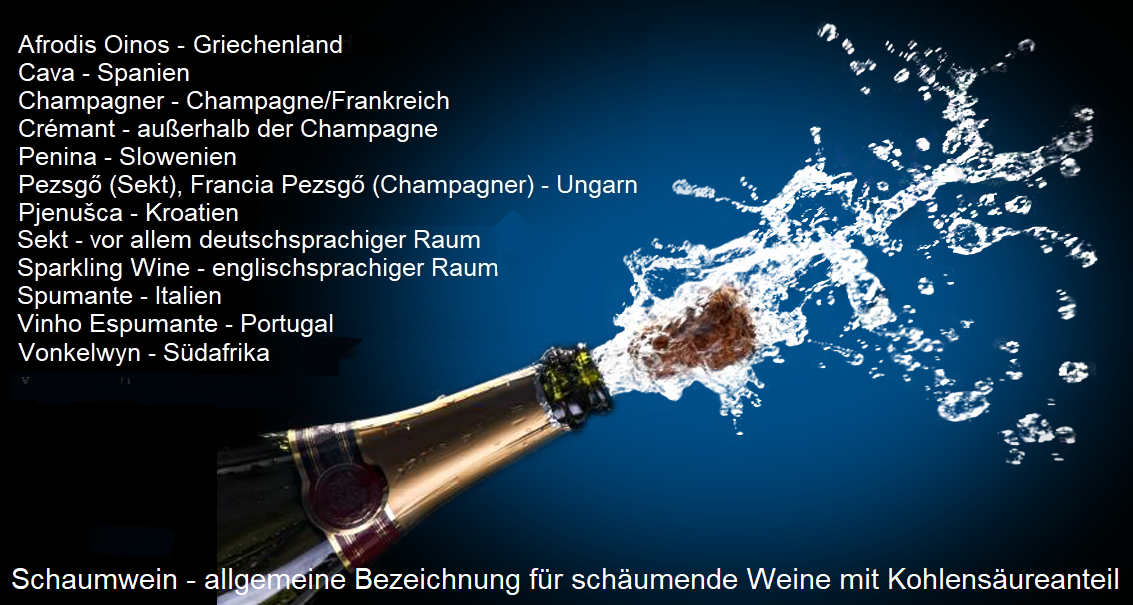 The second difference to champagne is the method of blending. A classic champagne is often (but not exclusively) a cuvée from different sites, vintages and mostly Pinot Noir and Chardonnay. A sparkling wine, on the other hand, is usually made from grapes from the same vineyard and the same vintage. In Germany, mainly Riesling is used for this purpose and in Austria the varieties Welschriesling, Grüner Veltliner and Chardonnay but also others. However, there are also many brands of sparkling wine that are produced according to the classical method, i.e. with bottle fermentation. In this case, depending on the country of production, the label shows the name "Méthode traditionelle" or "Méthode classique", which is common in France, Germany and Austria, and "Metodo tradizionale" or "Metodo classico" in Italy.

How the champagne got its name

The designation "Sekt" is not protected according to its origin, although Germany has been striving for decades to have the name permitted only in countries with a German national language. After long legal disputes, an EU decision in 1975 finally confirmed that this language restriction was discriminatory. Quality sparkling wine may thus be produced worldwide under the name Sekt. Until...