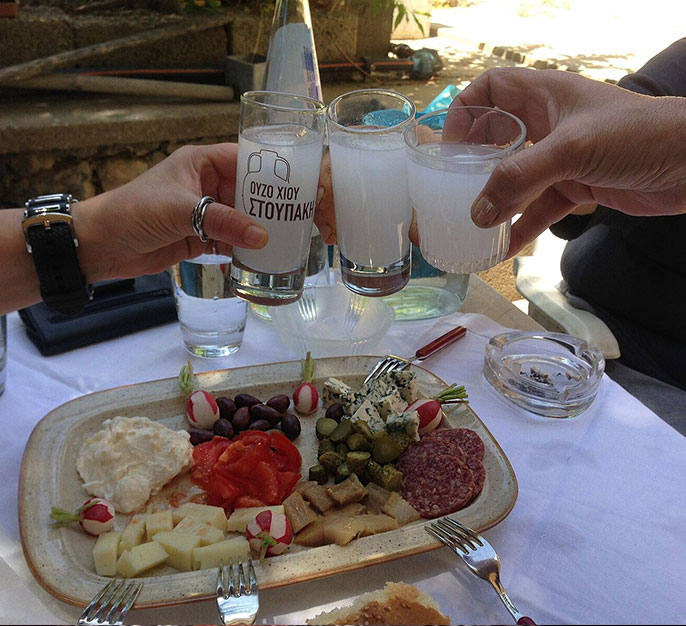 Name for the best-known Greek schnapps, which was already in great demand abroad in the 19th century and was exported to France in a special form - namely flavoured with aniseed. The export to Marseille took place in wooden crates with the Italian inscription "Uso di Massillia" (Uso = for use). This is how the famous brand name came about. In the past, the production was done by double distillation of the press residues, so it was a marc spirit like grappa or Marc, for example. This method of production was gradually changed. Today, wine for distilling is used as the basic material. Before distillation, this is mixed with aromatic oils from anise or mastic resin as well as cinnamon, ginger, fennel and other aromatic substances and distilled three times. Each of the numerous Greek producers has its own, strictly secret recipe for this.

From the first distillation, only the so-called "heart", i.e. the middle fraction, is used for the second and third distillation. The result from the last distillation is then stored to mature. After maturing, the high-proof product is mixed with water before bottling to bring it to an alcohol content of 46% vol. Traditionally, water is often added to ouzo, resulting in a milky discolouration (Louche effect or ouzo effect). Germany alone imports about 10 million bottles a year. One of the largest producers is the Tsantali company, which became famous with the "Olympic" brand. Similar to ouzo is the tsipouro (in Crete tsikoudia) produced in Macedonia, but made from marc.