Name for a wine produced in a similar way to red wine as the fourth coloured wine type besides white wine and rosé. Other designations are alternative wine, amphora wine, Artisan Wine, natural wine, natural wine and raw wine. The sparkling products are called Pétillant naturel or Pét Nat. However, none of these have any wine legal meaning. Orange Wine should not be confused with fruit wine made from oranges such as Tarongino or a wine flavoured with orange peel such as Vino de Naranja (both Spain). However, if the new designation Orange Wine did not exist, it would have to be called a white wine. It is a method that is already thousands of years old. From ancient times until the late Middle Ages, red and white wine grapes were mainly grown mixed in the vineyard, harvested together and subjected to maceration. As a result, considerably more tannins and colorants were added to the wine and, depending on the ratio of white and red grapes and the duration of fermentation, resulted in dark yellow, orange to reddish wines. At that time there were hardly any red wines or white wines with a distinct colour and taste as we know them today. 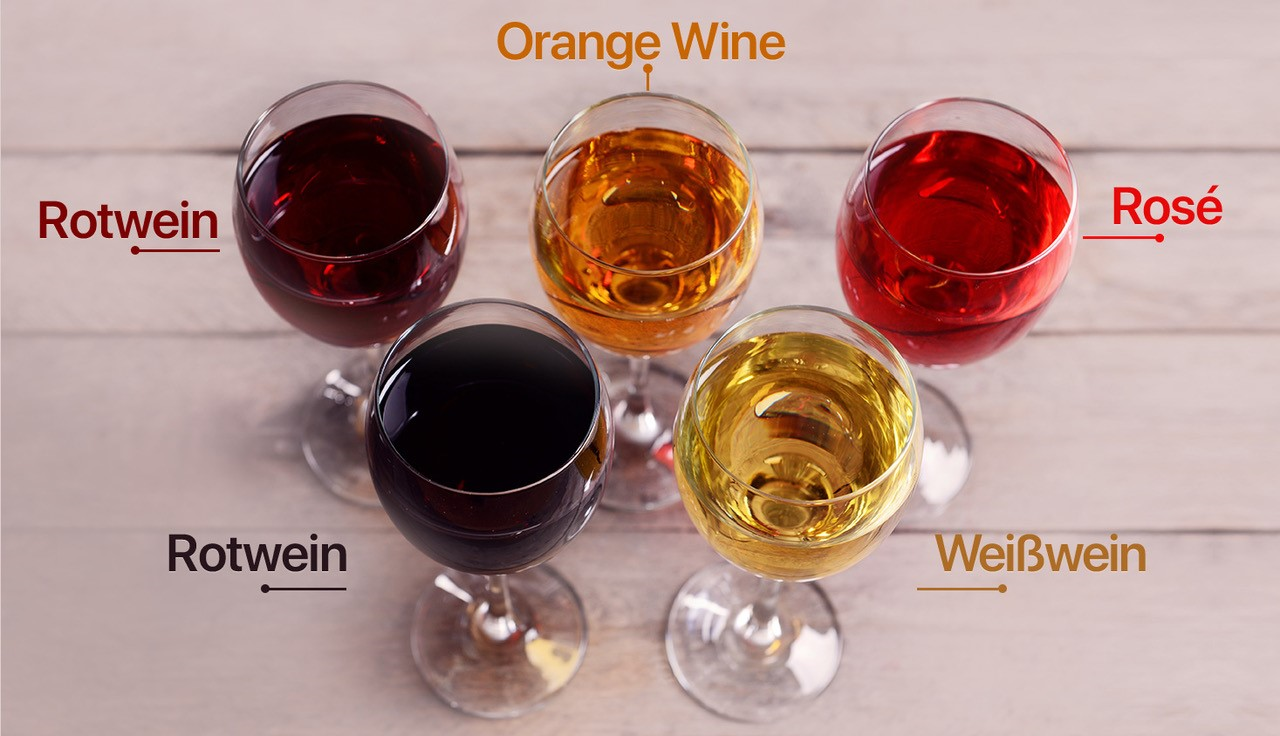 From the mid-1990s onwards, this method of winemaking first came back into fashion with individual winemakers. It is increasingly used in Europe, especially in Germany, France, Georgia, Italy (especially in South Tyrol and Friuli) and Austria, as well as in the former so-called crown lands of the Habsburg monarchy Slovakia, Slovenia and the Czech Republic, but also overseas in California and New Zealand. However, mainly white wine grapes are used. Often any chemical additives, selective yeasts, enzymes etc. are avoided. The vinification often follows the rules of organic or biodynamic viticulture. However, there are no official wine law regulations for the production of a wine to be allowed to call it Orange Wine. Vinification can therefore be carried out in very different ways, although there are common features such as the above-mentioned maceration, minimal intervention and reduced use of resources.

If there is no destemming of the grape skeleton, the result is usually wines richer in tannins. In principle, however, mash fermentation is carried out, often in clay amphorae buried in the earth (as in the cachet method in Georgia). The wine then remains on the mash for a longer time (months). Afterwards it matures in large wooden barrels for years if necessary, is often bottled without filtration and is stored in the bottle for a long time. This gives it a long shelf life, which allows low sulphur content. Increasingly, concrete vessels in the form of so-called concrete eggs are becoming fashionable for fermentation and maturation.

The wines can be extremely different in taste, smell and colour. Especially varieties with reddish berries like Pinot Gris or Roter Veltliner produce a strong orange-red. Due to the mash fermentation there is more stability against oxidation. They are slightly astringent and have subtle aromas of baked apples, pears, nuts, caramel, figs, dried fruits and dates, but little fruitiness. However, especially with bouquet varieties (such as Traminer and here especially Gewürztraminer, Muskateller, Sauvignon Blanc and Scheurebe) the varietal typicity remains quite well preserved. The increasing popularity shows the fact that in Vienna since the year 2012 the "Orange Wine Festival" takes place every year in November.

Wines produced in this way may not be marketed as quality wines. Many would already fail to comply with the sensory test, but this should in no way be understood as a derogatory measure. Whether Orange Wine will ever become an independent wine category with clear wine-law production rules, as is the case with white wine, red wine and rosé, is an open question. This also depends on whether these wines can overcome the current niche existence and appeal to a larger consumer group. A wine law definition could be formulated as follows: Orange Wine is a wine made from (mainly) white wine grapes, in which the fermentation has taken place mainly on the mash. It would also be conceivable, for example, to stipulate that at least 85% of the wine was fermented on the mash (analogous to the stipulation for a single-variety wine).

In Austria, a number of wine-law conditions were defined for orange wine in 2018. Until then, wines with a cloudy or oxidative note, which do not lead to spoilage of the wine, could only be marketed as wine without indication of vintage or grape variety and without indication of a closer origin than Austria. The additional indication "orange wine" was already permitted for mash-fermented white wines, but country wines and quality wines had to be free of defects. Now orange wines can be marketed as country wines, even if they have a cloudy or oxidative note. This means that it is now possible to indicate the vintage, grape variety and wine-growing region on the bottle label.

Certified organic farms may use the English term "Natural Wine" (but not "Raw Wine"). For wines labelled in this way, enrichment for the purpose of increasing alcohol, sweetening and the addition of treatment agents with the exception of bentonite and sulphurous acid are not permitted.