The American botanist, plant physiologist, oenologist and vine grower Dr. Harold Paul Olmo (1909-2006) studied horticulture and genetics at the University of California in Berkeley. Towards the end of the American prohibition, he was appointed in 1931 as Professor of Viticulture and Enology at the reactivated Department of Viticulture and Enology at the University of California in Davis and entrusted by the head of the institute, Albert Julius Winkler (1894-1989), with the task of breeding new grape varieties. He subsequently became the leading vine geneticist of his era. By the time he retired in 1979, he had created several thousand new varieties, some 30 of which were included in the National Variety Lists. 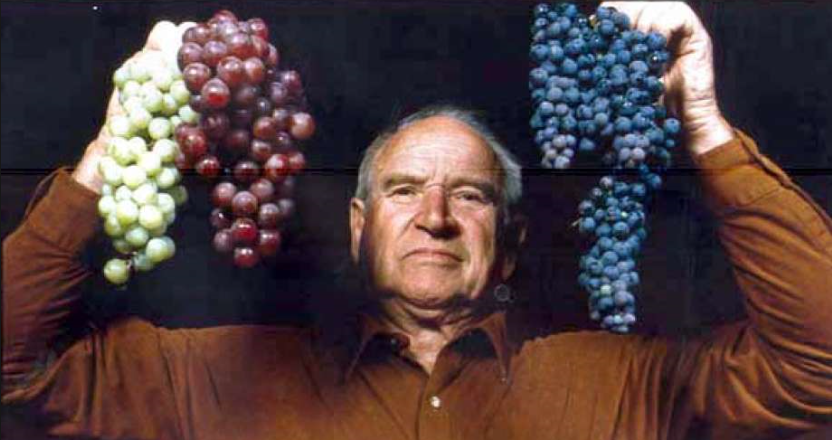 Olmo completed the herbarium created by the US physiologist Maynard A. Amerine (1911-1998) with many grape varieties grown between 1930 and 1980 in California and worldwide. He imported hundreds of varieties from Europe (Greece, Portugal, Spain) and the Middle East, and carried out numerous experiments on the development of rootstocks and the breeding of hybrids. Olmo recognized the enormous potential of the American vine species Vitis rotundifolia in terms of resistance to various vine diseases and, above all, its total phylloxera resistance.

The new varieties he created included Blush Seedless, Calzin, Carmine, Carnelian, Centurion, Christmas Rose, Dawn Seedless, Delight, Early Muscat, Emerald Riesling, Emerald Seedless, Flora, Gold, Niabell, Perlette, Red Globe, Royalty, Rubired, Ruby Cabernet, Ruby Seedless and Symphony. Many of the varieties used in California today were introduced by him, for example the Syrah in 1936, and he has been involved in numerous food and agricultural organization projects for the UN. Last but not least he was also involved in the development of the first mechanical harvesters.

Through his extensive travels in Australia, South America, Europe, India, Afghanistan and Iran, he received the designation "Indiana Jones of viticulture". His extensive consulting activities in his special discipline were also appreciated worldwide. Olmo has received numerous honours and medals for his services to viticulture, including from the American Pomology Society, the Pope, the OIV and the UN. In his retirement he continued to work on the subject of vine breeding.