In the state in the Midwest of the USA with Jefferson City as its capital, viticulture was influenced by immigrants from Germany and Switzerland at the beginning of the 19th century. The area around the town of Dutzow, founded by Germans in 1832, is still called Missouri-Rhineland today. After the American Civil War (1861-1865), Missouri replaced the state of Ohio for some time as the most vine-rich country of the then USA. In 1873 the French biologist Jules Émile Planchon (1823-1888) made a study trip in connection with the phylloxera catastrophe and met Charles Valentine Riley (1843-1895), the entomologist responsible for Missouri. As a result, millions of rootstocks were shipped from state nurseries to France and other countries in the fight against phylloxera. These included varieties created by breeder Hermann Jaeger (1844-1895). At the beginning of the 20th century, Missouri was the nation's second largest wine producer and also gained international renown, but its decline was mainly due to the American prohibition (1920-1933). 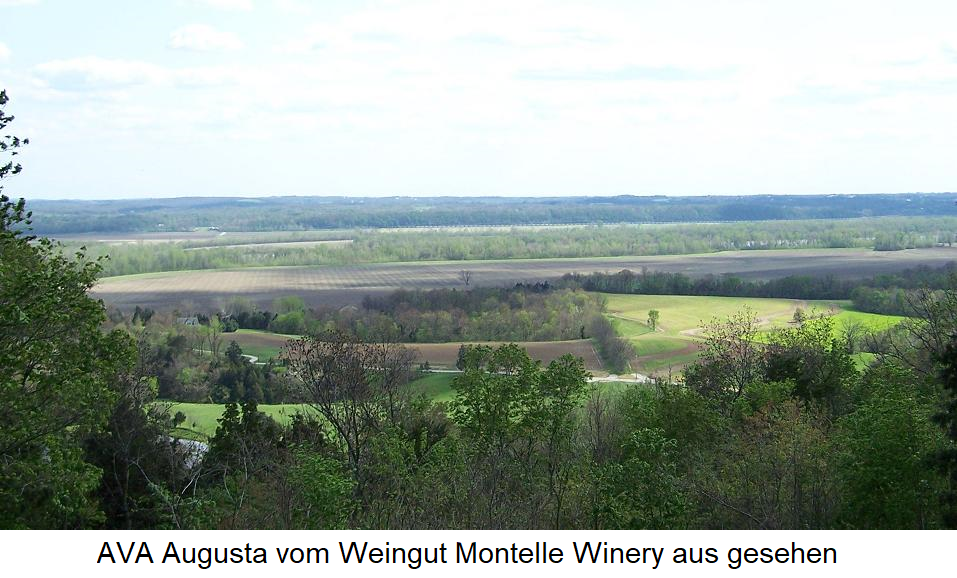 The rebirth and quality boom of the Missouri wine industry in the 1960s and 1970s was largely due to the winemakers Millard Cohen, Howard Nason and Lucian W. Dressel (Mount Pleasant Winery). They caused Augusta to be classified as the first AVA area in the USA in 1980. The climate in Missouri is characterized by harsh winters with blatant temperature fluctuations (frost and thaw). Therefore, almost exclusively frost hardy hybrids and varieties of the species Vitis labrusca are cultivated. The best wines are those from the white varieties Seyval Blanc, Vidal Blanc and Vignoles, as well as from the historic red variety Norton. The hybrid varieties Elvira and Missouri Riesling were also bred in Missouri. Only around Augusta there are also European varieties. Four areas are classified as AVA: Augusta, Hermann, Ozark Highlands and Ozark Mountain. The best known of the approximately 40 producers are Augusta Winery, Blumenhof, Hermannhof (of German origin - founded in 1852), Les Bourgeois, Montelle, Mount Pleasant, St. James and Stone Hill.

Picture: From Agne27 in Wikipedia in English, CC BY-SA 3.0, Link