The tradition-rich winery is located in the municipality of Mertesdorf (Ruwer area) on the outskirts of Trier am Grüneberg in the German Moselle wine region. According to a deed of donation from 633 by the King of the Franks, Dagobert I (608-639), it is attested that the Trier Benedictine monastery of St. Maximin already owned buildings, vineyards and land in Mertesdorf at this time. This was then confirmed in 966 by Emperor Otto I (912-973), the successor of Charlemagne (742-814). However, a large part of the vineyard was only established later. Maximin Grünhaus was managed by the Benedictine Abbey until 1802. In the course of secularisation under Napoleon (1769-1821), the estate was under French administration until 1810. In that year, after an auction, the first secular owner bought the estate, which was then acquired by the great-great-grandfather of the present owner in 1882. Since 1981 the estate has been managed in the sixth generation of the family by Maximin von Schubert, son of Dr. Carl von Schubert. Dipl. Ing. Stefan Kraml acts as administrator and cellar master. 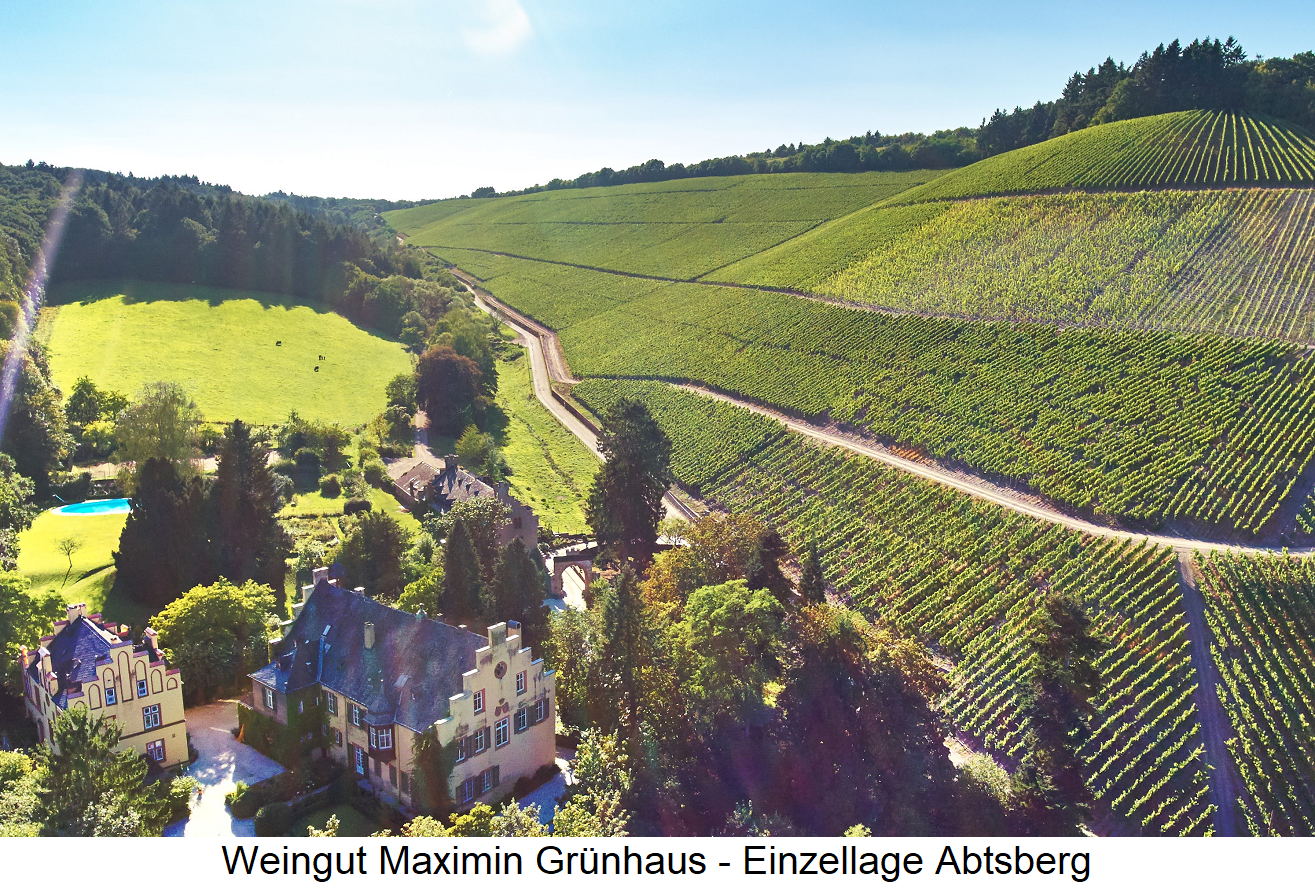 The closed vineyard site Maximin Grünhaus on the southern slope of the Grüneberg comprises a total of 34 hectares of vineyards, which are planted with the varieties Riesling (90%), Pinot Blanc (6%) and Pinot Noir (4%). The name "Grünhaus" (on the Grüneberg) is probably derived from the veins of diabase (greenstone), a marble-like greenish volcanic rock that occurs here sporadically. In addition, the old monastery building was green for centuries. The area consists of the three individual layers (from left to right in the picture) Herrenberg, Abtsberg and Bruderberg, which differ quite considerably in their soil type. In terms of quality, they correspond to the monastic hierarchy of Brothers (wine for the simple monk), Canon (wine for the Maximin Canons) and Abbot (wine for the abbots of St. Maximin Abbey). All three have been in the family monopoly since 1882 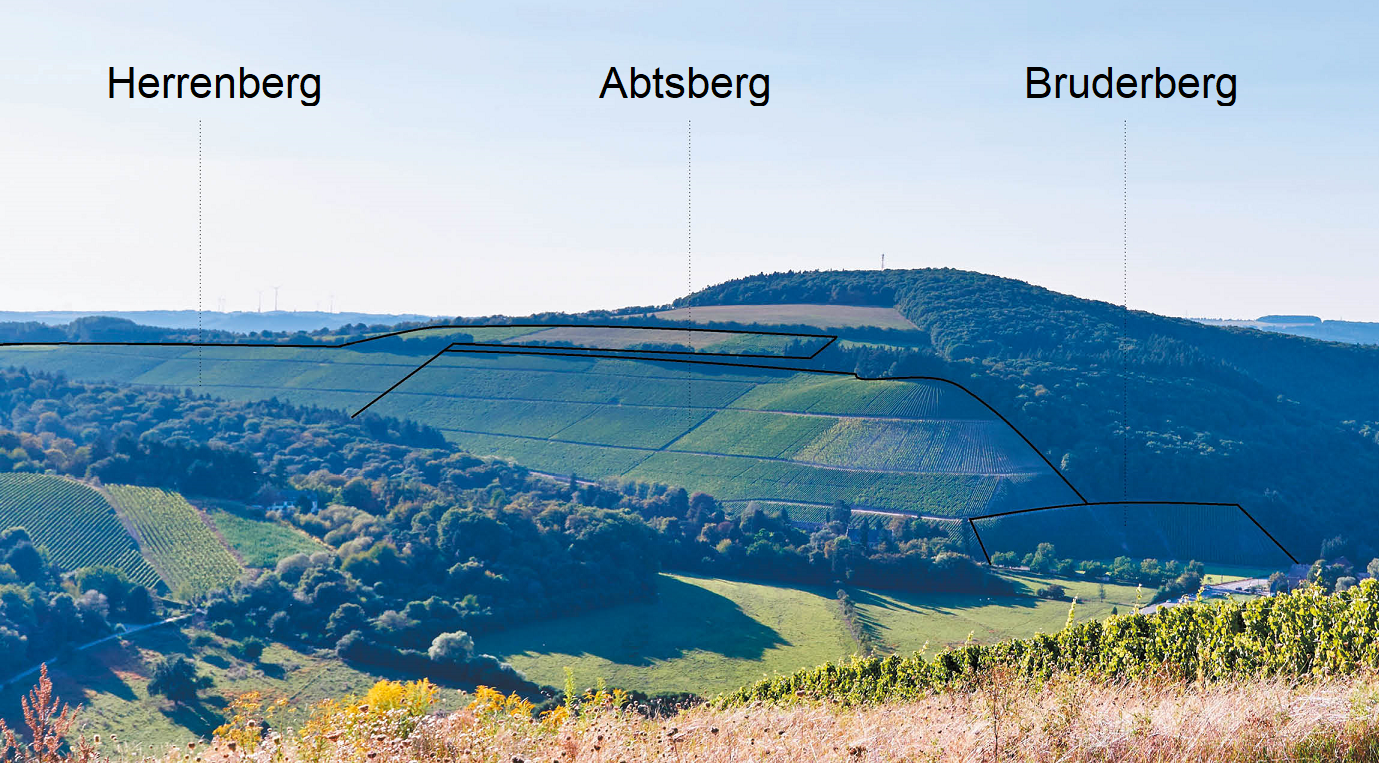 The Abtsberg, which is oriented from south-east to south-west and is in the form of a hilltop at an altitude of 140 to 270 metres above sea level with a slope gradient of 40 to 75%, comprises 14 hectares of vineyards. It was first mentioned in a document in 966. However, viticulture here was probably already practised in the fourth century. This part lies in a side valley of the Ruwer. It is considered to be the most renowned location of the winery. Besides Riesling, Pinot Noir is also cultivated here. The subsoil consists mainly of bluish Devonian slate. The best plots are located in the centre. The continuous surface of the Abstberg forms a flowing transition to the Herrenberg. The soil tends to be shallower and more skeletal than in the Herrenberg, which is reflected in the pronounced minerality of the wines. The wines are characterised by extreme longevity.

The south-east facing Herrenberg vineyard at an altitude of 190 to 290 metres above sea level with a slope gradient of 20 to 60% comprises 19 hectares of vineyards. Besides Riesling, Pinot Blanc is also cultivated here. The part adjoining the Abstberg is very similar to it in terms of soil characteristics and orientation. The rear part is cooler, less steep and is surrounded by the Grüneberg forest. Devonian slate, which appears reddish in the Herrenberg, also dominates here. In the past, the wines were somewhat overshadowed by the wines of the Abtsberg. Due to the changing climatic conditions, today the Rieslings of the two sites are of equal quality. The wines also possess an extraordinary ability to develop and can mature over decades.

The Bruderberg, which is oriented to the east to south-east, at an altitude of 140 to 170 metres above sea level with a slope gradient of 50 to 70%, comprises only one hectare of vineyards, which are exclusively planted with Riesling. It is crossed by a well preserved Roman water pipe. As in the Abtsberg, bluish Devonian slate dominates. The adjoining forest provides a strong shelter from the north-west cold. An early morning sun as well as an early evening shade make it the coolest location of our vineyard, where racy and lively Rieslings are produced. 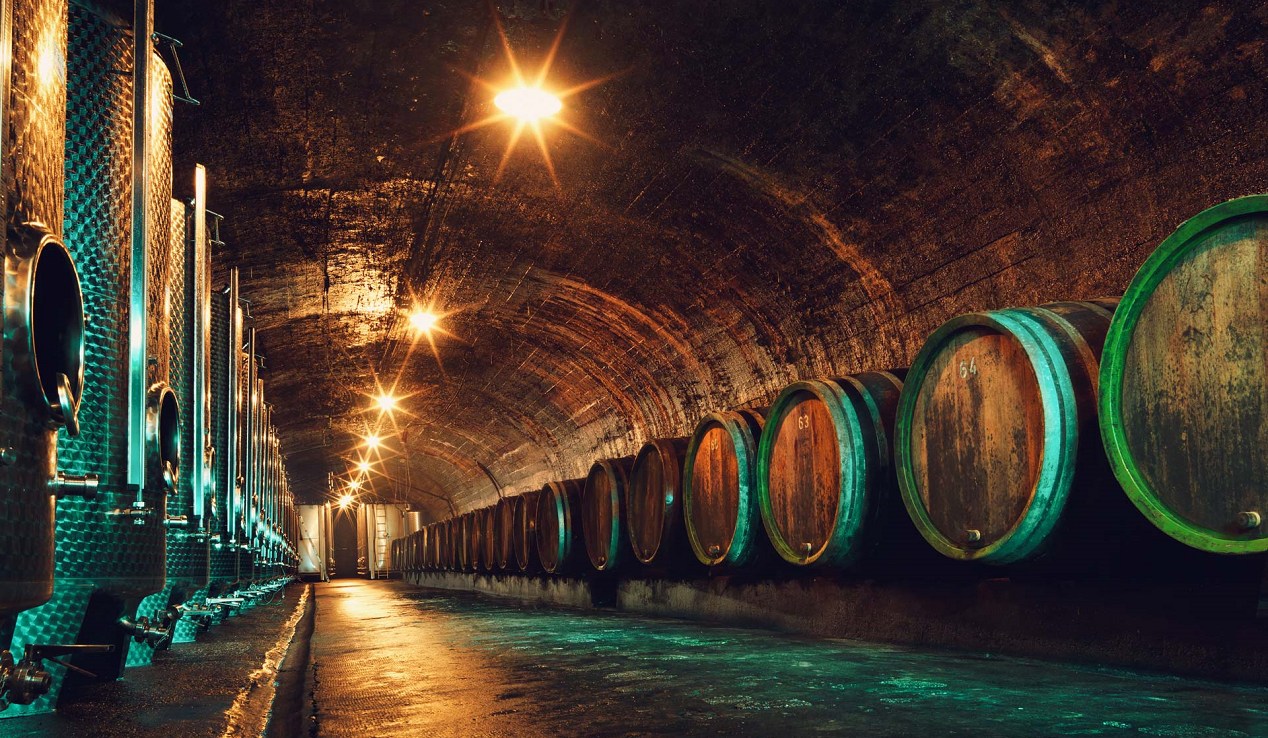 Most of the wines are fermented spontaneously with natural yeasts from the vineyard and the cellar and matured in the cool cellars, mainly in traditional large oak barrels. The historical label shows the coat of arms of the von Schubert family and a view of Grünhaus with the vineyards. For the quality and Kabinett wines, a white-green capsule is used, from the predicate late harvest onwards a long, black and white coat of arms capsule. The winery is a member of the associations VDP (Verband deutscher Prädikatsweingüter) and Die Güter.